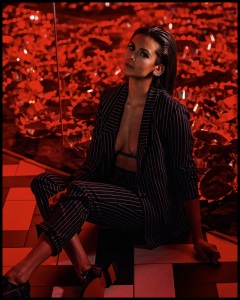 At what point does the laughing stop and the worrying begin? The world has had a laugh at a reality TV star running for President but his rhetoric has gone from generally false to quite possibly dangerous. At what point do people wonder if he can actually lead America and the world or if he’s just spouting policy rather than a plan?

Anyway, it’s time for us to do the links. Let’s get started with Nina Dobrev.

After Donald Trump announced his plans to ban Muslims from entering America, Arianna Huffington changed her publication’s stance on Trump coverage. Instead of treating him as a sideshow, the full might of the politics team would be devoted to unbiased coverage of the Republican frontrunner. The truth won’t set the GOP free, though. (Huffington Post)

For all the fear-mongering that Trump does when it comes to Muslims, he sure likes to do business with them. (Washington Post)

Also convenient omitted from stories following the San Bernardino shooting is that Saudi Arabia has once again managed to not be mentioned in the narrative about terrorism. (CBC News)

How do the police in Paris want to prevent future attacks? By banning Tor and free wi-fi. (Vice) They sure didn’t need to use that before the shooting to get rental cars, cellphones and lodging. (WSJ)

Following up on last week’s shooting, the NYT says that America isn’t even trying to deal with the gun problem. (New York Times)

How much nothing is America doing on guns? They won’t even ban people on the terror watch list from buying guns. (CBS News)

Can the NHL be fixed by giving the bottom positions of the draft equal chances of scoring the #1 pick? Beats Edmonton being in with a chance at their fifth #1 pick in six years. (Pension Plan Puppets)

If you want to hear Stone Cold tell the story of how he opened up a can of whoop ass on Donald Trump, give me a “hell yeah!” (BuzzFeed)