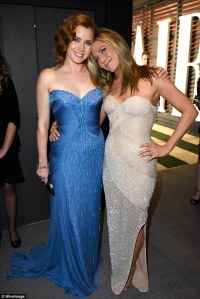 Just when you though that Brian Williams was the only member in the media in the middle of a scandal, I happened across a bunch of stories about news media scandals. Welcome my friends to the show that never ends. And there’s a whole bunch of legitimately interesting stories if that’s more your speed.

Anyway, it’s time for us to do the links. Because the Oscars were this weekend, let’s kickoff with something special. Here’s Amy Adams and Jennifer Aniston.

The right often complains about the war on Christmas or the war on religion but they ignore their war on science. For some reason, science is under attack from people who should know better. (National Geographic)

Naturally, Bill O’Reilly went to town on Brian Williams for his lying scandal. Little did he know that he was about to get caught up in a scandal of his own. (Mother Jones)

The Toronto Star is usually pretty good at investigative reporting but they absolutely chunked the hell out of an anti-HPV vaccine story and had to withdraw it as a result. (Toronto Star)

Speaking of press scandals, there’s a new plan to deal with behaviour in the House of Commons press gallery. Who knew that such a thing was needed? (Canadaland)

The candidates for Mars One’s one-way trip to Mars project has come down to the final 100. Does anyone still think this is a good idea? (The Guardian)

After warning us that Artificial Intelligence will kill us all, Stephen Hawking says human aggression will kill us all. Long story short: We’re all gonna die. (Live Science)

Who wants to run for President? All you have to do is follow four easy steps. (Washington Post)

The Aaron Hernandez trial is ongoing right now. His former team just won the Super Bowl with this as an off-season distraction among many off-field legal distractions throughout the NFL season. How is this not a story? (The Triangle)

Parks and Recreation ended last night as NBC half-heartedly burned off the final season. The end was unceremonious which is a shame for such a fantastic show. (Vox)

It’s a little known fact that I love checking up on blind gossip every now and then. That’s where the really juicy stuff gets not-really-revealed. One of the regular stories is about celebrities having sex for money. You might be surprised at some of the names that have been not-really-attached to those stories but there are some big names and popular young starlets allegedly having sex for money. That brings me to this blind item that talks about how big this story actually is and how common it apparently is. (Crazy Days and Nights)

I shouldn’t find this clip as funny as I do but here’s The Bushwackers on Family Matters with The Gangstas / New Jack’s theme playing for Urkle’s team. E-C-DUB!

And since I plugged OSW Review in the last linkdump, here’s a shoutout to the New Generation Project Podcast that looks at WWE’s New Generation era that I grew up watching as I came in late in the Hulkamania era. Their closing song from Episode #31: The 1996 Slammy Awards was absolutely epic.