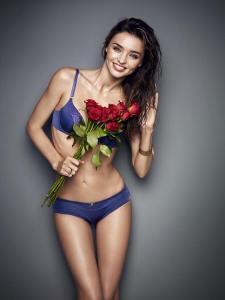 Orwell once wrote, “All animals are equal but some animals are more equal than others.” The frightening thing is how prophetic Orwell’s writing is today. I was actually just saying that Orwell’s 1984 is more relevant today than it was when it was published. The man was good and his books are just getting better with age.

And I realized something while putting this post together. I was supposed to do a Valentine’s themed picture to start the links. Let’s ignore that I forgot and just pretend I was on time with this photo of Miranda Kerr.

The fall and rise of American inequality. (NPR)

And your leading House Republicans aren’t rushing to change things. Paul Ryan thinks that the poor need to comply with the tax code more strongly. Of course. They’re the ones who can afford tax loophole finding accountants. (Washington Post)

Meanwhile, in Canada, the Quebec Education Minister says that strip searches of high schoolers is allowed if they’re “respectful.” If that isn’t among the most ridiculous things you ever heard, I don’t know what is. (Montreal Gazette)

The worst thing that has happened on the internet is the rise of anonymity and the effect it has on people. (New York Times)

Over NBA All-Star Weekend, Kobe Bryant did a rather lengthy interview that touched on, among other things, hater and Colorado. (GQ)

Is depth really that important in the NHL? Here’s a look at each team’s line-by-line 5v5 goals per 60 minutes. (Pensburgh)

Good news! John Oliver’s Last Week Tonight has been reviewed for two more seasons through 2017. I bet HBO was shitting themselves thinking that Comedy Central would back a Brinks truck up to Oliver’s house. (Zap2It)

For one night only, SNL was culturally relevant again. So let’s look back at the last time it was relevant: The night Ashley Simpson was caught lip-syncing on SNL. (UPROXX)

Speaking of John Oliver, here’s his take on the SI Swimsuit Issue.

There’s a time and place to tell someone not to text your girl. On live national television probably isn’t the best time.