It’s been since October that we’ve done a news update on the IndyCar front. Since Simon Pagenaud jumped to Penske and James Hinchcliffe signed with Schmidt Petersen, there hasn’t been a lot of news. However, over the last week, there’s been a flurry of signings and announcements that has made a big impact on the IndyCar scene for 2015.

Let’s start with the big news of the IndyCar offseason.

The seventeen race 2015 IndyCar Series season has been cut short by one race. The Brasilia 300 from scheduled to run on March 8th at the Autodromo Nelson Piquet has been cancelled with just over a month’s notice by the Brazilian government through the federal district’s development agency which was acting as race promoter. 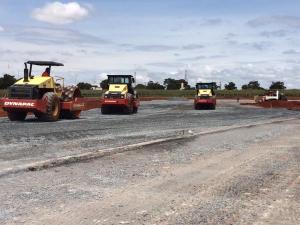 Terracap, the aforementioned government agency and race promoter, pulled out of the race and cut funding for the reconstruction of the track. Despite the race’s cancellation, the sanctioning fees were already paid to IndyCar so they won’t be financially hurt by the deal. Whether Moto GP, who also are believed to have had a race at the circuit cancelled, also have their money is unknown.

IndyCar officials spent a few days attempting to find a replacement event but finding a new venue on less than five weeks’ notice was never going to happen so the race will be 16 races long starting in St. Petersburg at the end of March.

In the grand scheme of things, we shouldn’t be surprised that the Brazilian race was cancelled. The Brazilian government is already stretched thin with spending on last year’s World Cup and next year’s Olympics requiring billions of dollars of money to build new facilities and upgrade infrastructure while crippling the Brazilian economy with debt to finance all of this. A little IndyCar race that the government is funding is probably just small potatoes in the cuts the government has made is going to make.

The other big IndyCar news is the new race director. After 17 years under Brian Barnhart and three under Beaux Barfield before the latter’s move back to sports cars with the United Sports Car Series, the new hot seat in race control will be manned by… *drum roll* BRIAN BARNHART! 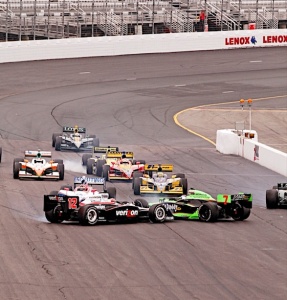 Apparently IndyCar fans should be okay with this move, though. You see, Barnhart might be the race director and have a track record of dangerously bad decision-making but he’s not the only race steward so the Indy Star’s Curt Cavin says Brian’s good now. Last year, IndyCar boss Derrick Walker introduced a three-man race steward panel which Barnhart regularly served on and no one complained so life is grand.

The problem is that the race director’s role goes beyond judging on-track rules infractions and the punishments for said infractions. He’s the guy that calls for cautions. He’s the one that gives the okay for restarts. He runs the show. He’s demonstrated in the past that he can’t handle running the whole show on race day. Sure, Will Power won’t give him the double bird for a bad penalty call but he may still give Barnhart that for everything else he does.

On the silly season front, one piece of news reported in the last update has become official. Jack Hawksworth has signed with AJ Foyt Racing to drive the team’s second car, the #41. That brings the full-time car count with signed drivers to 18. With the likes of Ganassi, Andretti and Schmidt Peterson all looking to fill one more seat and Dale Coyne still to sign two drivers, the 2015 car count will should be 23. That doesn’t include the possibility of extra seats at KV, Rahal or Andretti. 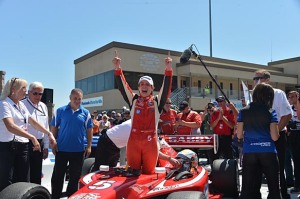 Elsewhere, a couple of seats have been filled apart from that one at Foyt. Gabby Chaves will go from 2014 Indy Lights champion to 2015 IndyCar rookie as he signed with Bryan Herta Autosport to replace Hawksworth. Luca Filippi was supposed to be the odd on favourite for the #98 car but ended up signing with CFH Racing to run road courses in the #20 for Ed Carpenter.

It seems increasingly likely that Chaves and Filippi won’t be the only rookies on the grid in 2015. The rumour mill won’t stop talking about the possibility of Sage Karam getting the call to join Ganassi in the #8 car. The Ganassi prospect/wunderkind has long been expected to get a seat with the team sooner rather than later.

Elsewhere a few interesting names keep coming up for other race seats. With Mikhail Aleshin heading to LMP2 thanks to Russian economic sanctions, there are two front-runners for the SPM #7. Conor Daly has been fighting hard for a seat in IndyCar and looks to be targeting SPM the hardest. A run in KV’s second car is possible but less likely.

The other person pushing hard for an IndyCar ride is Simona de Silvestro. After her deal at Sauber F1 fell apart over money (like a couple of other deals there), she started looking back Stateside. It looks like she’s coming full force at SPM’s #7 to run alongside James Hinchcliffe.

Alexander Rossi is another F1 refugee that is looking to IndyCar now that Marussia appears to be dead. Dale Coyne may give him a seat depending where Justin Wilson goes. Wilson is rumoured to be either returning to Coyne or going to KV. Carlos Huertas’ fate may be tied to what happens with Wilson and Rossi. 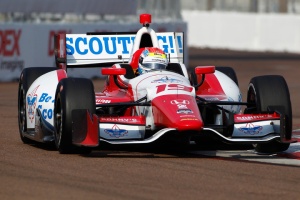 Over at Andretti, it looks like the fourth car could be split between Jean-Eric Vergne and Zach Veach. Neither driver is believed to have a full season’s budget so it seems as though a seat split between the pair is being mulled over. That fourth seat could also go to Wilson with JEV and Veach running a 5th car. That one is a late developing rumour so there might be some fire to this smoke.

And I’ve gone all this way without mentioning Sebastian Saavedra. He and his AFS backing haven’t committed to a team yet nor have they been rumoured to be attached to a team. If Saavedra or AFS still has money this year, they will be players as the music stops playing and people scramble for seats.

Meanwhile, Indy Lights looks to be coming along for its 2015 season. The introduction of the new Dallara IL-15 chassis has increased the cost over the prior season but it hasn’t scared teams away.

After getting only eight full-time entries in the 2014 campaign, Indy Lights seems on pace to get 16 or more full-time entries this season. Series boss Dan Andersen thinks that the series can go from 16 entries up to 24 entries for the 2016 season. 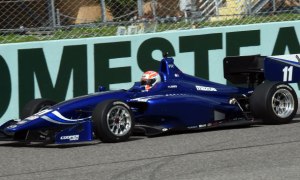 The most interesting new names in the series are Carlin Motorsport and Max Chilton. Carlin is a mainstay in the Formula One ladder with teams in GP2, GP3, Formula Renault 3.5, F3 and now Indy Lights. While Carlin has traditionally focused on feeder series, one would have to think that they have an eye to joining IndyCar proper as F1 race seats for their drivers to graduate to are getting fewer and farther between. An IndyCar program would provide more opportunities for world-class competition for their drivers.

As for Chilton, rather than jumping from Formula One to IndyCar, he’s going to get a year of Lights under his belt to prepare for the jump to the big cars. Considering that he’s never run on an oval before, that’s probably not a bad idea. Also, considering his less than stellar F1 reputation, a little back to basics probably wouldn’t hurt either.

And that should be the last news update before the start of the 2015 IndyCar season. There are still a few seats to be filled and if they’re filled this month, I’ll be back with another update.

The first race of the season will see the stars of IndyCar take to the streets of St. Peterburg. The race at St. Pete has been dominated by Penske over its IndyCar history. Helio Castroneves has three wins and Will Power has two win at the track which are part of Penske’s six wins from ten races on the city’s streets. Can the streak continue or will the #1 curse prevent Will Power from returning to the top step of the podium?

One thought on “IndyCar Winter News Update: Gearing Up For 2015”