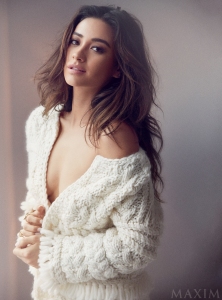 I know on Sunday that I said that the hardest part of doing a linkdump is coming up with a title but doing these intros isn’t much better. That’s especially true when you have to think of a bunch of links that really have nothing to do with each other. So I just killed a little bit of time by rambling on about that.

So that means we can get to the links. Here’s Canadian actress Shay Mitchell.

Justin Trudeau is ramping up for his first campaign as Liberal leader. Here’s a look at the economic advisory team he’s assembled that will likely prove the key to any success. (MacLean’s)

Fox News is being taken to task. The City of Paris is planning to sue Fox News over statements it made about the city. (CNN)

Printed pornography is dying. The likes of Playboy are being replaced by magazines that push art over just straight titillation. (New York Times)

Tradition is a powerful force in Major League Baseball. One tradition that hasn’t withstood the test of time is pitchers moving quickly on the mound. (New York Times)

Life as an NHL dentist is shockingly not as glamorous as you would expect it to be. (Bleacher Report)

Gordie Howe is on the road to recovery after being on his death bed. He has an illegal stem cell treatment he had to go to Mexico for to thank. (Windsor Star)

The lasting image of the NFC Championship Game wasn’t Seattle’s overtime win. It was the guy without pants drinking from a pink waterbottle. (SB Nation)

Thomas Keller is opening a pop-up restaurant and I never pass up a chance to post a Keller link. (Food and Wine)

OSW Review did a two-and-a-half hour Q&A about the show and wrestling. Why, yes, I do rather enjoy this show.