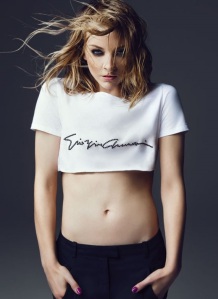 So the big blockbuster hitting the screens this weekend is the first part of the final installment of The Hunger Games franchise. I am certain people will be flocking to the theatres to catch what is considered to be the best flick in the franchise so far. Oddly enough, it feels like half of a finished product. Anyway, as if Jennifer Lawrence and co. aren’t enough of a draw for you to check it out anyway, Natalie Dormer finally shows up in the franchise as Cressida. Let’s start off the ELO with her.

After the jump, third time is hopefully the charm for Global Frequency, more Planet of the Apes films to come, aca-awesome trailer for Pitch Perfect 2, another Breading Bad/Frozen mashup and shake it off the violin cover of the Taylor Swift hit,

I know the CW tried and failed (twice) to bring the comic book series Global Frequency to the television screens but it looks like FOX is willing to take a crack at it. (Deadline)

Christopher Nolan discusses about the twist in Interstellar but remains mum on the ending of the film. (The Daily Beast)

Ridley Scott promises a different kind of alien in Prometheus 2. We are all cautiously optimistic. (Scified)

Andy Serkis suggests the current slate of Planet of the Apes prequels could span 4 to 5 films. (MTV)

Check out The Hobbit’s “The Last Goodbye” featuring Billy Boyd. It is hauntingly beautiful. (Entertainment Weekly)

Looks like there is more of that aca-awesomeness to come in the new trailer for Pitch Perfect 2!

The folks at HISHE have done it again (and with director James Gunn’s approval too). Here is how Guardians of the Galaxy should have ended.

Challenge of the day. Trying to get Jimmy Fallon to say Booty.

Music recommendation of the week. How about a violin cover of Taylor Swift’s Shake It Off?