Nico Rosberg might have started the race on pole but he wasn’t able to finish on the point. Despite a late charge from the German, it was Lewis Hamilton who won his 10th race of the 2014 season and became the winningest British driver in Formula One history in only his 7th season in the top flight of international motorsport.

However, the race was really only a B-plot to this weekend’s story. The three weeks leading up to the United States Grand Prix saw two of the 11 teams on the grid go into administration and fail to turn up for this weekend’s race. In fact, neither team is expected to return in 2014 and may not be back in 2015. The weekend’s real story is the state of the sport and the financial viability for the whole grid and not the mainstays at the sharp end.

The race started with the Grand Prix looking like Rosberg would run away with it from pole. He got away cleanly off the start. After a safety car (a proper one, not the virtual safety car that had been tested in the first two Free Practice sessions of the weekend) that came out on Lap 1, he once again sped off into the distance.

Hamilton’s problem wasn’t his pace but his tyres. In chasing a fast qualifying time, Hamilton had flat spotted his tyres which compromised his running in the first stint of the race. So despite getting a crack at Nico at the start and restart, Lewis couldn’t make anything happen early.

When Rosberg made his first stop on Lap 16 with Hamilton one lap later, it looked as though we were settling in for a quiet afternoon’s drive. However, on an unblemished set of medium prime tyres, Hamilton once again found the pace. He quickly cut down Rosberg’s lead and dove down the inside at the end of the backstraight to take the lead.

From there, he was able to stretch his lead for the rest of the stint. In the final stint, it looked like the roles would again be reversed with Rosberg finding some speed on the final set of primes. However, the pace didn’t last until the end of the race and Hamilton was able to win by a comfortable 4.5 second margin. 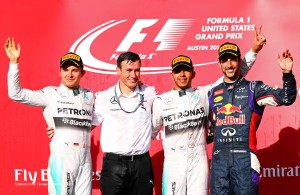 Statistically, a driver who wins four races in a row during a season has never failed to win the World Drivers’ Championship. This win was Hamilton’s 5th in a row and he’s done four-straight twice. Rosberg’s 2nd gives Mercedes its 10th one-two of the year which ties McLaren’s 1988 record but it also leaves him 24 points adrift of his teammate. Daniel Ricciardo completed the top three for his 8th podium this year. Interestingly, Danny Boy has yet to finish 2nd in a race.

Felipe Massa led teammate Valtteri Bottas home as the pair finished 4th and 5th, respectively. Fernando Alonso continues to reliably score points for Ferrari with a 6th yesterday. Sebastian Vettel started in the pit lane and made multiple pit stops, including one late one that allowed him to make a late run to 7th. Kevin Magnussen was involved in scraps all day but acquitted himself well to finish 8th. Pastor Maldonado and Jean-Eric Vergne crossed the line in 9th and 10th, respectively, before Maldonado’s five-second speeding penalty swapped the order. That was again reversed when Vergne was given his own five-second penalty for a sideswipe pass of Romain Grosjean which effectively restored the order as they crossed the line.

The big story of the week was the back end of the grid. After going into administration (the British quasi-equivalency to bankruptcy protection in North America) before the Russian Grand Prix, the Caterham team was not present at the United States Grand Prix. Also not present was Marussia who confirmed their absence from the race last week as they too would be going into administration.

The concerns over the financial feasibility in Formula One have been brewing for some years now. The disappearance of minnows HRT was not a surprise. The apparent closure of Caterham isn’t a great surprise but Marussia was a bit of a surprise since they are in line for an estimated $64 million in prize money.

The two teams are taking advantage a seldom enforced rule in the Concorde Agreement that allows a team to miss up to three races per season without penalty. In this instance, that would allow both teams to miss the remainder of the season before returning in the 2015 season, assuming they return.

There are two main reasons for the impending failure of the two smallest teams in Formula One, though they are both interconnected. The high costs of running a Formula One team and the low prize money at the tail end of the grid are killing the smaller, slower teams. What’s worse is that the teams like Caterham, Marussia and HRT (also USF1 before they closed) came into F1 under the promise that F1 would be cost capped at anywhere from $60 to $100 million. Costs of F1 have come down where most teams are believed to be spending less than $300 million but it’s still more than what those teams came into F1 expecting to spend.

The following breakdown of costs for a midpack F1 team was taken from a letter to FIA boss Jean Todt and leaked by Autosport.

So that estimated $64 million of prize money is enough for Marussia to fund half of their 2015 season. When you only have to look for $60 million in prize money instead of $110 million, it makes life a lot easier. Granted, it’s also reported that the minnows require only about $80 million in money to operate for a season. 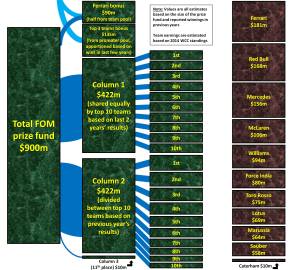 This image from Reddit’s /r/Formula1 section shows the estimated breakdown of prize pools in Formula One shows how $1.1 billion is distributed to the teams. Currently, only the top ten teams get any money with the top three teams (and Ferrari) getting money from a promoters’ fund separate of the FOM prize fund.

Right now, Caterham is only in line for $10 million which is over $40 million behind the 10th place team. They’re not the only one feeling the pinch as Marussia is under administration and Lotus and Sauber are both using drivers’ personal backing as criteria for hiring drivers.

In fact, ahead of this weekend’s race, there was talk that the mid-pack privateers were considering boycotting the race out of protest of unsustainable costs and the prize distribution formula that makes the sport unsustainable for backmarker entrants.

The teams expected to protest were Lotus, Force India and Sauber. That obviously didn’t happen but there was some concern after a contentious Friday press conference and meetings with Bernie over the course of the weekend.

Bernie Ecclestone weighed in on the subject and actually agreed that changes needed to be made but also said that all teams would have to agree to changes in prize pool distribution. Since the big teams reportedly don’t want the smaller teams to fail (because one of them might be the new back of the pack team), they very well might agree to rules changes.

So what’s the best way of getting to some level of sustainability? Well, distributing that Column 2 funding to all teams instead of the top ten will help. That would give $38 million to each team which would get a backmarker to half-funding. It wouldn’t be perfect but it would be a start. From there, it’s all about who is willing to sacrifice some money to keep the minnows afloat. The likes of Ferrari, Red Bull and Mercedes (the recent top three teams, one of which gets a $45 million cut of the FOM prize pool off the hop), will have to be the ones to sacrifice some of the top end prize money to put it into Column 2 prize money. Will that happen? If they’re serious about saving small teams, they’ll have to.

One effect of the high costs and small prize pools is the prevalence of pay drivers. We all know about Pastor Maldonado retaining his employment with Lotus and previously Williams thanks to Venezuelan government sponsorship backing worth over $46 million per year. He’s not the only one whose backing gives him employment.

Sauber announced this weekend that Marcus Ericsson, the current Caterham driver, will be running one of the team’s two seats in 2015. He is said to bring $18 million in backing from his own personal sponsors that will buy him that Sauber ride. Adrian Sutil is staking his claim to the other Sauber seat thanks to his contract (and his personal sponsors).

Ericsson is the third option for the second Sauber seat. Sergey Sirotkin came to Sauber in 2013 with Russian backing to keep the team afloat. He was in line for a 2014 seat but that never materialized nor did a 2015 seat. Simona de Silvestro had been brought into the team with an eye on racing in 2015 but it appears that she didn’t have the backing to make that a reality as her contract was suspended at the beginning of October.

It’s sad what has happened to Sauber but things have certainly changed for the little privateer team. They went from having Red Bull and Petronas backing to being the BMW factory team and to scraping by to make ends meet without much in the way of sponsorship or backing. It’s amazing how much Formula One can change when you can go from a championship contender one year to nearly out of the sport the next and just hanging on thereafter.

The next round of the 2014 Formula One World Championship is next week. It’s a short trip south of the equator to Sao Paulo, Brazil. It’s not for the annual Formula One soccer match (that’s in Monaco). It’s time for a run around Interlagos for the Brazilian Grand Prix.

Interestingly, this one could play into the hands of Rosberg. For each of the last three seasons, Rosberg has finished ahead of Hamilton in the Brazilian Grand Prix, though Lewis only finished one of those races. In races Brazilian GPs that they’ve both finished, their results are level at two finishes ahead each. Of course, when you talk about Lewis Hamilton and Brazil, everyone goes back to the 2008 race where he won the Championship with 5th place finish passing Timo Glock off the final turn as he struggled for grip on a wet track with his slick tyres.

The biggest difference in this race is Rosberg’s apparent struggles in adapting to the new quiet radio rules. Since those rules were introduced in Singapore, Nico hasn’t won a race and he had a reputation for keeping a pretty steady dialogue with the pit wall. Of all the things that could affect the World Drivers’ Championship, I don’t think that the FIA thought that the radio rule would have been the one that tipped the scales in Hamilton’s favour.