One of the advantages of being behind on playing an episodic game like The Walking Dead: Season Two is that you can play multiple episodes in quick succession. I didn’t get into the first season until a random Steam Sale so I was able to go through the first three episodes at the same time. There’s something to be said about being able to keep the story rolling by binging episodes. It works for TV so why wouldn’t it for video games?

Once again, my habit of going contrary to the consensus critical opinion continues in this review. While critics rated it as the worst episode of the season, I have it as the second-best. So what did I see that no one else did?

Spoiler Alert: “Spoiler-Free” refers to the episode being reviewed. I’m assuming that you’ve played the preceding Telltale TWD games when writing this review. If you haven’t played through the previous episodes, you may want to stop reading now.

Since I seem to be making a habit of it with these The Walking Dead reviews, this episode also had a central theme that bound all the story threads together again.

In Amid The Ruins, the story is built around grasping onto feelings of humanity and hope. Over the last eight episodes and certainly the last two for our current group of survivors, they’ve been beaten down to the point where the group is threatening to come apart at the seams. 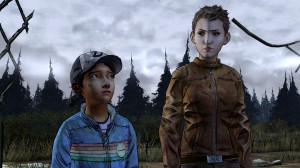 Despite the fact that she’s only 11-years-old, her de facto position as the group’s leader, decision maker, doer and moral compass leaves her at the brunt of everyone’s anger. Unlike some of the episodes where there are little fights between a couple of the characters or one character is doing the antagonizing, the whole group is ready to turn on each other and Clem isn’t exempt just because she’s a little girl. In something approaching a complete breakdown, one character essentially angrily shouts at Clem saying that just because she’s a little girl doesn’t mean that the death of members of the group haven’t been on her hands.

But despite the tensions of the group being at the forefront of the episode, everyone was looking for the bright spots. Rebecca still has that baby on the way and everyone is focused on her and its well-being. Members of the group come across a family of raccoons when looking for supplies and get thoroughly charmed. And the two most obvious characters find a moment of alone time to do the clichéd post-apocalypse thing. If you played through Episode Three, that’s practically a spoiler.

Even though this episode was a bit less focused in one location as Episode Three was, they still had time to give some of the secondary characters a lot of time with Clementine to flesh them out. You spend time with each of Jane, Mike and Bonnie from the previous episode. While they didn’t get much more than a one-note performance in Episode Three, they all seemed very human in how they dealt with the horrors inflicted on the group and in how they looked for whatever bright spot they can still find in the world.

After a dark episode in In Harm’s Way and an equally depressing start to Amid The Ruins, a little bit of levity went a long way to breaking the overwhelming tension by the end of the game. Of course, this being The Walking Dead, the game’s final act pulled the rug right out from under me and left me with a cliffhanger where anything could happen. After last season’s Episode Four cliffhanger and the number of deaths that this game throws at you, I’m legitimately going into the next episode blind and I absolutely love it.

What else made the roller coaster of emotions in the episode’s back half is that every decision that I made felt like the wrong one. Unlike every other episode where most dialogue choices have clear implications as to who you’re siding with and which is the (to use a Mass Effect term) paragon and which is the renegade option, few of the dialogue options and decisions had obvious implications as to what the outcome would be.

As a result of that, none of these will feel right or good. I’m fairly certain that you’re not supposed to feel particularly good about the decisions that you’re forced to make or were forced to make in the last episode. Every possible feel good moment is quickly followed by a sequence designed to make you feel terrible about what you did.

This episode opens up to the possibility to Clementine being a leader of this group despite the fact that she’s the youngest member of the group. Everyone sees her as the one they should turn to and one that is taking this responsibility upon herself as she’s the only one capable and willing to do so.

While most characters like Kenny and Luke imply that Clem is the most important member of the group, Jane comes out and tells Clem that she’s the one that’s keeping the group alive even though she’s not even a teenager. This is the second-straight episode where we see another character come close to breaking the wall in talking about Clem’s unusual maturity and leadership skills in the middle of the end of days. 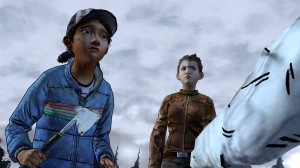 It’s a bit more obvious that the wheels are turning in Clem’s head when she hears that from someone she trusts. She realizes that she’s the one holding the group together but she also realizes that she owes the group for taking her in and protecting her. However, you can see her (and know that you’re) starting to realize that Jane is right and that she could make in on her own or, at least, without that big of a group to travel with.

In my review of In Harm’s Way, I noted a lack of interactivity in the episode. In this episode, actual gameplay makes a very welcome appearance. It’s not just meaningless decisions that guide you from event to event. There is zombie combat. Actions and decisions that you make carry a bit of weight because of both immediate consequences, consequences later in this episode and the very good possibility of an effect in Episode Five.

While I justified the lack of interactivity in Episode Three as justifiable because no one is buying TWD for the gameplay, that doesn’t mean that I want to watch a 90-minute movie masquerading as a video game. The combat, meaningful decisions and the tension and urgency behind you taking those actions gives the gameplay and, in turn, the story of this episode a bit more impact than the last episode.

After the last few episodes, it’s actually noteworthy when I ran into various glitches in the game. The dialogue didn’t always sync up with the subtitles and it alternated between being too long and too short. There were also a few instances where characters didn’t move their lips when talking, including one right at the start of the episode in the recap of previous episodes.

Apart from that, I didn’t notice any issues with framerate or graphics in this episode. However, I did play on my desktop rather than my laptop because it’s degenerated to the point where it’s barely fit for me to use it for blogging.

While Episode Four doesn’t really carry the same emotional impact that the introduction of Carver and return of Kenny did in Episode Two, this was still an improvement over In Harm’s Way. The ability to blend gameplay and story is what makes this game so great and memorable. That certainly was missing last time and a welcome return in Amid The Ruins.

And now we wait for the final episode that’s due for release in September. With the cliffhanger left so intentionally open-ended that the episode could open in a number of different ways and foreshadowing of Clementine’s future in the last two episodes, it’ll be interesting to see where the story goes from here. You usually have an idea of some of the plot points coming up in the next episode but apart from someone getting out of this cliffhanger alive, who know what’s in store.

The Walking Dead: Season Two – Episode Four: Amid The Ruins was played on Windows PC but is also available for OS X, PlayStation 3, Xbox 360, PlayStation Vita and iOS. The review code for this game was provided by Telltale Games. Your impressions of the game may change depending on platform played on, PC specs and a certain point of view.