While it’s certainly and advantage to run week in and week out on the IndyCar circuit, that doesn’t mean you have to run every race to succeed. Since the team owner became a part-time driver, the #20 Ed Carpenter Racing car became a threat with road course specialist Mike Conway handling the races with right turns and Ed driving only on the ovals. The results have seen Conway win at Long Beach and Carpenter start the Indy 500 on pole.

So it should come as much of a surprise that the so far winless driver of the #20 car was able to correct that quite quickly. In only his second start of 2014, Ed Carpenter put in a stellar race to pick up his first win of 2014.

Despite not having much luck on the ovals and not particularly liking them either, it was Will Power who scored the pole for the Texas 600. And despite the fact that Paul Tracy said that Power always seems nervous before oval races, he led all but five of the first 100 laps. Those laps out of the lead were just because his teammate, Juan Montoya, was on a different pit strategy. 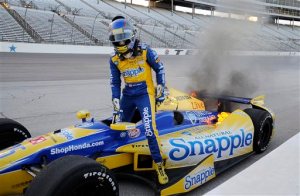 There were two key stories during the race. The first was the failure of Honda engines in the heat. There were only three engine failures in the race and all were Hondas. The first was Marco Andretti’s. He started 17th and quickly climbed into the top ten after only two laps. On the third, his engine caught fire and his race was over. Ryan Hunter-Reay made it just past halfway before his engine expired. And Takuma Sato caught fire with less than ten laps to go.

The other story was the tires. While previous attempts to spice up the racing by making the cars run in a low downforce configuration has resulted in some great racing, this weekend’s race didn’t turn on out as well as usual. That’s because the tires started falling off quite quickly. While there was a bit of passing on fresh rubber and as cars were on different parts of the pit cycle.

The only two cars with any sort of sustained pace over the course of a run were Power and oval specialist Ed Carpenter. They were upwards of 3 MPH faster than the rest of the field by the end of a stint. As a result, the race was going to be a shootout between the two. That was until Power overcooked it on entry to pit road for his final stop and got a drive-through penalty for speeding that ended his challenge for the win.

The win was the third of Carpenter’s career and his first win of the season. Because Carpenter is only running oval races, this makes him one for two this season and gets his team to 7th in Entrants’ Points. Drivers’ Championship points leader Will Power finished 2nd after taking tires during the final caution and charging from 6th to half-a-second from the point at the end. Juan Montoya scored his first podium with Penske and in his IndyCar return by finishing 3rd.

Simon Pagenaud also stopped for tires during the final caution but only managed to climb one spot on the restart to 4th. Scott Dixon scored his second-straight top-five in 5th. Tony Kanaan rounded out the lead lap cars in 6th. Mikhail  Aleshin was the top rookie and top car one lap down in 7th. Helio Castroneves finished 8th. Ryan Briscoe hasn’t scored a top five yet this year but 9th isn’t shabby. And Charlie Kimball rounded out the top ten making it all four Ganassi cars in the top ten.

Shortly before this race, IndyCar made a decision that shouldn’t have surprised long-time observers of the sport but won’t make any new fans.

While fans loved the excitement of double-file restarts, some drivers, car owners and traditionalists didn’t like them, calling double-file restarts a gimmick and dangerous. Considering how far behind NASCAR the series is in the public consciousness, maybe IndyCar needed that gimmick to keep interest in the races. And the danger comes from the fact that drivers don’t trust other drivers rather than any inherent danger from the restarts.

A little tidbit from Derek Daly’s Twitter account: He ran into Jacques Villeneuve at the Canadian Grand Prix in Montreal this weekend and says that the Indy 500 champion would be interested in returning to the series as a full-time driver.

Prior to the introduction of the DW12 chassis, Villeneuve had questioned the series’ commitment to safety and said he wouldn’t come back. Citing the safety of the new car and the vastly improved quality of competition since the merger, he came back for this year’s Indy 500. It looks like his first taste of IndyCar competition in 19 years has enough to make him want to come back for more than just one race.

While I doubt that there are many teams that would take a chance on a 43-year-old driver who’s been out of top-level motorsport for nine years, it goes to show the respect that IndyCar is getting in motorsport. While the fans might not be flocking to IndyCar, the fact that top (or former top) drivers are interested in driving in the series shows that it’s not just an afterthought for pay drivers as it was during the split.

Shockingly, the IndyCar Series gets a three-week break before the next round of the championship. After going for the last five-straight weeks, the teams get a brief summer vacation before going for six rounds in four weeks. The first two of those six races comes in a doubleheader weekend as the IndyCar runs under the hot Texas sun for the Grand Prix of Houston doubleheader weekend.

Last year’s Houston races saw mechanical failures cost Helio Castroneves a shot at the title and gave it to Scott Dixon. Given how much trouble the Honda cars were having during a warm Texas night, I wouldn’t be surprised to see them struggling in the heat of the day in Houston.

I’d expect Will Power to run well here but you always expect him to run well on road courses. Scott Dixon basically claimed the championship in Houston last season so he can turn around his title defense with a strong performance there this year. Sebastian Bourdais has two Champ Car wins at Houston and is driving for the same team that got Simona de Silvestro to 2nd here last year which makes him my darkhorse for the next race.