When previewing the Canadian Grand Prix, I often referred to it as one of the most exciting races on the Formula One calendar. Once again, the Circuit Gilles Villeneuve played host to a race so exciting and so dramatic that you couldn’t pull yourself away because you would certainly miss something. In fact, the action was so continuous and intense that the cameramen and FOM race feed missed a whole pile of it as it was happening because they were too interested in crowd reaction shots.

While Mercedes looked like they could be the first team to sweep a Formula One season, the racing gods decided that this wasn’t their year. Instead, ERS failures on the Mercedes cars resulted in a dramatic final stint in which the field caught but couldn’t pass Nico Rosberg. Well, the field bar Daniel Ricciardo who pulled off an epic pass with two laps to go to win his first Formula One Grand Prix.

For the second straight race, it was Nico Rosberg who led from pole ahead of Lewis Hamilton. At least in Canada, Nico scored his pole fair and square rather than questionably as was the case last week. 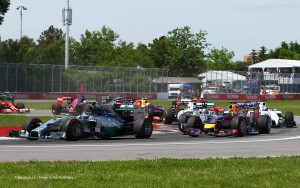 Hamilton got a great start but and got alongside his teammate into Turn 1. Rosberg was having none of it and ran Lewis wide which allowed Sebastian Vettel into 2nd through Turn 2. Lewis didn’t get a chance to answer as the Safety Car was called upon on Lap 1. In Turns 3 and 4, Max Chilton lost the back-end of his car and collected teammate Jules Bianchi which sent the latter into the wall and both cars out of the race.

After the restart, Hamilton waited two laps for DRS activation to make his way by Vettel into second. He waited until his pit stop to challenge Rosberg. Both on fresh prime tyres, it was Hamilton who was faster on-track. Off-track, it was Rosberg who had the advantage which he utilized when he cut the final chicane to gain a time advantage over Lewis. He was reprimanded by the stewards but because he only gained time rather than positions, he wasn’t penalized.

After their second stops, it was Hamilton who was able to leapfrog Hamilton. He then very quickly gave up that lead when he locked up under breaking for the hairpin. And again at the final chicane. And at Turn 1… And Turn 5. Hamilton had a major braking problem that was believed to be related to the power loss the team suffered. A look at the telemetry as part of the on-board footage showed that Nico Rosberg had stopped using ERS so it was likely and ERS failure that caused the power loss and the KERS recovery unit which resulted in Hamilton’s brake failure.

Thanks to the DRS zone into Turn 1, Ricciardo was able to dive past Perez and immediately set sail for Rosberg. Unlike Perez, Ricciardo wasn’t trying to nurse his car home. In two laps, he was on Rosberg’s tail and was able to get by using speed, slipstream and probably a bit of unnecessary DRS.

Rosberg never had to defend his position from anyone else. On the final lap, Massa tried to follow Vettel by Perez but the pair collided instead. The stewards ruled that Perez made a move to the left right before contact with Massa and gave him a five-place grid penalty. Both cars slid by Vettel on either side and allowed him to slide into 3rd. Both men got checked out at the medical facility but were okay. The safety car was deployed to allow medical cars to be scrambled to the scene which cemented the win for Ricciardo.

After 57 Grand Prix starts and 7 with RBR, this was Ricciardo’s first win and he couldn’t have done it in better fashion. It was also the first win for a team other than Mercedes this season. Rosberg stretched his lead to 22 points which is his biggest margin since the first race of the season. Vettel finished 3rd which was his first podium since Malaysia, the second race of the season.

Jenson Button lucked his way into fourth. Hulkenberg was threatening for a podium earlier in the race using pit strategy but only managed 5th. Granted, that’s his fourth Top 5 of the season. Fernando Alonso finished 6th. Valtteri Bottas started in perfect position to challenge for a podium but pit strategy didn’t work in his favour. Jean-Eric Vergne finished where he started in 8th. Kevin Magnussen was the biggest beneficiary of the last lap crash since he jumped from 11th to 9th. Kimi Raikkonen had a miserable day that included a spin but rounded out the points.

After likely being relegated to their second-straight 11th place finish in the World Constructor’s Championship, reports quickly sprung up indicating that Tony Fernandes was going to sell Caterham. Not just the Formula One team but the whole car manufacturer for £350 million. 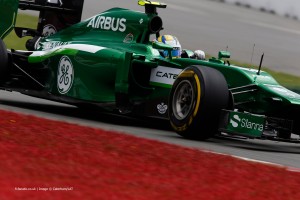 The news probably shouldn’t be surprising since Fernandes said back in January that he would consider pulling out of Formula One if the team’s results didn’t improve. Fernandes entered the team (previously known as Team Lotus and formerly formally known as 1Malaysia) when the FIA was going to institute a budget cap in Formula One. That and other proposed budgetary restrictions have since been abandoned.

However, just days after the initial report, Fernandes issued a statement saying that he was not selling or trying to sell either the car manufacturer or Formula One arm of Caterham. Instead, Fernandes says that he’s trying to get additional investment into Caterham, not trying to sell the whole company off.

I certainly wouldn’t fault Fernandes for trying to get out right now. His Air Asia company is sponsoring two of his personal sporting playthings. Air Asia sponsors Caterham F1 and Queen’s Park Rangers. Having a Formula One team and Premiere League football team are not cheap ventures and you have to wonder at what point it’ll be just a bit too expensive for Fernandes’ blood. He’s going to divest himself of one of those teams soon. It’s just a matter of which is first if you ask me.

Speaking of newer teams, there’s an update on the two remaining open spots on the grid. If you recall, the FIA had previously allowed for the expansion of Formula One to 13 teams and 26 cars back when they expanded the field after the 2009 season.

With the field at 11 teams and 22 cars, the FIA was looking to approve at least one new team this season. Back in April, the FIA approved their second American Formula One team in that expansion with the approval of Haas F1’s entry into the sport. When Haas said that they were delaying their entry into F1 from 2015 to the 2016 season, the FIA picked another team to fill up the grid.

After a few weeks of speculation, Romanian team Forza Rossa Racing (FRR) was formally awarded an entry into Formula One. With the Haas F1 team getting their F1 entry six weeks before FRR and having to delay to 2016, one would have to assume that Forza Rossa would also want to back its entry to 2016.

The new team, backed by a group of Romanian investors, including the Romanian government, is going to be run by former Force India and HRT boss Colin Kolles. It’s also believed that FRR will be running a Renault power plant in its car. Interestingly, FRR’s lead investor is Romania’s biggest Ferrari importer whose dealership is called Forza Rossa.

The next round of the 2014 Formula One World Championship is at a track that is returning to the schedule. After a little renovation, the success of Red Bull Racing, and adding Red Bull as a title sponsor and promoter, the circuit known as the Red Bull Ring (formerly the Osterreichring and the A1 Ring) will play host to the return of the Austrian Grand Prix.

While Red Bull has probably put in the most time on this circuit during promotional events and Ferrari has the Grand Prix experience advantage, I would hazard that Mercedes has the edge for this race. Still, Ferrari isn’t looking too, too much slower and Raikkonen and Alonso have a combined four Grands Prix on the A1 Ring. Whether that will help them or simulator work will allow the rest of the field to keep pace with the Ferraris remains to be seen. I’m going to guess that simulators will be a big help.

One thought on “F1 Canadian Grand Prix: Perfect No More”