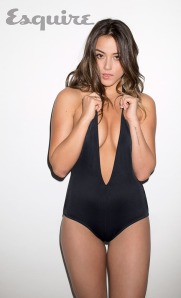 And so marks the first time that a linkdump has been titled a hashtag. I somehow doubt that this will end up being a trend but it’s fitting considering we have two links about the Ontario provincial election and the Toronto mayoral election. That’s all the Ontario politics that most people would care about. Granted, I don’t expect anyone to really worry too much about Ontario’s politics. I think we’re screwed regardless of who ends up in power.

Anyway, it’s time for us to do the Sunday links. For fun, let’s kick it off with Chloe Bennet of Agents of SHIELD fame.

In something that shouldn’t be news to anyone, there are Russians among the pro-separatist militants causing unrest in Ukraine. Still wouldn’t be shocked if the Russian government was involved in this somehow. (New York Times)

Tim Hudak’s Million Jobs Plan sounds all well and good. The only problem is that the math is so completely broken that they may have overestimated jobs created by a factor of eight, didn’t factor in their own 100,000 public sector job eliminations and failed to mention half of their million jobs are expected to be added to the Ontario economy without their intervention required. (MacLean’s)

Did you ever want to know what deluded celebrity insanity looks like? Here’s a look inside Kim Kardashian and Kanye West’s wedding. Holy crap… (Page Six)

Who’s ready for 20 years of construction on the Gardiner Expressway? Thank god I don’t live near Toronto. (The Globe and Mail)

I’m not saying that Cobb County is a dictatorship but anyone who tried to speak in opposition to the county giving the Atlanta Braves $400 million for a new stadium was not allowed to speak. (Deadspin)

Who says the NBA is fixed? LeBron James was on court for 13 minutes in Game Five of his Eastern Conference finals series. He accumulated five fouls in that time span. Nothing fishy about that. (Larry Brown Sports)

Here’s a look at Jon Taffer and behind the scenes of Bar Rescue. (VICE)

Have you ever wondered about how truly sad the state of our society is? Here’s a list of the 100 most obsessed about people on the internet. (Time)

You don’t want to challenge me in rock, paper, scissors any more. This video is going to help me (and you, I suppose) become an RPS god.

And WWE Hall of Famer Jake “The Snake” Roberts turned 59 this week. Here’s one of his many great promos.