Let’s get this out of the way first: Nico Rosberg won the race for Mercedes in an absolutely dominant fashion. However, that wasn’t the real story of the race. The true hero of the Monaco Grand Prix was Jules Bianchi who kept his nose clean through the traffic, crashes and safety cars to finish 9th and score his and Marussia’s first ever points.

Rosberg started from a controversial pole position and held that position for the whole race. There were a few close moments as Nico was told the think about fuel and tyres while teammate Lewis Hamilton did a good job of preserving his car and was able to keep the pressure on Rosberg as the first stint came to an end.

The first stint was bookended by safety car periods. On Lap 1, Sergio Perez was punted into the wall coming out of Mirabeau in between cranes and a safety car was required to retrieve him.

What really changed the race was the safety car at the end of the first stint on Lap 24. Adrian Sutil was successfully moving up through the field until he lost it under breaking for the Nouvelle Chicane and nosed it into the Armco. The resulting safety car shook up the field as everyone dove for the pits. The Mercedes had enough of a lead that they maintained position despite stacking pitstops. There were a number of near collisions as cars darted in and out. Despite the close calls and hasty stops, the real loser was Kimi Raikkonen who went from third to out of the points when he suffered a puncture and needed a second stop.

Lewis got a second crack at Rosberg late in the race as both Mercedes drivers caught traffic. Hamilton’s challenge ended when he reported getting something in his eye and backed off the pace. He fell into the clutches of Daniel Ricciardo, the beneficiary of Raikkonen’s tyre troubles and teammate Sebastian Vettel’s engine and electronics failure after the first safety car. The Aussie was right on Lewis’ bumper through the turns but couldn’t make a pass thanks to the reported 80 HP difference between the Mercedes and Renault engines.

Rosberg’s win was his second consecutive Monaco Grand Prix victory and second win of the season. Despite finishing second, Hamilton loses the Championship lead thanks to his engine failure in Australia. Daniel Ricciardo may have started third and finished third but it took a little bit of luck to get there after a slow start.

Fernando Alonso finished fourth in the Ferrari. Nico Hulkenberg climbed up to fifth after missing Q3 on Saturday. Despite being the man who sent Sergio Perez into the Armco, Jenson Button finished in 6th. Felipe Massa came home 7th for Williams after his teammate retired with what looked like an engine or turbo failure. Romain Grosjean had a quiet day en route to 8th. And Kevin Magnussen rounded out the points in 10th.

Missing in that rundown was the 9th place finisher. While the old racer’s adage is “to finish first, first you must finish,” that could be applied to anyone in the field, regardless of where they’re running. Yesterday, that was the race for Jules Bianchi and Marussia. Bianchi may not have made the number of on-track passes of Adrian Sutil but he kept his nose clean and was able to keep pace with the mid-field runners. 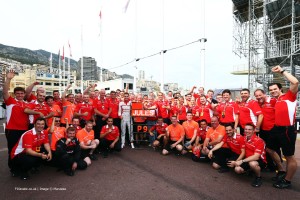 With the drivers ahead of him making mistakes, getting into accidents and suffering mechanical failures, Bianchi managed to keep his car on-track and out of trouble en route to a 9th place finish and the first two points scored by himself and Marussia. While he crossed the line in 8th, he was given a five-second time penalty for starting the race out of position but he still managed to score some critical points.

It’s very likely that he just secured a World Constructors Championship finish ahead of Caterham. Currently, Marussia is sitting in 9th in the WCC ahead of Caterham and the struggling Sauber team. If Sauber can’t find its way to the points, it’ll be the best ever finish Marussia had in its existence. Not a bad day for the Anglo-Russian squad.

Heading into race day, all the talk was about qualifying. While qualifying is critical in Monaco (unless you’re Adrian Sutil who will force his way through the field like a bat out of hell), the post-qualifying discussion was all about Nico Rosberg’s end to qualifying. 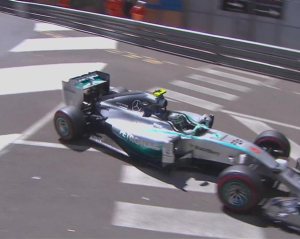 On his last flying lap, Rosberg appeared to lose control of the car under breaking for Mirabeau, a right-turn immediately preceding the Hairpin. After seemingly trying to keep the back-end of the car in line, Nico aborted his turn into Mirabeau and went left down the escape road instead. As a result, stewards were forced to wave the yellow flag which ruined everyone else’s final qualifying attempt and secured Nico the pole.

Where things got interesting is the fact that a car seemingly losing control and parking it during qualifying has happened before. Nico’s former teammate, Michael Schumacher, did it in a qualifying session in 2006. While I doubt that Nico did it intentionally, history and the result of Nico going off-track was far too convenient to spark a bit of controversy.

Interestingly, Rosberg had a couple of moments going into Mirabeau during the race that got a bit of attention. How much of that attention was as a result of Saturday’s action and how much was because nothing else was happening is something we’ll never know. However, it may just mean that Rosberg didn’t intentionally dive into the escape road on Saturday.

If Rosberg did manage to pull the wool over everyone’s eyes with this maneuver, it was a fantastic piece of driving. There’s no battle more fierce than that between teammates and considering how much is at stake for Rosberg and Hamilton, I can’t blame either of them for pulling out all the stops to get an advantage. In fact, I’d encourage them to do anything they can to fight for the victory. That would certainly make things exciting.

Pop quiz! Who’s the hottest pending free agent in Formula One? If you said Nico Hulkenberg, you’re wrong. The answer is Adrian Newey. 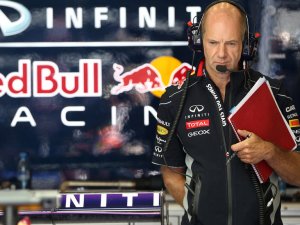 Despite the fact that the Red Bull isn’t the fastest car on the grid, it’s still believed that it would be on the point if it wasn’t for the anchors that are the Renault engine and ERS unit. That and four consecutive World Drivers’ and Constructors’ championships along with a track record of success have made him the single most important man in the sport right now.

This weekend, reports surfaced that Ferrari were willing to cut what is effectively a blank cheque to Newey to get him to jump ship. Reports indicated that Ferrari offered from £20 to £23 million in annual salary to lure the designer from Red Bull. Depending on the reports you read, that could have doubled or tripled Newey’s salary which is said to be between £7 and £10 million at Red Bull.

Newey says that he is committed to Red Bull for the “foreseeable future” but you have to wonder how long that future is. I’m sure the work environment at Red Bull is far more relaxed at RBR than the Scuderia but sometimes, it’s worth trading in that work environment to double your salary for a couple of years. Newey isn’t doing that now but a few years from now with retirement around the corner and his eye on a massive home to spend his days…

While waiting for my car while it was in for service on Saturday, I was watching TSN’s coverage of the World Hockey Championship. Formula One qualifying was over on TSN2. That’s not my complaint. You see, TSN advertised the Canadian Grand Prix in two weeks time. There wasn’t a mention of the Monaco Grand Prix which would be on less than 24 hours later. The Canadian GP was on some 364 hours from when I saw that ad.

That wasn’t the only TSN faux pas of the weekend. They cut the world feed commentary after the trophy ceremony and was left with only live audio instead. That’s not a problem. They do that annoyingly frequently enough that I’ve gotten used to it. Instead, they lingered some 30 seconds after the champagne was sprayed before unceremoniously hard cutting to their newspaper reporter panel show starring a foolish Toronto Maple Leafs apologist and the world’s safest and most inoffensive columnist. Where’s Dave Hodge to add some personality when you need it?

Without failure, TSN repeatedly demonstrates that they really don’t care about Formula One or its fans. They seen the demand for F1 as inelastic. Regardless of the quality of the coverage, they have the monopoly on F1 in Canada now that NBCSN has it and it doesn’t air in Canada and people are forced to go to TSN for (legal) F1 coverage. If only we could all tune away from TSN and still watch F1, it would send a message. Sadly, it may never happen.

The next round of the 2014 Formula One World Championship is in two weeks’ time. For our readers in Europe, they get a little primetime viewing on that Sunday as F1 circus makes a brief trip to North America for the Canadian Grand Prix at the legendary Circuit Gilles Villeneuve in Montreal.

Usually, the Canadian Grand Prix is the most exciting race of the year. The number of passing zones means that there is almost always some action happening on track. Even though it might not necessarily at the head of the field this year, we can expect some exciting and unpredictable action throughout the grid.

Nico Rosberg was won both street circuit races this season while Lewis has picked up the win on the four purpose-built racing circuits raced on so far this season. However, the Circuit Gilles Villeneuve is a hybrid of both streets and circuit. That could make this one a bit of a toss-up because both track records this season lend a claim to being the favourite. When you look at their careers in Montreal, Nico has never finished higher than 5th while Lewis has three wins and a 3rd in four finishes.