Since I’m trying to keep it spoiler-free, I don’t think I’ll be getting into too much detail about the nuances of the story. I am planning on doing a review with spoilers later on to do a more detailed look at the story. 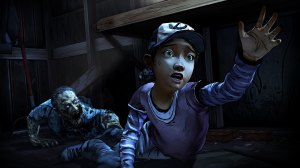 However, I can tell you that you’ll be playing as Clementine in this season of The Walking Dead. That’s not a spoiler. That’s how the game is advertised. What might be a bit of a spoiler is that the story starts with a short snippet a couple of months following the end of the last game with the rest taking place 16 months later. However, the game has been promoted as being months after the first season so that shouldn’t be a shock either.

In continuing some of the themes from Season One, the first episode of Season Two is about how that which seems the least dangerous is truly the most dangerous in a world of relentless homicidal zombies. It’s a theme that’s established repeatedly during the first 30 minutes and dangles in the background for the remainder. It’s certainly darker than the first season’s plot if only because there isn’t that Lee-Clem relationship that provides a ray of hope in an otherwise desolate world. 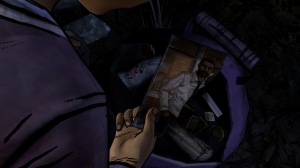 And because Clem doesn’t have Lee, there’s a certainly loneliness to Clem. I didn’t go with the review title of “Boulevard of Broken Dreams” because the game may have been disappointing compared to the first season. I went with that title because, regardless of who she’s with at a given point in time in this episode, Clem is effectively alone now. While Clem isn’t scared and helpless, she isn’t Lee and can’t do everything that he could. It changes your perspective on the world and the decisions you make.

The weakest part of the story might be the new characters introduced. They sort of show up all at once and I missed just about all their names (apart from Luke who is played by Jason Street- I mean, Scott Porter). None of them are particularly memorable so far. You get a short dialogue sequence with each of the new characters but nothing really noteworthy. You learn a bit about their background and motivations but not enough to really connect with or care about the characters.

There are a few plot holes in the story but I don’t think I can really get into those without spoiling the story.

While you can import a Season One save file and carry your decisions forward into Season Two, it’s probably worth noting that none of my decisions from Season One or the 400 Days DLC have cropped up yet. Perhaps something from those games will show up in Episode Two. For that matter, none of my decisions in this episode seem to have had an effect yet but I’d hazard that’s to be expected. Given that I found the story a bit disappointing, it probably shouldn’t come as a surprise that Nick Breckon wrote this episode in addition to 400 Days.

The gameplay really hasn’t changed much from the last game. It’s a point-and-click game with time-limited dialogue and some quick time events thrown in for good measure. The basics don’t really change much in Season Two. 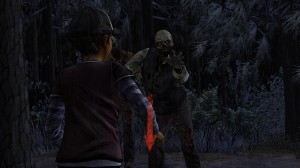 However, the quick time events have been cleaned up from last season. Combat is a lot more forgiving. Last season required you to click on a very specific spot to attack a zombie or other survivor. Now, you get a much bigger target area to click. As opposed to the arrows sliding in toward an image of a Q key, now, you get a circle filling up around a Q at the bottom of the screen. A dodging QTE, in which you have to match the movement direction indicated on the screen, has also been introduced and used a few times in the first episode.

The interactive elements all seem as though they’re tailor-made for the iOS or Vita versions of the game. The dialogue options aren’t in a list but in four boxes at the bottom of the screen which makes keyboard use decidedly confusing. You don’t scroll through options when you click on an object (options like look, touch, use a tool) but click on the icon on the edge of a much larger circle than last season’s. The quick time events have big Q and E buttons at the bottom of the screen which look good for tapping on an iPad and big red arrows which look ready for swiping on a touch screen.

Speaking of interactive elements, one interesting addition this year is a choices viewer in the main menu. Just like at the end of the episodes in Season One, you can compare five major decision points in each episode with all the other players. This time out, there’s a main menu screen that unlock the choice stats as you make the choices. As you play, you can probably figure out which decisions are being tracked but it’s still fun to see what you did the same and differently than everyone else. 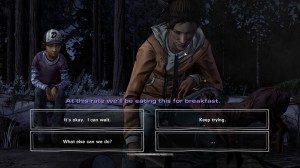 The long and short of the gameplay is that it’s not significantly different from the last season. Your opinion of the gameplay isn’t likely to change from the last five episodes. That being said, I’m not a fan of the new dialogue layout as it’s not as quick to read and time is critical in TWD’s dialogue selection and the timer bar seems harder to read since it’s out of the way compared to the answer options. And while the QTEs have been improved and are more responsive, the standard point-and-click elements are a little less responsive when you can pick between options.

But you’re not playing The Walking Dead for the gameplay so I probably could have skipped this whole section and you would have been no worse for wear. We’ll just have to wait and see if TWD: Season Two also has that save file screw-up bug that made me almost give up on Season One. 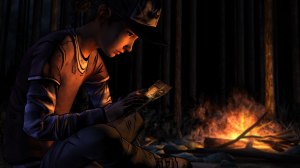 The graphics have been cleaned up a bit since the first season. Telltale has had a few months to work on the game engine and it definitely shows. The graphics look sharper and more detailed this time out. As an added bonus, the engine also seems less hard on your hardware. Okay, this is anecdotal evidence but I swear that my laptop’s fan was fairly quiet playing All That Remains where as I thought my computer was going to melt playing 400 Days.

Melissa Hutchinson is back as Clementine and Hutchinson is probably well on her way to winning more voice acting awards for playing Clem. In the year-and-a-half or so in game time since the last piece of TWD content, Clem has grown up and Hutchinson has changed Clem’s voice subtly to make her sound older. Apart from Hutchinson, only appearances from new characters played by Scott Porter (Luke) and Brian Sommer (Pete) stand out for now. Like I mentioned above, though, the new characters didn’t get a whole lot of time with Clem so talking about the voice acting of the new characters at this point in time may not be an accurate reflection of the overall voice acting in the game. 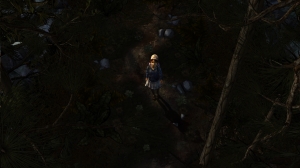 The Walking Dead: Season Two seems to be exactly what you’ve come to expect from Telltale Games’ The Walking Dead series. All the parts that you loved from Season One are there. It just doesn’t seem to have come together into that cohesive whole yet. Maybe it’s just nostalgia (or at least as much nostalgia as one could have after 18 months) but I’m just not as excited after concluding All That Remain as I was after A New Day.

Episode One isn’t a bad game but it’s not great. Once the pieces come together and you can play Season Two for a bit longer than 90 minutes. In addition to the disappointingly short length (90 minutes as opposed to the roughly three hours that Season One episodes ran), the fact that I’m just not that excited about Episode Two compared to how I couldn’t wait for episodes last season. I think that’s as good an indication as any about what I thought of All That Remains.

The Walking Dead: Season Two – Episode One was played on Windows PC but is also available for OS X, PlayStation 3, Xbox 360, PlayStation Vita and iOS. The review code for this game was provided by Telltale Games. Your impressions of the game may change depending on platform played on, PC specs and whether you consider man the most dangerous game of all.