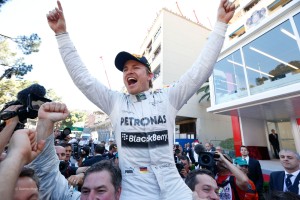 The Monaco Grand Prix is absolutely unparalleled in motorsport for glamour and pageantry. Unfortunately, Monaco is almost unparalleled in terms of its ability to turn Formula One into a parade. If it wasn’t for a pair of safety cars and a red flag, this year’s edition of the race would have also been a parade. This year, it was Nico Rosberg who picked up the win in this season’s most prestigious race but is certainly wasn’t without a tonne of controversy for his Mercedes team.

The most critical day at Monaco is Saturday when the cars go out for qualifying. With passing next to impossible, where a driver starts is the biggest factor into where he finishes in Monaco and it was Nico Rosberg who led the race from the red lights with teammate Lewis Hamilton and the Red Bull boys of Sebastian Vettel and Mark Webber following.

Naturally, how they qualifying is how the race went for the early part of the race. What started to mix things up was when Felipe Massa clouted the wall heading into Ste. Devote. Webber had already made a pit stop to try to vault his way up the running but Vettel immediately came in. The Mercedes didn’t until the safety car was deployed. The plan almost worked for Red Bull. The safety car caught and held up the field from just past Casino Square to the Hairpin. If they hadn’t been held up for so long behind the safety car, they might have managed a one-two. As it was, Rosberg retained the lead but Hamilton fell to 4th. 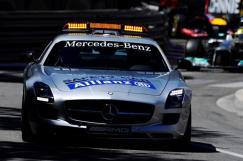 The restart came and went without drama though Hamilton certainly gave Webber something to think about into a couple of turns. The race was a bit processional with a couple of more exciting moments such as a red flag that resulted from Max Chilton and Pastor Maldonado clouting the barrier at Tabac and blocking most of the circuit with the TecPro barrier. A second safety car was required when Romain Grosjean and into the back of Daniel Ricciardo on the run into the Nouvelle Chicane.

The win went to Nico Rosberg which marked his second career win and the first Monaco Grand Prix win for a Mercedes factory team. Sebastian Vettel finished in second and extended his World Drivers’ Championship lead from four points to 21. Mark Webber rounded out the podium in third. I was really hoping his pit strategy would allow him to have that mic drop retirement announcement while holding the winner’s trophy but we can’t always get what we want.

Lewis Hamilton was the biggest loser of the day among drivers who kept their nose clean as he finished fourth after a 2nd place start. Adrian Sutil benefitted from scads of crashes in front of him and managed to finish 5th. Jenson Button had some issues with how his teammate raced him but managed to keep his finger off the radio button long enough to finish 6th. Fernando Alonso just had no speed today which resulted in a 7th. Jean-Eric Vergne very quietly finished 8th. Paul di Resta didn’t make it through Q1 but still crossed the line in 9th. And despite getting punted by Sergio Perez, Kimi Raikkonen grabbed the final points position.

It wouldn’t be a race weekend without some sort of tyre controversy popping up and this week’s issue is a massive one.

Yesterday morning, news broke that Mercedes AMG held a 1000 km private test at the Circuit de Catalunya following the Spanish Grand Prix. Reports say that Mercedes didn’t initiate the test but were requested to run this test by Pirelli so they could work out some of their recent issues. According to Mercedes, this is above-board since Pirelli’s contract allows the tyre manufacturer to request that an active team runs a private tyre test if they deem there to be a need to for safety.

Ferrari and Red Bull have lodged formal protests of the test with the FIA. I’m not sure what regulation they could be protesting though it’s probably the ban on in-season testing. I have no idea what punishment the FIA could issue if the protest is upheld. Presumably, the best case scenario for Mercedes would be a retroactive disqualification for Monaco. Considering what McLaren got for Spygate in 2007, Mercedes might get stripped of all points this season. If that happened, you have to wonder if that’s the cost of running Lewis Hamilton. Sign Lewis and lose all your points for that first season.

Also, I haven’t seen it formally reported anywhere else but NBC’s Will Buxton said that a rumour had popped up today that Ferrari had a similar test after the Bahrain Grand Prix. A BBC report suggested that test was actually using Ferrari’s 2011 car while the Mercedes test used the 2013 car.

Issues like this are only going to get worse going forward. Pirelli is developing its tyres using a car that’s two or three years old for far faster cars. It’ll just get worse next season when Pirelli is developing new tyres for cars with a different rules package using an outdated car. Well, that’s assuming that Pirelli’s tyre supply contract is renewed for next season.

This isn’t the only bit of Pirelli tyre news this week. Pirelli has been the centre of a more general controversy over the last two weeks as they talk about changing their tyre compounds for the Canadian Grand Prix.

Everyone has weighed in on this one from the teams to the FIA. The FIA say that the tyre compounds are locked in for the season when Pirelli submitted their compounds to the teams last year. The only reason why compounds can be modified is for safety reasons. In explaining the need for changing compounds, Pirelli talked about there being too many tyre changes in winning strategies. The FIA countered with the designed degradation rate is not a safety issue. However, if Pirelli believes some of the recent tyre delaminations (the middle rubber strip detaching from the tyre) is a sever enough issue, the FIA will permit changes.

Not everyone is happy with the changes which is said to solely be replacing the steel belt in the rear tyres with kevlar as was the case last year. Lotus, Ferrari and Force India are the most opposed to any changes. While the likes of Red Bull and Mercedes are struggling this season, Lotus and Ferrari are thriving on this year’s tyres. Force India has risen to the top of the mid-field food chain this year.

I almost didn’t believe it when the rumours first popped up a couple of months ago and I’m not really sure I believe it now. After an embarrassing return to Formula One in the 2000s, Honda is returning to the sport as an engine manufacturer in 2015. This time, though, they’re going with an established effort in the form of McLaren.

This isn’t the first time that the two companies have worked together. From 1988 to 1992, McLaren’s were powered by Honda engines. The result was one of the most dominant combinations in F1 history. They combined for four World Drivers’ Championships and four World Constructors’ Championships in five years. They also picked up 44 wins out of the 80 races over that stretch.

The new turbo V6 formula comes into effect next season which could prove to be an advantage for Honda. They could see where everyone else is in terms of power, torque and weight in 2014 and tweak their engine to get the jump on the competition despite being a year behind. Similarly, not having that extra year of running is very likely to put the Honda V6 behind in terms of reliability work. You can test for a lot of things in a dyno but there’s no substitute for proper race conditions.

Speaking of former F1 engine manufacturers planning a come back, BMW’s name has been thrown back into the ring. Well, BMW hasn’t said that they’re planning to come back to Formula One. Bernie Ecclestone said that he believed that BMW would return thanks to the new engine regs.

BMW, on the other hand, says that the aren’t interested in coming back to the sport. BMW motorsport boss Jens Marquardt says that running road cars is BMW’s current focus. Their factory efforts will be focused on DTM and sports cars.

The last time they went through a rules change, they got it so terribly wrong that they withdrew from the sport and nearly killed Sauber F1. No wonder why they aren’t interested in jumping back into the F1 ring.

Let’s do a little engine supply news round-up while we’re busy talking about it.

This weekend, Williams finalized a deal to get Mercedes engine power starting next season. After two fairly unsuccessful seasons with Renault engines, the switch in manufacturers can’t be a bad thing for the Grove-based squad.

Toro Rosso will be ending its engine supply deal with Ferrari after this season and follow the lead of the main Red Bull squad by running Renault engines. That rumour was relatively recent but the deal was officially inked this weekend. It might be worth noting that the rumour mill again suggests that Red Bull’s engines will be badged as Infiniti engines rather than Renault.

In terms of rumours, this weekend’s big rumour is that Honda is looking to supply more than one team. It’s believed that they will be targeting the Lotus squad for those engines. There would be a slight irony to that as Lotus was the Renault factory team before the French car manufacturer withdrew from the sport as a constructor.

Finally, with Cosworth withdrawing from the sport at the end of the year, Marussia has to find a new engine supply deal. They won’t be going with PURE engines, however. Instead, it appears they’ll be signing a deal with Ferrari for their V6s. Not that this rumour should surprise anyone. It was believed that signing Bianchi was part of a deal for a Ferrari engine supply. 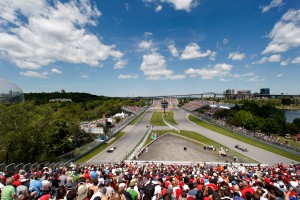 While the Monaco Grand Prix was more exciting off-track than on, the next race will be the exact opposite. In two weeks, the Formula One World Championship makes its first stop of the season in the Americas for the Canadian Grand Prix. The Circuit Gilles Villeneuve is a wild card weekend that doesn’t necessarily reflect on the rest of the season but is usually the most exciting race of the season.

Given how much passing occurs in the Canadian GP, I wouldn’t expect to see the Mercedes do well in this race. I’m still not sold on their race pace given that Monaco was largely a parade. If the tyre compounds go through a significant enough change, who knows who could be on top in Canada. If the tyres perform roughly the same as they have so far this season, it should be a battle between Lotus and Ferrari. If the tyres revert to something closer to 2012, you have to like Red Bull’s chances.

One thought on “F1 Monaco GP: To Finish 1st, First You Must Win The Pole”