The talk about tyres has been growing since Pirelli took over as the sole tyre manufacture in Formula One. This weekend’s Chinese Grand Prix saw tyres and pit strategy play a significant part. Fernando Alonso won the race but he certainly wasn’t what people were talking about. Even on the podium, the drivers were talking amongst themselves about the effect the tyres had on the race.

The race started with Lewis Hamilton on pole and Kimi Raikkonen alongside. That didn’t even last to the first corner as Raikkonen spun his tyres on the start and dropped to fourth before the end of the start straight. Fernando Alonso and Felipe Massa jumped to the 2nd and 3rd positions, respectively.

The top seven qualifiers all started on soft tyres which had an estimated useful life of about five laps. Coincidentally, it was around lap five that they started pitting with the Mercedes pitting as a result of losing their tyres first. This allowed the two Ferrari boys by before pit stops. Ferrari bringing in Alonso first and Massa seeing his race ruined by being forced to stay out an extra two laps and the car’s pace fall off a cliff. The early stop caused the frontrunners to fall into traffic in the mid-pack.

At the back of the grid, Mark Webber employed a brilliant strategy to make up for his start from the pit lane. He began his race on the soft tyres but switched to the medium compound after completing his first lap. The result allowed him to get right up with the frontrunners after they made their first stop. The reason why Webber’s strategy didn’t work is because his right-rear tyre fell off after his second stop. He should have scored some points today but it wasn’t to be. It’ll be interesting to see if this strategy gets mimicked next week by a team starting farther back.

The race was also punctuated by a number of collisions. On Lap 5, Esteban Gutierrez showed a little bit of rookie nerves and inexperience as he missed his braking point for the hairpin and ran into the back of Adrian Sutil. Before his retirement, Webber made an overly ambitious move on Jean-Eric Vergne and lost part of his front wing. Even Raikkonen couldn’t get through the race unscathed as he put a hole in his car’s nose after being forced off-track by Sergio Perez.

As pit stops cycled though, it was Alonso who was able to stay up front. The likes of Nico Hulkenberg and Sebastian Vettel were able to hold the lead at points but their strategies couldn’t hold off the pace and strategy of Alonso. Vettel’s strategy very nearly got him a podium from a 9th place start as he finished the race on fresh softs to everyone else’s mediums but traffic impeded what seemed to be a possible charge to second. 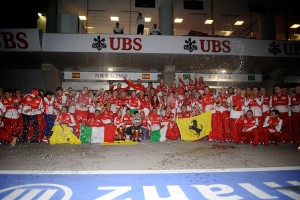 The win was Alonso’s first of the season and his second podium from two finishes. I’d say that he and Ferrari will be a serious contender for the championship based on current pace. Kimi Raikkonen had a quiet race but the E21 takes such care of those tyres that his long-run pace keeps him in the hunt. If not for that slow start, he probably would have picked up his second win of the season. Lewis Hamilton rounded out the podium after his Mercedes showed that it doesn’t take care of the softs particularly well.

Sebastian Vettel finished in fourth after skipping Q3 yesterday. Jenson Button tried a two-stop strategy and it cashed in for his first top-five of the year. Give McLaren’s pace, they’ll need to try more of this to have a shot at a podium. Felipe Massa’s long opening stint caused him to fall to 6th. Daniel Ricciardo started seventh and finished seventh as he looks to get promoted up to RBR next year. Paul di Resta says that avoiding Sutil’s accident cost him some spots but still managed 8th. Romain Grosjean isn’t doing much to  reward Lotus’ confidence in him. His 9th gets him his third straight points finish but he’s not contributing much to the Constructors’ Championship chase. Nico Hulkenberg rounded out the points in P10.

Once again, the FIA had a failure of their race control to car telemetry system. That makes the FIA three-for-three this season in telemetry failures. As with Australia and Malaysia, the FIA could not activate the in-car warning lights or disable DRS during yellow flag periods.

This time out, the result was that eight drivers were called in front of the stewards, including Kimi Raikkonen, Sebastian Vettel, Jenson Button, Daniel Ricciardo, Romain Grosjean, Valtteri Bottas, Max Chilton and Mark Webber. All drivers were cleared of any penalties but it shows that this issue needs to get sorted fast before race results are affected by this issue. Sadly, it doesn’t look the FIA is trying to hard to fix anything.

Bernie Ecclestone has finally opened up about the bribery scandal that he’s in the middle of with German banker Gerhard Gribkowsky. Or, from Bernie’s perspective, it’s a blackmail scandal.

Bernie says that the alleged $44 million bribe was a blackmail payment as Gribkowsky had threatened to feed false information to UK tax authorities (Her Majesty’s Revenue and Customs) about his involvement with the trust that owns the Paul Ricard Circuit in France. Under UK tax laws, a British taxpayer is not allowed to have control over a trust in a foreign jurisdiction. Control would cause the trust to be considered a sham and tax would have to be paid on it. Ecclestone told The Daily Telegraph that the tax payments could have been in the hundreds of millions, if not billions, of pounds.

Ecclestone says that his involvement with the Paul Ricard is solely as a consultant to the Trust with regards to the renovations to the circuit to get it up to the FIA’s top standards so it would be eligible to host all levels of FIA sanctioned racing, including F1. However, German prosecutors are still investigating the alleged bribe and the HMRC are investigating whether or not Ecclestone has violated any trust laws. The F1 Supremo isn’t out of the woods yet.

Speaking of odd things with Bernie, he’s changing the order of the hospitality suites in the paddock. His thinking is that by not letting teams put their massive hospitality setup directly behind their garage, they’ll be able to interact with other people in the paddock while they walk around.

I guess this makes drivers and other notable team members more accessible to the VIPs. It doesn’t do much to help the public. One thing I keep hearing about IndyCar is how fan-friendly everyone and everything is in their paddock. Making the drivers walk a little farther to their fortress of solitude through a VIP zone doesn’t do much for fan service when the only time they see them outside the car is a 15-minute autograph session on Thursday. It’s a nice idea but only really allows for more opportunities for drivers to run into cameramen like Juan Montoya.

One of the reasons that Lewis Hamilton left McLaren to Mercedes GP was to get a bit more autonomy when it came to personal endorsements and various opportunities outside of racing.

Well, one of those things that Lewis can do with Mercedes rather than McLaren is make a rap album. He’s been working on an album with producer Angel, who has worked with the likes of Rihanna and Frank Ocean.

Angel says that the album is “off the hook” and that the songs on the album are a mix of “dirty south” rap, pop and soul. I don’t know about you but I get the distinct feeling that no good can come of this.

There ain’t no rest for the wicked nor for the Formula One World Championship. It’s the second back-to-back of the season as they’re heading to Bahrain for next weekend’s  Bahrain Grand Prix at the Bahrain International Circuit. It’s another Hermann Tilke track which means that cars fast in Malaysia and China should be fast again in Bahrain as long as they can handle the heat.

I think this one will come down to tyres once again. The variety of strategies made things interesting today, even if I was a little disappointed that tyres seemed to dictate the race. Anyway, Ferrari has the most wins at Bahrain and only Alonso and Massa have multiple wins in the race. They have to be the favourites. Don’t count out Kimi Raikkonen who has been running strong this season. Lewis Hamilton has been running well through the first three races and is knocking on the door of his first win with Mercedes.