While overtaking was plentiful in this year’s Belgian Grand Prix, there was one driver who was not passed all day. Jenson Button scored his first pole for McLaren this weekend and followed that up by scoring a win while leading all 44 laps of the race. While the race for the lead may not have been exciting, the fight for every other position was anything but dull.

The race started early and picked up quickly with a bang. Pastor Maldonado appeared to jump the start, though that was a non-issue after spinning on the exit of Turn 1 and retiring on Lap 5. Behind him, Romain Grosjean and Lewis Hamilton collided while battling for position into the La Source hairpin. Lewis lost dipped a half a tyre onto the grass and lost control causing him to run into the back of Grosjean who ran into the back of and over Sergio Perez and over the nose of Fernando Alonso. Hamilton didn’t bother with the brakes at this point and ploughed into the back of Alonso and Kamui Kobayashi. In one corner, two championship contenders and Sauber’s chances for a win or podium were done.

After the resulting safety car period, Button stormed away and built a massive lead that was never challenged. He didn’t even lose the lead on pit stops. Raikkonen assumed second but lost it to Nico Hulkenberg when the safety car period ended. Michael Schumacher went from 13th to 5th on Lap One and took six laps after the restart to climb to second. Raikkonen regained second on pit stops but was chased down and overtaken by Sebastian Vettel.

Button claimed the win by over 13 seconds from Vettel. Raikkonen finished in third which was his third straight podium finished and sixth this season which puts him level with championship leader Fernando Alonso. Hulkenberg never dropped below 8th during the race before making his way to 4th at the finish. Felipe Massa steadily climbed his way up the order to finish 5th. Rounding out the points were Mark Webber, Michael Schumacher (after a late switch to a two-stop strategy), Jean-Eric Vergne (his first points since Malaysia), Daniel Ricciardo (first points since Australia and the first double points finish for Toro Rosso since last year’s Korean GP) and Paul di Resta.

The implications to the championship weren’t big but it does make things more interesting. Alonso’s lead in the championship is down to only 24 points (or less than one race) over Vettel. Webber is now behind by 32 points with Kimi Raikkonen only one point behind the Aussie. Lewis Hamilton is the only other driver within two races of Alonso at 47 points behind. While Button’s win brings him 25 points closer to the championship lead, he’s still 63 points adrift of Alonso with eight races remaining in the season.

The collision at the start of this race provoked the expected reaction. The British-heavy F1 media and blogging contingent blamed Grosjean for the first turn melee. However, when was the last time you saw a massive collision heading into turn one of a Grand Prix not caused by a mechanical failure? Collisions of that scale off the start are exceedingly rare.

Blocking and chopping across the track at the start of a race is fairly common since the practice was popularized by Michael Schumacher. Even when he made incredibly sharp chops, he didn’t cause many collisions. That’s because the driver behind backed out in order to continue the race. You can’t win the race in Turn 1 of Lap 1 but you can end your race there. That’s something Lewis forgot. Grosjean did something that has been dozens, if not hundreds, of times before without a taking out a quarter of the field. That’s because most drivers will back out rather than be run off the tarmac. Lewis Hamilton isn’t most drivers, though.

Last season, Lewis was under fire from the media for being too aggressive as a result of frequent collisions during the race. He collided with Massa repeatedly last year and got into it with Maldonado on occasion. This year, he’s managed to stay out of trouble for the most part. There was the run in with Maldonado where he blocked Pastor off-track which resulted in a collision as the Williams driver had to evade a speed bump. That move was largely inexplicable after Hamilton had earlier pulled over to allow Raikkonen through. Hamilton forced the issue before the first turn of the first lap of the race and the result could have massive implications for the championship.

So while the generally British-friendly media might be backing Lewis in his collision with the Frenchman Grosjean, I wouldn’t be so quick to assign all the blame to Grosjean. Like hundreds of drivers before him, Hamilton could see the car ahead trying to block the inside line. He could have backed out of the throttle or dabbed the brakes rather than keep his foot flat. It’s not like Grosjean side-swiped him. In the grand scheme of start line blocks, it was fairly gradual.

After all that exposition, now I have to sort out why the FIA’s stewards banned Grosjean from the Italian Grand Prix. Somehow, Grosjean’s move is so illegal and dangerous that a ban is required. When Grosjean was hip-checked into the barrier at the start of the Monaco GP, Alonso didn’t even earn a talking to from the stewards. It would be slightly inflammatory to suggest that the stewards are biased in favour of the established top drivers but they are, at the very least, inconsistent and very likely incompetent. They’re going to have to outlaw any blocking attempts or lane changes on the start to prevent this from happening again because they’ve effectively ruled as the cause of the accident.

If KERS wasn’t enough for the environmentally minded, the FIA is going to sanction something even more eco-friendly. Last week, the FIA announced that 2014 would see the launch of an all-electric racing series called Formula E.

The new racing series plans to feature races in city centres with the thought that taking the races to the people will work best to accomplish the series’ goal of promoting electric cars and technology. The plan is for the series to launch with a full grid of 20 drivers representing ten teams. However, the teams will need more than two cars as the current plan is for drivers to swap their cars, rather than battery packs, when making pit stops.

There are still some details that haven’t been revealed. We know that the cars will be single-seaters but will they look like a Formula One car or the Adrian Newey designed X2010 car from Gran Turismo 5 or something else entirely. For all we know so far, we could see a variety of differently designed entries. We also know that qualifying will be “playoff style” but how long will the races be? Formula E is a good concept and definitely necessary to push the development of the electric car. They haven’t detailed enough of a plan for me to actually believe this can successfully get off the ground.

Robert Kubica hasn’t been in a Formula One race car since his rally accident which resulted in fractures to his right hand, forearm, elbow, shoulder and leg. He suffered a further setback this past January when he fractured his right leg in a slip-and-fall accident at home. However, his desire to get back into a racecar hasn’t diminished. Kubica spent four days driving a Ford Fiesta WRC rally car at a circuit in France. The team says that things went well at the test. I don’t know what that means for Kubica’s F1 future if he has one but at least there’s still hope he might eventually race again. 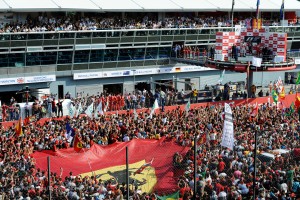 While it might have been five weeks between the Hungarian Grand Prix and yesterday’s Belgian Grand Prix, the next round of the Formula One World Championship is only one week away. The Italian Grand Prix from the historic Monza circuit is next Sunday. The track is famous for being the fastest one on the calendar with top speeds over 200 MPH and average lap speeds over 150 MPH. As much as every driver wants to win this race, it’s also the one everyone needs to lose. Over the last 20 Italian Grands Prix, the winner of the race has gone on to win the World Drivers’ Championship only three times (Schumacher in 2000 & 2003 and Vettel in 2011).

Today’s race would make me think that the low-downforce configuration of the McLaren is blindingly fast. However, the speed traps showed that the Ferrari engine, especially in the Sauber, is the fastest on the grid. The lack of horsepower in the Renault engines are likely to keep Red Bull drivers looking in their mirrors for DRS-aided passing attempts. The Italian Grand Prix is likely to come down to a battle between McLaren and Ferrari. The Mercedes GP and Sauber cars might just be fast enough to throw a wrench into things for the top teams.