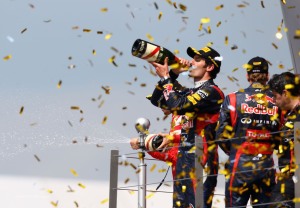 From the start of the race, it appeared as though Fernando Alonso would storm off to his second-straight win. However, the race isn’t won until the drop of the checkered flag. A poor call on strategy cost Alonso the race as Red Bull outsmarted Ferrari which allowed Mark Webber to pick up his second win of the season.

After rain delays made Saturday’s qualifying a two-and-a-half hour long session, it was Fernando Alonso who led away from the lights from Mark Webber. The Ferrari opened up a gap of about five seconds and maintained it for the majority of the race. Alonso only lost the lead on the exchange of pitstops as Lewis Hamilton stretched his first stint longer than the Ferrari driver. Alonso only spent three laps in second before fresh tyres allowed him to catch and pass Hamilton.

The other Ferrari was surprisingly racy as well. Felipe Massa was all over the back of Michael Schumacher for several laps before getting by the Mercedes on Lap 11 for third. He almost immediately lost the position on the exchange of pitstops to Sebastian Vettel. Schumacher lost out to Raikkonen on pitstops and fell down the order to 7th.

The final stint was where the action up front happened. Most drivers started the race on soft tyres and finished on the hard tyres. That’s what Mark Webber did. Alonso did the opposite. He started the race on hard tyres before doing his third and final stint on softs. Whether it was due to tyre degradation or just a lack of pace on the soft tyres, Alonso couldn’t maintain the pace on the option tyres. Webber was able to catch him over the last stint and make the pass for the win with seven laps to go.

For Webber, it was his second win of the season (his first was in Monaco) and his second win in the British Grand Prix (the other being in 2010). Alonso maintained his points lead with his 2nd place finish but the lead was trimmed from 20 to 13 points. Sebastian Vettel had a decidedly uneventful race as he completed the podium in 3rd.

Felipe Massa backed up his 5th place in qualifying with a 4th in the race for his best finish of the season. Kimi Raikkonen finished in 5th to round out the top five. Completing the points finishers were Romain Grosjean (who charged back from 22nd after an early collision), Michael Schumacher, Lewis Hamilton, Bruno Senna and Jenson Button.

It wasn’t the sort of day that Michael Schumacher wanted. He started third thanks to his noted prowess in wet weather allowing him to push his Mercedes ten places farther up the grid than teammate Rosberg. The car faded early on before Old Seven-Time finished in 7th. Presumably, the car was setup to run in the rain which cost him in the dry race. 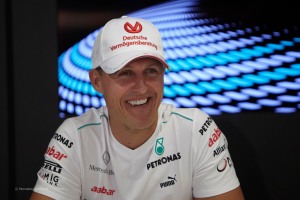 The reason why I bring up Schumacher is because Mercedes GP boss Ross Brawn said that he expects Michael to make a decision about his future by the end of the summer. Schumacher is in the final year of his three-year contract with Mercedes. His comeback hasn’t been quite as good as everyone hoped but considering that the dominant 2009 Brawn GP 001 was light years ahead of the 2010 to 2012 Mercedes GP cars and that Michael was out of the sport for three years, it’s understandable why he wasn’t challenging for wins. That run of bad luck early this season didn’t help.

Regardless of what you think of the comeback, the fact of the matter is that Schumacher is still one of the all-time great F1 drivers. You could argue all day as to whether the best driver of all-time is Schumacher or Senna or Fangio or Gilles Villeneuve but the fact remains that he’s in the discussion regardless of what happened in this comeback.

It’s funny to see the difference in philosophy between drivers when it comes to collisions. The two noteworthy collisions of the day were the opening lap dust-up between Paul di Resta and Romain Grosjean and the Lap 12 crash between Sergio Perez and Pastor Maldonado.

In the former collision, the close quarters of an F1 start caused di Resta to slide his right-rear tyre into the front wing of Grosjean’s Lotus. The damage from driving post of a lap on a flat tyre ended di Resta’s day. Grosjean’s front wing was damaged in the collision and dropped to 22nd and last among cars running after pitting to replace his wing. Despite being forced to retire, di Resta wasn’t upset with Grosjean. And despite the fact that his day could well have been ruined, Grosjean saw this as a racing incident which was a standard part of F1 race starts. 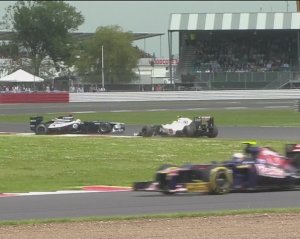 Later in the race, Perez tried passing Maldonado around the outside of Brooklands corner. The Williams power slid in the corner and collided with the Sauber. The crash broke Perez’s left-rear suspension and forced retirement on the spot. Maldonado was able to carry on with the race and finished one lap down in 16th. Perez was absolutely livid with Maldonado. He insisted that the Venezuelan was dangerous and didn’t respect his fellow drivers.

In both instances, we have a pair of “racing incidents.” These are things that happen in the course of racing without being the fault of one driver or the other. Perez was justifiably upset at losing out on a points-paying finish but it wasn’t Maldonado’s fault. It was two drivers running off the usual line which caused Maldonado to lose grip and slide into Perez. It wasn’t an intentional move. I doubt Maldonado could intentionally power slide into Perez like that no matter how many times he tried. At the very least, the differences between Grosjean and Perez’s reactions show how much more mature the Frenchman is than his Mexican counterpart.

There’s a fight brewing in F1 over cost-cutting and cost-management. The teams were unable to reach a consensus on updates to the Resource Restriction Agreement by June 30th which means that changes proposed are not guaranteed to make it into the 2013 Sporting Regulations. The FIA is rumoured to be accepting cost-cutting regulation changes supported by the majority of teams until July 24th. Theoretically, anything all teams agree to could still be added to the Sporting Regs provided that consensus is reached before the deadline for entries for next season on September 30th.

The biggest issue appears to be getting Red Bull and Toro Rosso to agree to anything. With the massive resources of Red Bull behind it, RBR has no incentive to agree to cost containment. Toro Rosso is owned and sponsored by Red Bull so they’re following the company line. There is a long list of cost-cutting measures that have been agreed to by 10 of the 12 teams and an agreement to have the FIA police the Resource Restriction Agreement which the Red Bull teams won’t agree to. The only way any of these provisions will get into the Sporting Regs is if the FIA and World Motor Sport Council allow a majority approval of the new RRA. 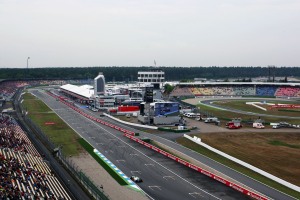 The Hockenheimring is really a shadow of what it was prior to the track redesign for the 2002 German Grand Prix. The old Hockenheim was a 6.8-km loop through the forest slowed only by a couple of chicanes. It was fast, dangerous and fun. The Hermann Tilke redesign removed the speed from the track and replaced it with the Tilke signatures of a long straight followed by a hairpin and a series of medium speed corners to prevent overtaking. Sadly, the only place you’ll find the old Hockenheim is in video games.

Like all Tilke-dromes, the early frontrunner has to be Red Bull. They haven’t had the world dominating pace that they showed last season but they do lead F1 this season in races with a car finishing in the top five. That might sound like an obscure statistic but it shows that the RB8’s pace is consistent across all track types. The Ferrari of Fernando Alonso can’t be counted out anywhere this season. Of course, given how F1 has gone this season, who knows who could win this one. At least now we can see the cream rising to the top.