If you’re taking secret pictures of women in public, the best way to destroy evidence is definitely not eating it. A Japanese man in his 50s was caught by a store employee taking photos of a 20-something woman. Before the store employee could get to the man, he ate an SD card where the photos were being stored on. Police arrested the man and eventually found the SD card… When he pooped it out. I can’t imagine this was pleasant for anyone involved. 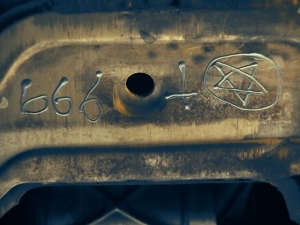 A woman from Fort Worth, Texas, brought her car in for an oil change but got more than just regular service. She left with some Satanic markings written on the front crossmember of her car. According to the woman, the markings were written by a Wal-Mart car service technician who “had an attitude.” Well, I always thought the quality of service at Wal-Mart was as good as a curse but apparently I got off easy. 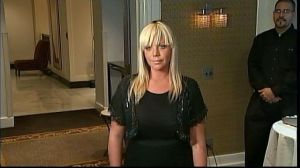 That woman on the right is Lauren Odes. She claims that she was fired from Native Intimates, a New York City store, for being too hot. She was placed there by a temp agency where she performed data entry and coordinated shipments. Allegedly, she was told that she was “just too hot for this office.” She also admitted to wearing form-fitting attire. Naturally, her lawyer is Gloria Allred. We’re leaving that alone so we don’t get sued.  If she wins this lawsuit, I’m totally trying the same thing if I get fired from a job.

Sometimes, a well-planned robbery doesn’t go how you wanted it too. A Florida man tried to rob a Lowes store by demanding that a cashier open the register. That failed when the cashier ran away and the would-be crook was chased out of the store by customers and employees. He then punched the driver of a pickup truck that was blocking his escape route. Finally, he reached his getaway vehicle which was a golf cart that belonged to a nudist colony. However, he was arrested when he reached the colony. The best laid plan of mice and men…

Good news: Our Car Wall is now scientifically valid. A survey by AutoTrader in Canada shows that 36% of Canadians, 40% of Canadian women and 50% of Canadians under the age of 35 feel more attractive while driving a “sexy car.” PR for AutoTrader also claims that the survey shows that people will judge you based on what you drive. So remember our rules for the Car Wall: All Audi drivers are cocks, women like eco cars put not ones that put form ahead of function and any car we drive is uncool.