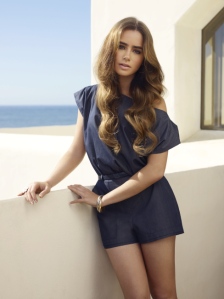 It’s Entertainment Link-Off time since it’s Saturday night! Kicking off this entry is Lily Collins who is starring in the Taylor Lautner actioner Abduction. Sadly the film is critically panned, so perhaps something on the other end of the spectrum is worth seeing… like Moneyball for example!

After the jump, some Elmo related news, Batman likes to beat clowns, Conan O’Brien has a guy moment, an awesome office escape video and two song recommendations to make up for my missing music segment from the upcoming podcast!

As much as I want to see a second Kick-Ass film, we all figured that it wasn’t all that likely to happen. Mark Millar has been adamant about a second flick to come, but he’s finally admitting defeat… sort of. (LA Times)

Charlie Sheen is quite entertaining despite the fact that he tends to go off the wall quite a bit. Anyway, here’s a fun list of 7 movies (with photoshopped posters) that would have been a perfect fit for the former Two and a Half Men star. (Next Movie)

Doesn’t Elmo make you feel warm and fuzzy? Anyway, trailer for the documentary Being Elmo is finally floating around the internet! (The Playlist)

Speaking of Elmo, the little red puppet teamed up with Cookie Monster to re-enact some hit shows like Big Bang Theory, The Office, CSI Miami and more! (Entertainment Weekly)

The Bechdel Test was developed by Alison Bechdel back in 1985. To pass the test was quite simple, just feature a scene containing dialogue -between- two women. That is a back and forth conversation. Sounds simple right? Turns out, some of the more popular films of the modern era continued to fail the test. (Film School Rejects)

For Supernatural fans, if you’ve been following the show and watched the season 7 premiere already, here’s a somewhat spoiilery yet fun list of what Castiel’s 10 commandments would be. (TV Guide)

Batman sure knows how to lay down the law… the only problem is that when the Gotham PD arrests two different clowns, they may have led the Cape Crusader to the wrong one. (College Humor)

Batman spends a lot of time at night fighting crime… it wouldn’t be a surprise if he has a habit of coffee consumption. (The Warehouse)

Possible Transformers ride at Universal Studios?!?! If it’s true, I am so there! (Slashfilm)

Conan O’Brien had a very guy moment while interviewing Nicole Scherzinger during his show… You can catch a glimpse of what happened around the 2 minute mark. (Team Coco)

People have been complaining about how similar NBC’s The Playboy Club is to AMC’s Mad Men. While the former technically didn’t plagiarize the latter, there are some awfully similar shots between the two shows. Not convinced? Look at these screen by screen comparisons. (NY Mag)

Awesome POV action short that’s worth a look. It might not work as a full feature, but it certainly does wonders in a short like this. Take a look at the wonderfully choreographed and edited Insane Office Escape!

Why are zombies so stiff? Turns out, they need a little bit of yoga in their lives… I mean undead lives.

To make up for my lack of music recommendations in the upcoming podcast, here’s two in the ELO. First is the latest video from Sara Bareilles called Gonna Get Over You. Here’s a fun tidbit though, it’s directed by Jonah Hill!

The second track is the latest single from Joseph Vincent called Bumble Bee. Show some support and purchase the song on iTunes. In the meantime, have a look at the video and embrace the retro theme!