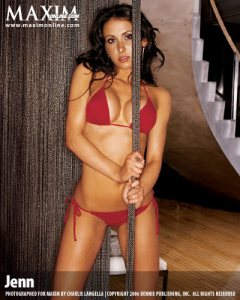 Not surprisingly, to kick off the second Favre-dump, here’s Jenn Sterger.

In case you needed a reminder of the back story of the whole Favre/Sterger/Favre Dong saga, here was the original story heard around the world from two months ago. (Deadspin)

And here are the pictures of Favre dong that has started Favre-mageddon. Naturally, this is NSFW because of the photos of Favre’s little gunsligner at the end of the video. (Deadspin)

Surprisingly, the media did actually ask Favre about the pictures this time. Little did he know about the double entendre he made at his own expense. (Kissing Suzy Kolber)

After the jump, more Favre fallout, the money side of the pics, and more on Sterger.

While the Favre photos pulled over a quarter-million page views since posting (when I last checked), Deadspin and Gawker won’t be making much money off this post because they can’t sell any ads. (All Things Digital)

If a lack of ads was bad enough for Deadspin, they also racked up their biggest ever expense bill to acquire the photos. (Business Insider)

Interestingly, the Vikings are playing the Jets this week. And it was a Jets PR that was an initial go between for Favre and Sterger. Coincidence or well-timed plan to distract. (Deadspin)

Now Deadspin may not be the only one that could lose out on cash thanks to the dong pics. Favre’s sponsors may not be too happy with this either. (Business Insider)

But so far, none of them seem to care. (Business Insider)

One of Favre’s biggest fans is Sports Illustrated writer Peter King. So how does he think Brett will fare this weekend? Well, he uses a line that would have been true before the dong photos were released but is even more hilarious now. (Sports Illustrated)

ESPN is pretending this whole dongslinger thing isn’t happening. Instead, they’re talking about his throwing elbow which may or may not be his slinging elbow. (ESPN)

And maybe we should mention one thing. We still don’t really know if that’s the real Dongslinger in those Deadspin photos. Have your say in this poll. (Huffington Post)

And now for the usual linkdump YouTuberry. First, it’s a song about the whole Favre/Sterger/Dong saga.