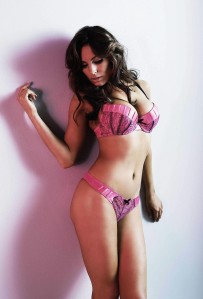 Happy Easter, my fellow heathens! I don’t discriminate so you can have any religious beliefs to enjoy today’s SLO. This post was written by an atheist after all. I wonder if Kelly Brook is an atheist.

Do you want to own a piece of television history? You can buy a royalty cheque sent to Don Mattingly for his work on The Simpsons. Just don’t plan on cashing it. (With Leather)

Coming soon to the Wii: NBA Jam. But it wasn’t always going to be that way. (Kotaku)

Before the regular season kicks off, maybe you should plan which baseball games you want to attend this season. A good planning method is going when all the great promotions are. (Fanhouse)

After the jump, March Madness links, Gordie Howe doesn’t care who you are, and the greatest NHL Playoff ad ever.

Looking for some gear to wear for tomorrow’s NCAA Final or the upcoming NBA Playoffs? Look no further. (Geek Chic Daily)

There are two recurring themes of this year’s March Madness. 1) People don’t want a 96-team tournament; and 2) People still want a college football playoff. But what if the exact opposite happened? What would happen if the BCS system came to basketball? (Rush The Court)

For all the crap we give guys like Bettman and Stern for rigging games, we know that it actually happens in European soccer. (BBC)

And in slightly related news, you can get some skin in the game for The Masters. You can bet on everything from who wins to where Tiger’s first tee shot will land. (CNBC)

A story about the hockey history of the Ford and Illitch families revealed an interesting anecdote. Gordie Howe will wreck anybody, even heirs to multi-billion-dollar empires. (New York Times)

Looking for an April Fools joke that was better than our CIS video game one? How about this one Rich Eisen pulled on Shawne Merriman. (Shutdown Corner)

A quick entertainment link for you. Neal McDonough was dropped from his new ABC series because he wouldn’t do a non-nude sex scene. He said something about religious and family values. I’m sure God and his family want him to come home without a paycheck as well. (Deadline)

As if things weren’t already bad enough for Erin Andrews (with the nude videos and all), now someone is sending threatening emails about her to The Dan Patrick Show. (Deadspin)

Today’s photo gallery is a look at the city of London (England) at night from a helicopter. Beautiful looking city all lit up. (Daily Telegraph)

This has to be the greatest NHL Playoff ad ever. Too bad it’s just a spoof. Gary would do a lot better by running this.

Every great Arnold quote you could ever want in a handy ten minutes dose… Okay, there’s a bit too much Mr. Freeze but nobody’s perfect.