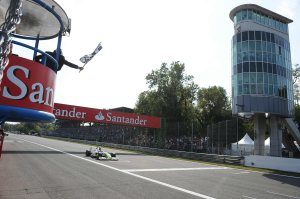 They may be at different teams than when they had their best years but Rubens Barrichello and Ross Brawn were winners again at Monza. Both were very successful at the historic Monza Circuit when they were with Ferrari. A few years after parting company with the Scuderia, they replayed the familiar scene of Ross on the pit wall guiding Rubens to the top step of the podium. The Brawn 1-2 allows everyone back at the factory to breathe easier after Red Bull had an atrocious day. Atrocious is also how we could describe the last couple of weeks for Renault, too.

This race had a fair amount of passing though not necessarily at the front. At the front, Hamilton led from pole and Raikkonen KERSed by Sutil for second. The Brawns rode around in fourth and fifth, making them the front runners of cars on a one-stop strategy. Hamilton got away quickly from the field but he wasn’t able to get the 26 second lead over the Brawns that he needed to hold the lead after his second pit stop. The Brawns were able to keep enough pace despite running their tires longer and being heavier than Hamilton for most of the race. As he did so often in the past, Ross Brawn was able to put together a brilliant strategy that his drivers could execute to perfection.

That’s not to say that the two-stop strategy was a bad idea. The three two-stop cars (Hamilton, Raikkonen, and Sutil) ran 3rd, 4th, and 5th behind the Brawns after all the strategy had played out. Therefore, two stops was quick but it wasn’t as quick as the Brawns were when adjusted for fuel. And all the light-weight running in the world can’t help you if you over cook it and put it into the barrier. That’s exactly what Lewis Hamilton did on the last lap in the first Lesmo corner. Whether he pushed too hard trying to catch Button for 2nd or lost concentration late in the running, I don’t know. I do know that it was a fairly hard shunt he had with the inside tire wall. But from the looks of it, he was worse off from being spun like a top when his tire hit the conveyor belt cover on the tire wall than from actually hitting the barrier.

As for the other two championship contenders, it was a day best forgotten. Mark Webber was spun out on the first lap by Robert Kubica and found himself beached. His title chances very well could be beached as well now that he’s 28.5 points behind Button with a maximum 40 points up for grabs. Sebastian Vettel finished eighth after running out of the points all day. The last lap Hamilton crash pushed Vettel into the point but he lost 7 points to Button and finds himself 26 points out of the lead. It looks like Barrichello is the only threat left to Button’s run at the title. He’s only 14 points back and has been making huge strides on the lead in the last few races. Ross Brawn says there will be no team orders except race each other clean. You would have to think that all the pressure rests on Button to hold off his more experienced teammate. Button has been collapsing under the pressure since the midpoint of the season just as Barrichello found his form.

Racing your teammates clean is something that the Toyota boys should learn. Jarno Trulli made a pass attempt on Kaz Nakajima heading into the first chicane. He was so shocked that he actually attempted an overtaking manoeuvre that he straight-lined the turn and fell back into the clutches of teammate Timo Glock. The pair raced side-by-side until they reached the first Lesmo turn when Trulli ran wide and into the gravel. Trulli went from 10th (when he was ahead of Nakajima for a split second) to 14th as a result. Normally I advocate hard racing but if it’s your teammate, get back in line and then try to pass him. It doesn’t do any good to run him off-road and make the guys at the factory do more work.

After the last round, I mentioned that Brawn was lining up sponsors for next season. Well, it turns out their relatively passive approach to finding sponsorship may have landed them a new investor. A rumour popped up last week that had Mercedes buying into Brawn. It is believed that Mercedes-Benz is looking to increase its footprint in F1 which would include this investment in Brawn and supplying upwards of four teams with engines. Interestingly, Mercedes was rumoured to be planning a full buy-out of Brawn early in the season while McLaren was struggling and in the midst of the Hamilton “lie-gate” scandal. The win at Hungary convinced Mercedes to stay on with McLaren though it appears the Mercedes and McLaren road car partnership is dead.

Rumours have Mercedes buying anywhere from 40% to 75% of Brawn through Aabar, a company from Abu Dhabi that owns 9.1% of Daimler. The German press suggest that the deal will be done by no later than 2011 so it’s not like anyone is in a rush to get this done. However, as Red Bull has shown, a company can own more than one team under the current rules.

Max Mosley either has a good sense of humour or he’s already plotting his revenge. British F1 journalists held a dinner for outgoing the FIA President on Friday night. Their going away gift for max was a £150 brown leather whip. Based on some of Mosley’s past escapades, I don’t think it’s intended for use on horses.

Even though today’s race was decided largely by strategy, at least there was some movement up front. With a ban on in-race refuelling starting in the 2010 season, we won’t see any movement as a result of strategy unless there is some great difference in tire performance. Instead, what is very likely to happen is that the good cars gravitate toward the front and the bad cars stay toward the back and never the twain shall meet. By good cars, I mean cars with good fuel mileage especially. The cars with the best mileage can run less fuel and in a sport where 10 kilos is worth 3-tenths of a second, that will decide a race. While no one wants poor strategy choices made by someone on the pit wall to decide a race, it is more interesting than a race decided on a computer screen the previous summer.

Previous to this past weekend, I though banning refuelling was a good idea. It would leave the action on-track rather than in the pits. However, I realized that action is still action. Drivers still have to work to make any strategy work. With refuelling banned, it comes down to who has the best equipment. If we’re lucky, a crowded track might mess things up in qualifying which would cause some passing as faster cars move back to the front. At the front, though, I think passing will be at an even greater premium.

I haven’t commented a whole lot on the Renault and Nelson Piquet crash affair that has consumed the F1 world. That’s because I think it’s a load of crap. No driver would willingly risk life and limb to help a teammate by deliberately crashing. Even if it was in a relatively low-speed crash, that doesn’t mean that something weird wouldn’t happen and Piquet gets injured. I don’t think that any self-respecting engineer or team principal would tell a driver to go out there and crash on purpose. If there was any truth to this, Piquet would have told someone before the race and the story would have spread like wildfire. Even if he was desperate to save his job, his first concern should have been his safety. I’d also like to point out that Piquet’s story came out conveniently after Piquet was turfed by Renault and started a war of words with team boss Flavio Briatore. I severely doubt there is any truth to Piquet’s accusations.

Just the same, Monday’s hearing about this incident will tarnish the sport’s reputation badly whether the accusations are true or not. The only way that F1 and Renault can escape this unscathed is if the FIA says that Nelson Piquet is a spiteful liar and there was no truth at all to his story. Unfortunately, I doubt that such a definitive verdict would be handed down. Every time that it looks like F1 is clawing its way back toward being taken seriously, someone does something that drags it back down. We’ve had Ferrari’s race fixing, McLaren’s spy-gate, Max Mosley’s Nazi-themed orgy with prostitutes, and now Renault’s crash-gate. It’s all so embarrassing for F1 fans.

On Thursday, I’m going to do my homage to NASCAR’s Chase for the Sprint Cup. Since Bernie Ecclestone is so insistent on changing the F1 points system, what if he followed the NASCAR model? I’ll tackle how it would be formatted in length and points structure. Purely a speculative effort but with Bernie in control of F1, it could be more like a prediction of the future.

The next round of the World Championship comes to us from under the bright lights of Singapore. Only Jaime Algersuari, Romain Grosjean, and Vitantonio Liuzzi have not run a night race before. Mind you, last year proved that you didn’t need night racing experience to run well though the streets of Singapore.

This year’s race will be a craps shoot based on the fact that last year’s race was messed up by the Nelson Piquet caused safety car and last year’s rules about pitting under the safety car. Based on the Valencia race, I would expect the McLarens to run well. I’m not sold on the Brawns because no sun beating down on the track will mean low track temperatures. The Brawns have trouble getting heat into their tires, especially on cold tracks, so the Red Bull drivers must pounce to close the points gap. They are essentially out of both championships but a maximum points result could get them back into the Constructors’ Title chase.