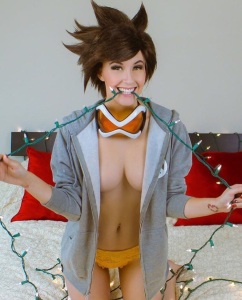 It’s the last link-off before Christmas and all through the blog… You know, I try this rhyme every year and it’s a pain in the arse to rhyme something with blog. Maybe I should try rhyming something with “Lowdown HQ.” That “u” sound rhymes with other words. Remind me to try that next year. It might be worth an effort.

Anyway, it’s Wednesday which means that we’re here for the links. Since Overwatch is on sale and it’s a definite lock for our top games of the year list, here’s Meg Turney cosplaying as Tracer.

The GOP have shut down the investigation into the Flint water crisis and blamed the EPA. Basically, they’re just trying to sweep a crisis that could replay itself nationwide under the rug. Congress in a microcosm. (Salon)

Kleptocracy: a government with corrupt rulers that use their power to exploit the people and natural resources of their own territory in order to extend their personal wealth and political power; what Newt Gingrich thinks Congress should functionally authorize by changing ethics laws so that PEOTUS can keep running his business. (Think Progress)

Is there a record for the quickest time from swearing-in to impeachment? There’s been a lot of talk about Trump and impeachment before he’s ever taken the oath of office. (Daily Intelligencer)

Congress is already learning lessons from the President-elect. New York City is asking for $35 million to cover the costs of protecting Trump. Congress is offering 20%. (The Hill)

And speaking of protection, Trump has his own private security and intelligence forces to protect him and will continue to use them. A private police force for a world leader. That doesn’t ring any bells, does it? (Salon)

Is income inequality a formal policy in the Trump plan? His cabinet is worth more than one-third of all American households combined. (Quartz)

Has anyone else noticed that Donald Trump covers his bullshit with crazy tweets? Of course you have. I’m sure everyone who isn’t a registered Republican has. (Cracked)

Speaking of which, Trump’s Twitter is actually causing the start of an international incident. (Bloomberg)

By the way, does anyone know the best burn unit in Washington? Michelle Obama had a good one at The Donald’s expense. (The Guardian)

One thought on “Wednesday Link-Off: Can’t It Just Be Christmas”