We’ve previously covered the Formula One video game franchise along with the fall and rise of Codemasters on the blog. Their most recent effort, Dirt Rally, showed that some of the greatness of classic Codemasters games still remained in Birmingham which was a much-needed revelation after the underwhelming F1 2015. Now that they’ve had time to work on the current-gen Formula One games, can F1 2016 live up to the expectations of gamers and F1 fans alike?

While last year’s F1 effort from Codemasters was very barebones, it feels like they’ve rebuild the game from the ground up for 2016. Last season’s game saw season mode, quick race, time trial and multiplayer. While the only game mode added for 2016 is Career Mode, it’s a very substantial addition to the game. 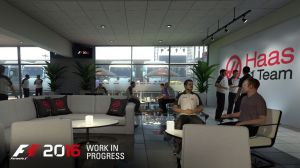 Career mode lets you create a driver (including selecting a face model, helmet with some customization and your own number [warning: all the good ones are taken but I’m happy-ish with #2]), select a team and embark on a ten-year career mode. During your career, you can move teams and/or improve your current team’s car. Unlike last year’s season mode where you picked a real-world driver and stuck it out for a season, there is instantly a lot more ownership over your racing this season. And, yes, you can carry your helmet and number over to multiplayer.

Unlike previous season modes which saw short weekends consist on one practice session, the new F1 rules and career mode’s upgrade system means that you’ll be running three practice sessions during the weekend. Over the course of the weekend, you’ll have three practice programs to run to earn research points. These points allow you to unlock upgrades to your car. The higher level the upgrade or the farther up the grid you start your career, the more the upgrades cost. For example, Manor will start at the back of the grid but it will cost the least in points to upgrade the car while it’s the opposite for Mercedes.

I found that the upgrade system and the ability to change difficulty between races was actually quite handy. At first, my Haas was absolutely dominated on Expert difficulty (except for one race that I’ll get to in a second) but spamming upgrades as quickly as possible allowed me to catch up to the front of the grid and I was challenging for top tens consistently by the time I got to Baku. The game leaves me the option of changing my career mode difficulty if I want but Hard was too easy, even prior to my upgrades, and Legend is about two-plus seconds a lap too quick for me. I like that you’re not locked into one difficulty setting from the start of career mode. It’s critical for tailoring the challenge on an ongoing basis.

The practice programs approximate real-world practice programs that F1 teams run. There is track acclimatization in which you drive through gates on the racing line to learn the track and measure you against expected pace for corners. While the gates aren’t actually there in real life, engineers would actually debrief drivers on their racing line and application of throttle and brakes to show them where they are gaining or losing time over the competition. There is a tire management test in which you are tasked with driving fast but minimizing tyre wear. In real life, they would measure tyre wear after a run to tailor strategy (and the game can still do that) but they’re trying to gamify tyre management to give you something to do. You also have a mock qualifying run program in which you see how the team believes your pace is compared to where you should be. 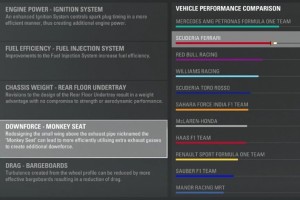 Running the practice programs can be a little tedious but I don’t particularly mind them. The track acclimatization is a nice primer on the track and lets you know where you are fast and slow. Mock qualifying is something that we’d all do anyway so it’s just free research points. Tyre management is quite tedious, especially using a controller. You feel like you’re crawling through the turns to save your tyres and even that is wearing down the tyres to barely within the optimal wear range. I often score maximum points for the other two practice programs but tyre management is a fight to get any. It’s a painful program but it is probably turning me into a better driver. Probably.

The new tyre allocation rules make an appearance in F1 2016. It’s not total control over the 10 selectable tyre sets as in real Formula One. Codies have given you the choice of a balanced, soft or hard selection of tyres. Balanced gives you more of the softest tyres as opposed to the FIA’s balanced default of three soft, three hard and four medium sets. Codies selects you two hard, three medium and five soft (with one more of each set as the mandatory sets from Pirelli) as balanced with one more hard or soft tyre at the expense of the opposite end of the spectrum if you go for harder or softer compounds. Unfortunately, there doesn’t seem to be a recommendation from the team as to the optimal compound selection.

With the new tyre rules, there are also real strategy options in order help you out in races. For example, I was struggling in China but I changed my strategy to stretch the stint on my hard tyres (I qualified 15th so I started on mediums) before making a late switch to supersofts and used everything they had to finish in the points. Similarly, I won the Russian Grand Prix by stretching the life of my tyres until rain started with a handful of laps to go. If I followed the team’s strategy, I would have made two stops (the first for slicks and the other for inters). I went straight from softs to inters and stormed through the field with two laps to go as the only one of the frontrunners (because I hadn’t pitted) not on slicks. The game will also tailor strategy based on your tyre management program. The game wanted me to run softs and supersofts in Australia as a default. My personalized strategy was mediums and softs because I was burning rubber. 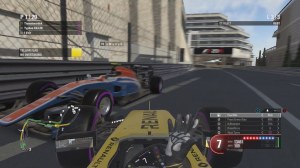 For every bit of attention and care that Codies put into their main single-player mode, it seems to have come at the expense of their multiplayer component. Granted, Codies changed the region restrictions on multiplayer with a patch because a Canadian like me could find no online races, even at launch. Now, I can find plenty during the weekend.

That doesn’t mean that the multiplayer works well. Lobbies are astronomically long as the countdown to a race resets to 60 seconds every time someone enters the lobby. In Mass Effect 3, when three-quarters of people readied up, it started a 20-second timer to the match. Because you’re looking at lobbies of one-fifth the size of F1 2016, there are lessons that can be learned. For example, 60-second ready timers in lobbies and 15 seconds to load setups when you’re on the grid make no sense. If it was the opposite, that would be fine but that would also mean that Codies would have to consider letting drivers have setup options available in online lobbies which they still don’t have.

The actual online racing is as broken as ever. Penalties are applied inconsistently. Never hope that someone ghosts in front of you because you’re never sure when it will happen. There are cars that will lag and teleport their way up the tracks rather than driving along the road (which is exacerbated by a lack of ghosting). You will often run into a multitude of errors in lobbies, especially with recent patches, that will cause a lobby to freeze trying to enter a race or after a race. I had a recent lobby that declared a winner before the lights went out so it was a one lap sprint to the line for 2nd. I was even temporarily suspended from online play because I corner cut too much in time trial. That was my theory since I was banned from online multiplayer before turning a wheel for cheating. Figure that one out.

If there’s one aspect of racing games that Codemasters is struggling with, it’s multiplayer. They’ve revised the online menus so you can see active sessions pretty much upfront which makes finding lobbies pretty easy. Codies has matchmaking for rookie (three laps, no contact), sprint (five laps) and endurance (25% distance) lobbies. However, the matchmaking lobbies and custom lobbies generally are for the shorter three and five-lap races. Maybe Codies should analyze this data and do as I recommended by going with sprint and featured lobbies. 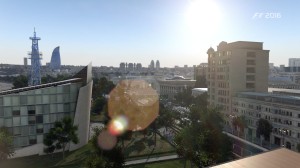 One quiet addition to the game is the Steam Workshop integration. From the looks of it, the workshop is just being used to share setups. I don’t mind having that help from the community to pick up the pace as they’ve figured out the tricks to this year’s game. The big change in terms of setup is that they have some variety other than wing levels like in previous years. The previous iterations of F1 required you to set things like suspension and ballast to the extreme of the setting range. Now, there is a little more playing around with the settings in the setups I’ve downloaded.

Other than what I’ve mentioned, the game has largely remained the same. I suppose there’s the addition of the Azerbaijan street circuit in Baku and a new time of day system that changes the angle of the sun and level of lighting to match various times of day but it’s not like you can run Monaco at night. You can run night races in the day since they will have practice sessions in daylight but you can’t run Melbourne under the lights though they often need the lights when the race ends in real life.

If you played last year’s game, you know how it looks already. The user interface has gotten an overhaul. I find that I can’t hit 60 FPS as easily this year as I did last which is slightly annoying but Codies has gotten better about patching the game. Sometimes it helps to improve the framerate. Other times, you get patches that reduce replays to 10 FPS. I’m not kidding. They made a patch that left the game in that state for weeks. It perfectly coincided with my career mode race in Monaco when I needed flashbacks the most.

F1 2016 is a massive step above what Codemasters released last year in their first current-gen effort. Not only did most of the content they had in F1 2014 return (with the noted exceptions of the Young Drivers Test tutorial and Season Challenge) but the career mode was given a complete overhaul to make it feel more like what we see and read about in real Formula One while still making it a fun game.

But Codies can’t seem to get out of its way when it comes to multiplayer and that holds them back from getting a better score. It would be nice if they could just come up with a stable and populated multiplayer component to the game but they just can’t with this generation of the EGO engine and F1 games. If they jettisoned multiplayer altogether, it wouldn’t be so bad because there wouldn’t be that major component of the game to mark them down on.

F1 2016 was reviewed on Windows PC but is also available on PlayStation 4 and Xbox One. Your impressions of the game may differ on platform played on, PC specs and how important that multiplayer is in the grand scheme of a racing game.