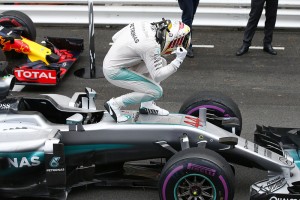 Twenty years ago, the Monaco Grand Prix featured a downpour, changing conditions and only three cars running at the end of the two-hour time limit. Sunday’s Monaco Grand Prix looked like it could go the same way but the difference was that 15 cars finished. A series of strange moments throughout the race saw Lewis Hamilton luck his way into his first win of the 2016 World Championship.

Daniel Ricciardo started on the pole for the race and looked like he could be in good shape for the race. If it started dry, he would have been starting on super softs rather than the ultra softs so he would have had plenty of options for strategy. Instead, the skies opened so everyone started on wets and behind the safety car.

There were numerous incidents early on. Jolyon Palmer almost instantly hit the wall on the pit straight when the Safety Car came in. Kimi Raikkonen hit the wall in the hairpin and almost took Felipe Massa and Romain Grosjean with him. Daniil Kvyat didn’t help his future employment prospects by divebombing Kevin Magnussen into Rascasse. As the track dried and the cars went onto slicks, we saw Max Verstappen go from 21st to the points but put his car in the wall by sliding onto the wet line. The highlight might have been Marcus Ericsson divebombing Felipe Nasr when the Brazilian wouldn’t heed team order to cede his position to the Swede. 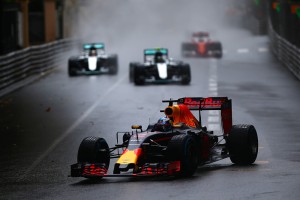 The real race developed when Mercedes ordered Rosberg to pull over for Hamilton. This unleashed the Brit but he didn’t make up a lot of time on Ricciardo though he left the rest of the field behind. As the track dried, Ricciardo made the switch to inters along with 21 other cars. Hamilton was the only one who did not.

Hamilton was much slower on the wets compared to the new inters but the nature of Monte Carlo meant that Dan couldn’t get by. Lewis’s plan was to go straight from wets to slicks which shouldn’t have worked given Ricciardo’s pace. Lewis got a one-lap undercut but he got by Ricciardo because the Red Bull team wasn’t ready for Daniel’s stop despite calling him in. The lengthy pit stop allowed Hamilton to just squeeze by into the lead.

The race wasn’t done there, though. Ricciardo was able to get his super-softs up to speed faster than Lewis’s ultra-softs. He made a move into the Nouvelle Chicane but Hamilton held him off by cutting part of it and then trying to put Ricciardo into the wall on the exit. Despite a blatant corner cut that gave him an advantage and a reactive defensive move, no penalty was given to Hamilton. As a result, Hamilton went on to win the race.

The win was Hamiton’s 2nd Monaco victory and his 44th career win which is only important because that’s his car number. Ricciardo finished in second which is his best finish of the season after four 4th places from the first five races. The podium was rounded out by Sergio Perez who made the early move to soft tyres and made the hardest tyres at the race meeting look like the ultra-softs by putting in fastest lap after fastest lap.

Sebastian Vettel came home in 4th behind Perez thanks in part to a later switch to slicks. Fernando Alonso quietly came home in 5th. The only time he ended up on-screen was when Rosberg failed to execute a pass into the chicane. The two Nicos battled on the final straight. With the rain coming down at the end, Rosberg once again completely lacked pace and fell behind Hulkenberg at the end for 6th and 7th. Carlos Sainz brought the Toro Rosso home in 8th. Jenson Button made it double points for McLaren with a 9th. Felipe Massa rounded out the points in 10th.

It’s an interesting development because the most recent reports suggested that Toro Rosso was close to sealing a deal with Honda. What hasn’t been disclosed is how the deal with STR came to be. McLaren’s Ron Dennis didn’t want Toro Rosso to get the Honda engine while we don’t know if Ferrari was willing to supply a current engine to STR for 2017.

Silly season looks to be well underway already and we’re barely a quarter of the way into the year.

Ted Kravitz suggested that the announcement of a multi-year extension with Force India is Sergio Perez’s future. He’ll stay paired up with Nico Hulkenberg for 2017.

As seems to be usual, there is a lot of interest over the second seat at Ferrari. Before the Spanish Grand Prix, Ferrari seemed to be trying to re-sign Raikkonen for 2017. After the weekend, rumours started that Rosberg was in talks with Ferrari for a move. Rosberg is out of contract after this season and appears to be coveted by both Mercedes, Ferrari and probably anyone else who can open up a seat for next season. After being drafted in for the Barcelona test, it’s believed that Pascal Wehrlein is the preferred option for that seat should it not be Rosberg’s.

The other team that you’ll have to keep an eye on is Williams. Both Massa and Valtteri Bottas are out of contract at the end of the season. It’s entirely possible that neither could be re-signed. At one point, Ferrari was keeping their eyes on Bottas to replace Raikkonen so they could be choosing between Rosberg, Raikkonen and Bottas. Nobody seems particularly interested in Massa at the moment so it very well could be Williams or sportscars for Massa.

The two rumoured replacements at Williams are Jenson Button and Daniil Kvyat. Button was reported to be considering a move to Williams for this season but it very well could be in the cards for 2017. Kvyat is looking for a move away from the Red Bull family after being demoted to Toro Rosso with a promotion unlikely. Kvyat’s teammate Carlos Sainz is trying to drum up interest from both Williams and Ferrari for next season. Lost in this is test driver Alex Lynn who is 3rd in the GP2 championship who might like a promotion to a race seat before long.

Over at McLaren, it won’t come as a surprise that Stoffel Vandoorne will be promoted to a race seat for 2017 replacing Button. Reportedly, Vandoorne was targeted by Renault who wanted to pair him with Esteban Ocon for 2017. With Vandoorne out of the market, we have to see if Palmer or Magnussen is retained for 2017 to partner Ocon.

There are a lot of parts of this sponsorship that are rumoured. Obviously, Heineken will have a major trackside sponsorship presence. They are also supposed to be putting together a Request For Proposal to have teams pitch sponsorship packages for Heineken. Rumours also suggest that Heineken are pushing for a Dutch Grand Prix in the near future. If they’re funding a good portion of the costs and sanctioning fees, it’s not outside the realm of possibilities.

Also worth noting is that Heineken is expected to lead the charge for Formula One to revamp its social media policy. While 2016 has actually brought a Formula One presence to YouTube other than copyright claims, Heineken reportedly wants to bring the lessons it learned from its EUFA Champions League sponsorship and apply it to Formula One. 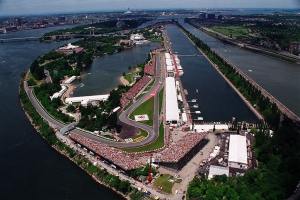 The next round of the 2016 Formula One World Championship is the first of three races in North America but the only one at this time of year. It’s a trip to Ile Notre-Dame and the Circuit Gilles Villeneuve for the Canadian Grand Prix.

Montreal is a track that is known to require quite a bit of power and brakes. That is both a good and bad thing for Mercedes. For every bit as good they are on the power, they tend to have troubles with the brakes. That being said, unless Ferrari or Red Bull are poised to pounce on a technical fault, it should be all Mercedes in Montreal.