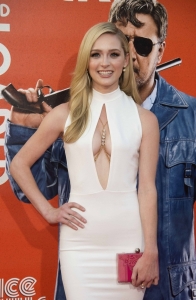 The weekend is here, so it’s time for the quick weekly fix of entertainment links. I’m sure most of you are still enamored with Captain America Civil War right now, so that’s probably why most of the big releases are holding back for now. Meanwhile in Australia, I already caught the release of Neighbours 2: Sorority Rising. It’s quite the funny flick despite the recycled premise. Anyway I’m looking forward to the release of The Nice Guys next week. At the premiere for the film, Greer Grammer just happened catch my attention, so let’s kick off the ELO with her this week.

Despite being pulled from the Phase 3 movie release schedule entirely, it seems like Marvel still wants to make the Inhumans movie. (io9)

Another Human Torch enters the MCU! Michael B Jordan has joined the cast of Black Panther. Speculate away as to who he’ll be playing! (Slashfilm)

And the cast for Black Panther is getting more and more impressive as Lupita N’yongo is set in talks to join the film as well. (THR)

Say if the circumstances of Captain America were real, he would have been owed a lot of money by the US Army upon getting unfrozen! (Tribunist)

Olivia Munn’s role as Psylocke almost didn’t happen because the one of Apocalypse’s Four Horsemen was intended for another character entirely. (Cinema Blend)

Bryan Singer comments on including Deadpool in the X-Men universe. (Variety)

Despite being yanked from FOX’s release schedule, a sequel to the disastrous Fantastic Four reboot could still happen with its cast intact as producer Simon Kinberg is keen to get the film made. (Den of Geek)

A bit of a setback for the Godzilla sequel as director Gareth Edwards has stepped down making the film. (Deadline)

For those that are still interested in Justice League, this is for you. Now there has been speculation about who the big bad in the movie will be but as it turns out, it might not be who you think it is. (Birth Movies Death)

I response to the white washing controversy in Hollywood, artist William Yu decided to photoshop actor John Cho into the big blockbuster movie posters. It makes a compelling case that we can turn him into a leading man in all these films. (US Weekly)

The rumours were true! Supergirl managed to get a second season but will be shifting homes to The CW instead. (The Wrap)

Despite Wentworth Miller exiting Legends of Tomorrow in the most recent episode, his contract status is quite interesting in terms of keeping him in the DC-Berlanti TV shows. (Collider)

First look at Assassin’s Creed. The cast is top notch and the visuals are stunning. Definitely something to look forward to in December despite the questionable use of a Kanye West song in the trailer.

The red band trailer for Swiss Army Man is out. The farting corpse movie starring Daniel Radcliffe and Paul Dano caused quite the buzz at Sundance. Either people walked out of the cinema in disgust or it simply wowed the audience. You can decide if the film is tastefully distasteful when it comes out next month.

If you didn’t think Stephen Lang could be scarier, then perhaps you should have a look at the trailer for Don’t Breathe.

Stephen Colbert has been stumped by a Lord of the Rings trivia question provided by Ryan Gosling’s mom! To be fair, it is a difficult question to answer given there are likely different editions of the book out there anyway, so there is unlikely one single correct answer.

While I continue to wait for a live-action series or movie for Voltron, this will have to do for now on Netflix. Check out the animated series Voltron: Legendary Defender.

Now that the Deadpool Blu Ray and DVD are out, it would be the perfect time for Honest Trailers to do a treatment of that film. As a bonus, Deadpool himself joins in on the fun to mock his own movie. How meta.

Music recommendations of this week are courtesy of The Lonely Island and the film Popstar: Never Stop Never Stopping. The first track is the catchy I’m So Humble.

The next track is Mona Lisa.

And finally Ryan Higa teams up with Phil from Wong Fu, JunCurryAhn, David Choi and Justin Chon to form a Kpop group.