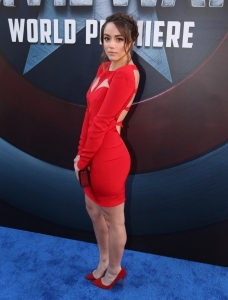 The highly anticipated weekend for the Game of Thrones premiere is finally here. Rather than pondering over Jon Snow’s fate, let’s just take some time and go through this week’s ELO shall we? Let’s kick things off with red hot Agents of SHIELD star Chloe Bennett at the premiere of Captain America: Civil War. Sometimes I wish I had given Agents of SHIELD a chance, but for some reason I never got past one season of the show.

After the jump, addressing the issue of whitewashing Asian roles, adjusting the Marvel Cinematic Universe a little bit, that delayed Alien flick is still happening, and Arya Stark visits a local hobby shop.

Yellowface is a bad look Hollywood. There have been a few recent cases to justify that whitewashing in Hollywood does not guarantee box office dollars (see Gods of Egypt, Aloha or Dragonball). So when will they learn to start having cultural ‘minorities’ as lead characters? Anyway, here’s an interesting take on how Asians are portrayed in mainstream media. (Vox)

Tilda Swinton addresses the controversy of whitewashing in the upcoming Doctor Strange movie. In this case, it would have been a damned if you do and damned if you don’t. If the producers went with an Asian for the Ancient One, it would have been considered type-casting. If they didn’t (which is the case now), then they’ll be accused of white washing. Just can’t win eh? (Den of Geek)

Perhaps the Marvel Cinematic Universe is further distancing itself from the TV landscape as Inhumans have been yanked from the release schedule and delayed indefinitely. It’s not looking good for the superhuman flick. (Deadline)

Meanwhile, the new Spider-Man solo flick is gaining steam and Iron Man is set to appear in it now! (Variety)

Times like these make me wish that I was back in Toronto. It is listed as one of the cities that will be host an exhibit of items collected in Guillermo del Toro’s Bleak House (a.k.a. his man cave). He is an avid collector with tons of rare memorabilia that is worth checking out. (Slashfilm)

Sigourney Weaver thinks Neill Blomkamp’s Alien flick is still going to happen and it will be ‘worth the wait’. (The Playlist)

Independence Day Resurgence will feature new aliens and will certainly open doors to more sequels in the future. It is not surprising to hear this considering that the initial idea was to shoot the Independence Day 2 and 3 back to back, but I suppose FOX wants to be a bit more cautious and see how the second flick will perform this June. (Fandango)

Looks like Zack Snyder’s vision for Robin (despite his untimely demise at the hands of The Joker it appears) was also a murderous psychopath of some sorts as revealed by his weapon of choice. (Digital Spy)

Normally actors like to sugarcoat the news of a possible movie sequel’s fate, but it was refreshing to see Emilia Clarke flat out deny the possibility of her returning to the Terminator universe. (Coming Soon)

It was another sad week in music with the news of Prince’s death. To soften the blow, perhaps it is time to look back at the hilarious sketches where Dave Chappelle portrayed the famous singer on his sketch show. In fact, it appears that Prince loved these sketches too! (THR)

A look at how HBO is getting right with regards to the character of Jon Snow. Alright AMC, you should take some notes. (Time)

10 predictions on what will happen in the upcoming season of Game of Thrones. (Forbes)

Now that it’s quite common to see TV characters get whacked upon the actors’ departures, perhaps it would not be the case in the upcoming NCIS finale? (THR)

A look at the top 10 fan favourite movies that totally deserve sequels. (Joblo)

It was the perfect to release the new trailer for Independence Day: Resurgence on Earth Day.

Jason Bourne is back and he is tearing up the Las Vegas strip.

The red band trailer for Mike and Dave Need Wedding Dates looks fun. Especially with Anna Kendrick and Aubrey Plaza teaming up to give the guys a run for their money.

Maisie Williams is once again showing how awesome she is by surprising some unsuspecting fans at a local hobby shop and goofing around with them.

Music recommendation of the week. Daniela Andrade’s cover of Bang Bang (My Baby Shot Me Down).