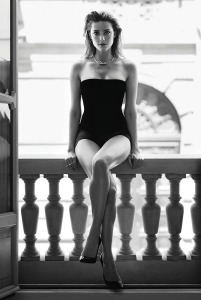 Spectre is finally out in Australia but reviews haven’t been as flattering as the previous installment. That being said, it’s probably still worth checking out in cinemas. Anyway it’s Saturday once again, so it’s time for the ELO. Didn’t really know how to kick off this entry but then I came across Amber Heard’s latest shoot with Marie Claire, and it certainly caught my attention.

After the jump, Star Wars is not trying to garner any movie awards this season, watch Shia LaBoeuf watch Shia LaBoeuf, check out Bond’s kill count, a potential good pitch for the next Die Hard movie, apparently The Martian is a comedy and stop trying to make Jai Courtney happen!

Bold move by Disney but in order to keep its secrecy for the upcoming Star Wars flick, the film will not be screened for awards considerations at all! (The Wrap)

If you had time to kill earlier this week, you would have time to watch Shia LaBoeuf watch his own movies in reverse chronological order. Ya that’s right. Just when you think he can’t think of any more random projects, here is one for you! His best reactions came from rewatching Even Stevens. (Film School Rejects)

Curious as to how many people James Bond has killed? Perhaps this will give you a better idea. (Gizmodo)

New posters for the new Zoolander film are out! It’s fitting that Zoolander and Hansel are getting in each other’s way as they try to take selfies. (Slashfilm)

Many filmgoers didn’t like the ending to Steve Jobs, but screenwriter Aaron Sorkin takes a moment to defend it and insists that he didn’t go soft. (The Film Stage)

AMC just can’t get enough of zombies as they pick up George Romero’s Empire of the Dead. (Bloody Disgusting)

Disney might be keen on revamping all its classics, but don’t expect to hear Robin Williams as the Genie in any upcoming Aladdin reboots. Why? Well something in his will is preventing the studio from using all the extra material that he has recorded back in the day. (NY Post)

Here are some interesting ideas that would make the next Die Hard sequel worth watching and Mark Millar adds to the pitch idea too. (Collider)

Here’s your WTF of the week. The Martian is classified as a comedy for the Golden Globes. Sure the movie had its funny moments but it’s hardly a comedy… (Slashfilm)

A look into an episode of Friends when Rachel was replaced by a stand-in and no one noticed for 10 years! (The Telegraph)

First look at Finding Dory as our forgetful heroine goes on an unforgettable adventure.

Last time Angels in the Outfield got the 30 for 30 treatment. This time, it is the fight between Rocky Balboa and Ivan Drago.

Seth Rogen, Joseph Gordon-Levitt and Anthony Mackie are up to more crazy fun in the new red band trailer for The Night Before.

They decided to scale up the action and the technological toys in the next film of the Divergent series, but is it still worth seeing after a fairly lackluster Insurgent? Have a look at Allegiant and see for yourself.

Oh you know the Candy Crush movie is bound to happen at some point, so let’s get the ball rolling with a bit of help from Liam Neeson and Stephen Colbert!

Get your drink on in the new trailer for Jessica Jones!

Given its rotten Tomatometer score, it is no surprise that Honest Trailers would have a blast roasting this film. I personally didn’t feel like this was the franchise’s worst entry, it certainly didn’t live up to expectations.