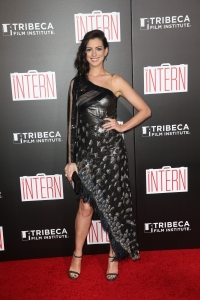 In theatres this weekend, you can catch The Intern, featuring Robert De Niro and Anne Hathaway. So far this looks like it could be a nice little charmer at the cinemas. So let’s kick off the ELO with the film’s leading lady as she looks mighty fine at the premiere recently.

After the jump, Hugh Jackman has someone in mind to take over the Wolverine role, Ridley Scott talks Prometheus, Fast and Furious stalled in pre-production, watch cats fight zombies, Pixar learns of many different ways to make you cry in their SadLab and Jeremy Lin shows you how to fit in the NBA.

Hugh Jackman thinks that Tom Hardy would make a suitable replacement for Wolverine after he retires the role. Now the question is, would Hardy accept being locked into multiple movies in a franchise? (MTV)

The A-Team reboot film didn’t quite work out, so FOX is looking into a TV show return instead. (Variety)

In a recent interview, Ridley Scott reveals the title of Prometheus 2. (HeyUGuys)

Speaking of Prometheus, if Ridley has his way, he will be making many more films in that franchise before finally linking to the Alien films. Hopefully you guys dig the first film, because I thought it was a let down. (Coming Soon)

While there are plans to continue the Fast and Furious franchise, it may seem like behind-the-scenes drama might be causing the next installment to be stuck in neutral. (THR)

Given that Terminator Genysis was a flop at the domestic box office in North America, hopes for a sequel seemed dead. Lately the international numbers have come in and seems like the franchise is still raking it in! (Cinema Blend)

JK Rowling details the history of Harry Potter, so you can learn more about the family and how they made their fortunes. (Pottermore)

The Men in Black are being reinvented as a new trilogy with or without Will Smith. It’s starting to look like it will be without its original star. (Joblo)

Just slightly differing views. Zack Snyder still believes Batman v Superman is a direct sequel to Man of Steel while star Henry Cavill doesn’t believe it to be a true sequel to the first flick. Story-wise perhaps. Character-wise perhaps not. Debate away! (Slashfilm)

A look into how Game of Thrones managed to win Best Drama Series at the latest Emmys despite its worst season to date. (Collider)

So this was essentially a promo for Syfy’s Z Nation, but it’s quite amusing to see cats fight off against zombies.

It has made the leap from your smart phone to the big screen. Catch the teaser trailer for Angry Birds.

In the new TV spot for Creed, it seems like Rocky isn’t doing too well. Would they be bold enough to kill off the iconic character to truly pass the torch?

Pixar undergoes rigorous tests to see what will make you cry the most in the SadLab.

Joseph Gordon-Levitt teams up with the Ragtime Gals for a barbershop quartet rendition of Bitch Better Have My Money.

Jeremy Lin and friends take a moment to show you how to fit in the NBA. Of course, Riley Curry steals the show at the end.