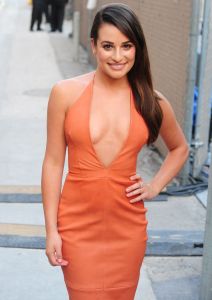 Sometimes, I wonder how there are whole websites and reporters dedicated to fact checking politicians but the frequency with which fact checking turns up errors, I’m surprised that I don’t try to get one of those gigs. You’d think that politicians would learn that everything they say would be under such close scrutiny that they couldn’t lie but what do I know.

Anyway, it’s Sunday which means that it’s time for us to do the links. With the new TV season kicking off last week through what feels like October, let’s kick this post off with Lea Michele.

I’m on the record as not believing in the efficacy of supply-side economics. Elizabeth Warren doesn’t either. (Salon)

Carly Fiorina is the latest Republican flavour of the month. However, her inability to recount facts might be her downfall. (Mother Jones)

In 2010, Fiorina ran for Senate. After the campaign ended, Fiorina’s campaign repaid all of her personal loans and left many staff and vendors high and dry. (The Daily Beast)

“People do not choose to be atheists; they realize they are.” (New York Times)

Alexion Pharmaceuticals is suing the Government of Canada for trying to limit the price of its $700,000 per year drug that treats two rare blood diseases. (CBC News)

Say all you want about the credibility of Patrick Kane’s accuser, that doesn’t change that the NHL’s response to off-ice issues is embarrassingly non-existent. (Anaheim Calling)

The big news in MMA this week is that the UFC may have let Vitor Belfort fight at UFC 152 knowing he failed a drugs test. (Deadspin)

For the baseball fans, it’s a conversation with Billy Beane and Bill James. (Wall Street Journal)

According to critics, M. Night Shyamalan’s The Visit is his best film in nearly 15 years. That doesn’t mean that he’s back. It’s just a blip in the downward trend of his career. (FiveThirtyEight)

Here’s something interesting for eSports fans. TBS will launch a televised Counter-Strike: Global Offensive league starting in 2016. I hope they have a plan for Twitch because they’re likely to get more viewers online than cable. (The Daily Dot)

In case you haven’t been checking up on OC Remix, their big Final Fantasy IX remix project has been released for download.

I’m fairly certain you’ve seen The Young Bucks superkick a kid but here are some other funny wrestling videos on that damned Comedy Central show.