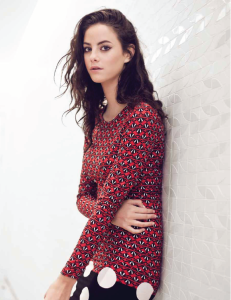 The Maze Runner: The Scorch Trials is in cinemas this weekend (at least in Australia anyway). The sequel is holding steady on the Tomatometer as we speak, so hopefully it’ll like up to the quality of the first flick. Let’s kick off the ELO with one of the stars from the flick Kaya Scoledario.

After the jump, a tease on Transformers 5, some smart movie marketing, Kong will face off against Godzilla, we’ve all been pronouncing Voldemort wrong and M. Night Shyamalan made one of the best comedies of 2008.

A look at the storyline for Transformers 5 and the possible return of the dinobots! (Movie Web)

Now that’s slick marketing right there. While the film Legend starring Tom Hardy is garnering plenty of good reviews, there are some detractors out there. However that does not stop the marketing from spinning it into something positive. (Slashfilm)

What was earlier reported as reshoots for The Force Awakens has now turned into rumblings for the start of shooting for Star Wars: Episode VIII in Ireland later this month. (Entertainment Weekly)

You know that Batman v Superman will not be a Man of Steel sequel when the director reveals that there will be a greater focus on the Dark Knight himself. (The Daily Beast)

Oh it’s happening. Be on the lookout for a showdown between Kong and Godzilla! (Collider)

The final film of the Divergent series is getting a name change. Could that possibly mean that the film franchise will… um… diverge from its source material? (MTV)

The plot of Suicide Squad is kept under wraps pretty well, but could this be the villain in the movie? (Heroic Hollywood)

There just might be a tease into Rogue One during the post credits for Star Wars Episode VII. (Schmoes Know)

You’re the Worst is the most accurate depiction of 21st century dating? (AV Club)

A look at the changing landscape of late night TV. (Vulture)

We got a premiere date. Mark you calendars for November 20th as Marvel’s Jessica Jones will be hitting your small screens on Netflix.

First look at the new season of The Flash. With these multiple worlds merging, things are getting a bit weird on the show. In a good way of course!

Turns out M. Night Shyamalan made one of the best comedies of 2008.

Wall-E gets left behind in the mash-up trailer with The Martian.

Anna Akana demonstrates how to handle a crush.