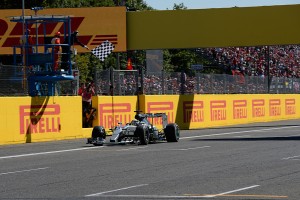 The Italian Grand Prix is one of the most prestigious and historic Grands Prix on the F1 calendar. While the current state of F1 made the winning manufacturer a foregone conclusion, the post-race drama gave a little intrigue to an otherwise less-than-thrilling Italian Grand Prix.

In the end, it was Lewis Hamilton who crossed the line first and then survived a stewards’ inquiry after the race to win the Italian Grand Prix.

The race didn’t start well for a number of runners. Kimi Raikkonen qualified in 2nd but stalled on the line. That immediately dropped him to last. Nico Rosberg started 4th but lost two spots thanks to his evasive maneuvers around the stricken Ferrari. The two Lotus cars didn’t last long. Each had contact in the first turn which resulted in a broken rear suspension for Romain Grosjean and a broken right-front suspension for Pastor Maldonado.

Rosberg was able to recover through some strategy, though. Mercedes pulled him in for the switch to prime tyres at the start of the one-stop pit window. This gave him the undercut on the two Williams and allowed him to breeze past them on pace.

The only problem was that Nico’s engine wasn’t quite on the same game plan as the driver and team. Mercedes had to replace Rosberg’s engine on Sunday after a hydraulic problem with the upgraded unit for Monza. The old spec unit just didn’t have the life in it and he had to retire the car with smoke and flames coming out the exhaust with three laps remaining.

The win was Hamilton’s eight of the season and extends his Drivers’ Championship lead over Rosberg to 53 points. The mathematicians have already crunched the numbers and said that all Lewis has to do is finish 2nd or better every race from now to the end of the season to win the Championship. Sebastian Vettel crossed the line in 2nd which gave him a podium in his Ferrari debut at Monza. Felipe Massa rounded out the podium to the delight of the tifosi who still consider him one of their own after his long stint at Ferrari and time as Michael Schumacher’s protegé.

Valtteri Bottas finished in 4th. Raikkonen recovered from his stall at the start of the race to make it to 5th at the end of the race. Sergio Perez continued the surprisingly good run of form he’s been having with a 6th. Nico Hulkenberg celebrated his new contract extension by coming home 7th. Red Bull couldn’t have been expected much from their Renault engines but the best they could manage was 8th with Daniel Ricciardo. Marcus Ericsson scored points for the third-straight race in 9th. And Daniil Kvyat was the big beneficiary of Rosberg’s retirement by getting the late promotion to 10th.

So the big story on Sunday was the FIA and Pirelli investigation into the supposedly under pressure Mercedes tyres. I say supposedly because while the tyres were below the minimum pressure requirements when measured, both Lewis and Nico were cleared of any penalties.

When Mercedes was called in front of the stewards after the race, the under-inflated tyre pressures was all the information we had. What actually happened was that Pirelli had taken their compliance measurements while the tyres were still in fully powered and maximum temperature tyre blankets. At the 110ºC, the tyres were at the correct pressures per Pirelli. After the blankets were unpowered, Bauer did his own personal check and found the Mercedes cars out of compliance.

So what was shaping up to be a championship reviving decision (as Rosberg’s gap to Hamilton would have dropped to 28 points) ended up being much ado about nothing. If anything, this gives us an idea of what the process is and maybe the FIA shouldn’t have a part in the measurements if they can’t do the measurements without screwing up.

It’s been a while since we’ve done a proper silly season update so I think it’s a good time to wedge one in. While it appears that we aren’t going to see any noteworthy moves this offseason (not all of them can be as exciting as last year), it’s still important to know what’s out there.

On Thursday, Williams confirmed that both Massa and Bottas would return as a unit for 2016. Bottas’ seat was the most in question as Ferrari had several million dollars on offer for the Finn’s services. Earlier last week, Force India announced that The Hulk would be back through 2017 with a newly signed two-year contract extension.

Since I missed a silly season update in the Belgian Grand Prix wrap-up, I neglected to mention that Raikkonen will be back for 2016 with Ferrari. And earlier than that, I should have mentioned that Sauber is retaining both Ericsson and Nasr for 2016 (likely along with their sponsors).

That means that there are two seats among the established teams who don’t have confirmed drivers. One is Carlos Sainz’s seat at Toro Rosso which I can’t see changing after one season. I don’t recall hearing any buzz about up and coming drivers from the Red Bull development program so I can’t see a rush to replace the Spaniard.

The remaining seat is Jenson Button’s at McLaren. Ted Kravitz hinted that the BBC will try to retain Button’s services as an analyst starting next season but that doesn’t necessarily mean that he needs to retire to do that. However, he is due a $5 million raise if his option for 2016 is taken up. With the team not having a title sponsor and expected to lose Diageo backing, they could do the second seat on the cheap and go with Kevin Magnussen or GP2 standout Stoffel Vandoorne.

The two Haas seats are also officially open. The American team’s relationship with Ferrari would make the appointment of Ferrari reserve driver Esteban Gutierrez a lock. Magnussen’s name recently cropped up as the other favourite for the seat but I’d imagine anyone with recent F1 experience will be considered.

The other bit of interesting off-track news has all to do with the engine situation on the grid.

On Sunday, it was reported that Red Bull was terminating its contract with Renault so they would have to find a new engine supplier for 2016. While it was reported back in June that Aston Martin was looking to facilitate a deal between RBR and Mercedes, the Mercedes board has already nixed any potential deal between the two F1 rivals.

That leaves Red Bull (and Toro Rosso) to sign a deal with Ferrari for 2016 onwards. The alternatives are to go back grovelling to Renault or hope Honda is willing to drop its McLaren exclusivity but none of those are appealing options for either party. For what it’s worth, Maurizio Arrivabene says that he has no problem supplying the Red Bull teams next year.

Interestingly, if Red Bull and Toro Rosso go to Ferrari and Lotus gets bought by Renault, that means that there could be a Mercedes engine deal available for Manor. While they are well behind this year, there’s a very good chance that they could vault McLaren in 2016. Who knows? Maybe things will go better for them with some money injected for development for next season.

Speaking of McLaren, the relationship between the Woking outfit and Honda are at what has been described as a “breaking point.” The belief is that the Honda engine is almost the sole reason for McLaren’s disappearance to the back of the pack. This weekend, Honda’s Chief Motorsport Officer, Yasuhisa Arai, was on the receiving end of an intense Q&A session from the assembled media and with more sponsors bailing on Macca and no hope of getting much money out of the prize pool, they need results or a lot of money from Honda to make this relationship tenable. 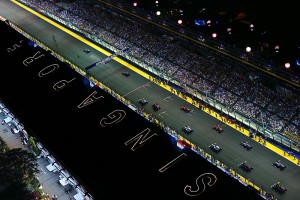 The next round of the 2015 Formula One World Championship takes us from the historic home of Formula One to one of its new homes. From Monza and the Italian Grand Prix, we go under the lights on the streets around Marina Bay for the Singapore Grand Prix.

As always, it’ll come down to the two Mercedes but you never know what could happen on race day. That being said, the three closest equivalent races are Monaco (a street race), Hungary (a low-grip circuit) and Bahrain (a night race that can be on a low-grip track). On each of these, Lewis well outperformed Nico though Nico did win in Monaco thanks to a bad pit call and the VSC to SC call. Given Lewis’ run of form, I’m reluctant to bet against him.