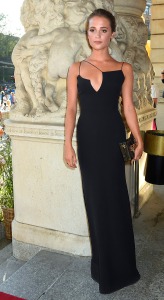 It’s reaching the tail end of summer, so you can definitely expect a slow down at the box office. The new release is the Zac Efron fronted coming-of-age story in We Are Your Friends. Reviews have been mixed, so proceed with caution. Perhaps it would be a safer bet to see something like… The Man From U.N.C.L.E. instead. Alicia Vikander seems to be the it girl lately with plenty of films along the pipeline in the coming year.

After the jump, a look at the two sides of Captain America: Civil War, Quentin Tarantino took apart It Follows, it’s been 15 years since Bring It On, Key and Peele explain how Gremlins 2 came about and movie villains love My So-Called Life!

A look at the 2 sides of Captain America: Civil War. So… is it a fair fight? (Collider)

Turns out Andrew Garfield has been pushing Sony to get Spider-Man into the Marvel Universe. Too bad he’s not invited along to the new flicks since I think he made a fine Peter Parker. (Joblo)

It Follows is a nifty little horror film that certainly took me by surprise at the Melbourne Film Festival last year. While it’s not perfect, it does hit the ‘creep’ factor very well. Turns out Quentin Tarantino had some quibbles with the film as he offers his ideas on how to fix the movie. (Vulture)

And of course, the director of It Follows took a brief moment to respond to QT’s critiques. (Slashfilm)

I can’t believe it’s been 15 years since Bring It On! I just… can’t… Anyway, the cast got together to reveal what they think would have happened to their characters 15 years down the road. (MTV)

If you’re up for a good laugh, allow Key and Peele explain to you how Gremlins 2 was created. (Bloody Disgusting)

While discussing about The Martian, Ridley Scott pretty much confirms his next movie is Prometheus 2. (Empire)

Watch this faux video essay and it will change the way you see The Dark Knight. (Yahoo)

Who needs a regular birthday cake when you can get a transforming Optimus Prime birthday cake! And the father of the year award goes to… (Gizmodo)

Turns out John Oliver’s bogus church Our Lady of Perpetual Exemption is raising money just like those bogus televangelists! It’s a success! (The Daily Beast)

All these shows are up for binge watching on streaming sites but why hasn’t The O.C. made the jump yet? (Complex)

Some 90s nostalgia for ya. Lisa Kudrow revives “Smelly Cat’ from Friends with a little help from Taylor Swift. (TV Line)

It’s time to tackle the most critically acclaimed actioner of this summer, so here’s the Honest Trailer for Mad Max: Fury Road. Yes, Tom was hardly in the movie.

Ever wonder what a G-rated Fight Club would be like? Wonder no more!

Joker shows up at the Villain Pub with a new look… much to the disappointment of all the other villains out there.