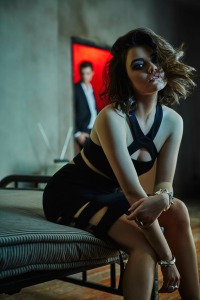 The Man from U.N.C.L.E. is in cinemas this weekend, so you can catch the Guy Ritchie directed spy actioner. So far, the buzz is generally positive. Anyway, gonna kick off the ELO with Lucy Hale. The season finale of Pretty Little Liars just aired. I never really got into the show, but perhaps I should reconsider…

After the jump, some tidbits on Heroes Reborn, a look at what went wrong for Fantastic Four, The Maze Runner is the underdog of YA films, Sesame Street is moving to HBO and catch District 9 in 8bit action.

Discussing about why certain original Heroes characters are not returning to Heroes Reborn. (Entertainment Weekly)

Also, could there be a possible season 2 to Heroes Reborn? (TV Line)

Ouch! Fantastic Four is going to be a $60 million write-off for FOX. (THR)

That being said, they’re still keen on making a sequel to Fantastic Four. So much on learning from past mistakes… (Hit Fix)

More news on what went wrong behind the scenes for the box office flop Fantastic Four. (THR)

Also you definitely know something is wrong with the clips from the trailers are missing in the final product. (Collider)

Watch Riley from Inside Out go on her first date and not surprisingly she’s not the one who is nervous. (Time)

Dylan O’Brien talks about The Maze Runner and how it is the underdog of YA films like Hunger Games or Divergent. (Slashfilm)

Watch out. The Rock and Zac Efron are teaming up for a Baywatch reboot. This time, you can expect a R-rated raunchy comedy though. (Vanity Fair)

You may laugh but this isn’t a joke. Dolph Lundgren is filming Kindergarten Cop 2. Yes, that’s right. They are are making a sequel to the 1990 flick that featured Ah-nold. (Manly Movie)

A small update on Shane Black’s Predator sequel. I guess the good news is that the film is still movie forward at this time. (Collider)

Reboots are the rage right now! So it’s probably not a surprise that they’re gonna make a new Fresh Prince of Bel-Air. (TV Line)

Despite the show’s cancellation, the character lives on! Constantine is set to join Arrow on a one off episode in season 4. That being said, there’s always a chance he could pop up on the Flash and Legends of Tomorrow! (Comic Book)

The CW is the new home of a potential Friday the 13th television series. This little network is really starting to build a name for itself. (Deadline)

Assessing the damage of what was once a promising HBO series. A look at what went wrong for True Detective in season 2 despite a stellar cast. (Vulture)

Aww alert! The body doubles for Daario and Daenerys on Game of Thrones are actually dating! (Mashable)

This is not a joke. There’s actually a Ned Flanders themed metal band out there called Okilly Dokilly. (Rip It Up)

Introducing the women of Spectre in this nifty little featurette.

While this movie isn’t exactly groundbreaking, I gotta say Sleeping With Other People is a fun romantic comedy. I caught the film while at the Melbourne International Film Festival and I’ll certainly catch it again if a movie date opportunity presents itself. Anyway, catch the red band trailer for the film starring Jason Sudeikis and Alison Brie.

Watching District 9 in all its 8-bit glory!