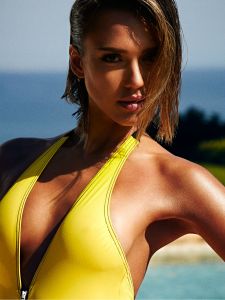 This is going to be a fairly quick set of the Sunday links as we’re gearing up for E3 2015. This year’s edition of E3 will have seven on-site press conferences along with Nintendo’s video conference. In addition to the usual five (EA, Ubi, Microsoft, Sony and Nintendo), there will be appearances by Bethesda and Square Enix along with a Tuesday night show focusing on just PC games for some reason. We’ll have coverage all week.

Anyway, it’s time for the links. Since she once appeared at the Video Game Awards, let’s start with Jessica Alba.

There’s a federal election this fall but don’t tell Justin Trudeau. His Liberals are slumping this year. (CBC)

Gawker and Hulk Hogan are set to square off in a $100 million battle over the newsworthiness of Hogan’s sex tape. It’s not about smut but freedom of the press. (Fortune)

Benny Johnson is back writing on the internet after being outed as a plagiarist. His comeback profile in the Washington Post was written by a friend of his. (Gawker)

Often, male athletes are often criticized for their off-the-field transgressions. American soccer goalkeeper Hope Solo has escaped similar scrutiny for hers. (The Cauldron)

On Wednesday, I mentioned the failure of a FIFA movie. Well, it turns out most of the people who went to see the movie were reporters looking to do stories. (Vice Sports)

Tonight’s iteration of the ongoing feud between John Cena and Kevin Owens (né Steen) continues the WWF’s popular us vs. them booking. (The Masked Man)

If you’re a racing fan, you’ve heard of the Delta Wing project. It was designed to have half the power and weight of current cars but run the same speed. Nissan came on board but abandoned the project and their financial obligations to do their own LMP1 project this year. Now, the Delta Wing is subject to a lawsuit. (Black Flag)

Twenty years later, here’s a look back at Who Shot Mr. Burns. (The AV Club)