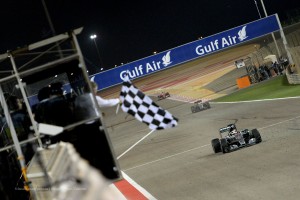 While Ferrari is back in contention this season, the battle that fans are focusing on isn’t silver vs. red. The big battle is between Hamilton vs. Rosberg. Having missed out on pole and finish behind Hamilton in each race, the Bahrain Grand Prix could have been the turning point for Nico’s season. Either he could turn it around and prove himself a contender or he would fall out of the hunt before returning to Europe.

While there were some promising moments during the race, Rosberg once again collapsed under the pressure. Even before his big mistake, he was never going to win. The winner was, once again, Lewis Hamilton.

From the lights, the battle was on. Rosberg tried making a pass on Sebastian Vettel but ended up falling victim to an opportunistic Kimi Raikkonen. Rosberg didn’t give up on the race, though. He was able to use DRS and late braking to park himself on the inside of Turn 1 to get by Raikkonen and later Vettel to climb up to 2nd.

While Hamilton was never challenged for the win, Rosberg had some good battles with Vettel that ended when the Ferrari driver suffered a broken front wing that required a change. There was some argument whether he ran wide in the last turn of the track because of the wing or if the wing broke after running wide.

Unfortunately, Rosberg’s brakes allegedly couldn’t keep up with his nerve. In the final few laps, Raikkonen made a late charge to catch Rosberg. On the second-to-last lap, Rosberg ran long in Turn 1 which allowed Raikkonen through for 2nd. He and the the team insisted that he had a brake problem. Hamilton also reported a brake problem that would have likely cost him the race if the Grand Prix was two laps longer but he held on for victory. 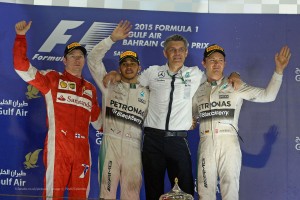 The win was Hamilton’s third win from four starts this season. Kimi Raikkonen broke up the podium party from the first three races. Without Vettel on the podium, F1’s elder statesman was the new guy on the podium. Rounding out the podium was Rosberg who is now 27 points behind Hamilton in the World Drivers’ Championship.

Valtteri Bottas was the big beneficiary of Vettel’s disintegrating front wing with a 4th place finish. Vettel came home in 5th which is his worst Ferrari finish. That’s kind of amazing when you put it that way. Daniel Ricciardo converted an unexpectedly strong qualifying into 6th. Romain Grosjean finished 7th for the second-straight race. While his teammate couldn’t put the race together, Sergio Perez finished up 3 spots from where he started for an 8th. Daniil Kvyat didn’t make it out of Q1 but somehow was able to score a 9th. Rounding out the points was Felipe Massa who had a more impressive recovery from pit lane to 10th.

Discussions are already underway to determine the future formula for the cars heading towards 2017. Bernie has been the biggest critic of the current formula and has been looking for a change to improve the show and has a plan in motion. 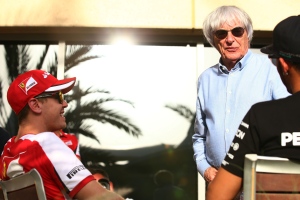 Bernie’s current push is for 1,000 hp engines. His thinking is that regardless of whether they’re the current turbo V6 engines or a return to the old 2.4L naturally aspirated V8s, they’ll be louder and harder to drive. The current engine formula is believed to be around 750 hp when combining peak ICE (internal combustion engine) and ERS (energy recovery system) output. That would match the same output as the previous V8 generation of engines without KERS.

Mercedes boss Toto Wolff says that all four engine manufacturers wanted to retain the hybrid engine setup so it looks like the V6s are going to stay. He also said that the real way to get more power out of the ICE is to increase the fuel flow which does fly in the face of the current 100 kg max fuel eco-ized fuel rules.

Perhaps the most interesting thing to come out of this weekend’s discussions was something Bernie said. The F1 Supremo said that the engine suppliers “need to supply [engines] at a price that the teams can afford to pay.” That is something that I never thought I’d hear Bernie say, especially since everyone seems to think he has it out for the minnows of the grid. 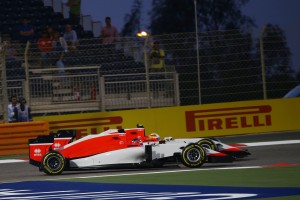 Speaking of cost concerns both Manor and Force India have given update on their planned updates to their cars.

At Force India, their late start to manufacturing and development left them just making it to the final preseason test. They’re just trying to make it by to their major update. The original plan was to have an update ready for Monaco. Now, FI says that their B-spec car won’t be ready until Austria at the end of June.

Meanwhile, at Manor, they’ve set a target of the August break to complete their 2015 chassis. Or should we call it the 2015 B-spec chassis? Considering how much Bernie wants ride of them, if they can that point, it’ll be nothing short of a miracle.

I often criticize TSN’s coverage of F1 but they spent a couple of bucks this weekend. Following their Sunday Premiere League football broadcast, they filled the 25 minutes before the race with the BBC’s pre-race show. Unlike the usual practice of using the world feed with the BBC/FOM audio, it was actually the video from the BBC complete with the grid walk and video packages.

Of course, there was a little hitch switching off BBC to the world feed. When the F1 logo aired five minutes before the formation lap, TSN went black for about four or five seconds when switching off BBC video to FOM video.

Well, it might not have been a smooth experiment but at least it was a damn sight better than usual. Hopefully they consider more pre-race and post-race coverage in the future. They aren’t spending the money on hockey anymore.

The next round of the 2015 Formula One World Championship is three weeks from now. With the first flyaway portion of the season completed, it’s a return to Europe for the summer starting with the Spanish Grand Prix at the Circuit de Catalunya.

With three wins from four starts, you have to like Lewis Hamilton’s chances to win once again. He can’t keep winning forever but Nico Rosberg hasn’t really showed the mental strength to challenge Hamilton for a win. Raikkonen wasn’t even in DRS range but pushed Nico into a mistake. Maybe Vettel can challenge for a win given he has a previous win in Spain. He just needs fortune to favour him.