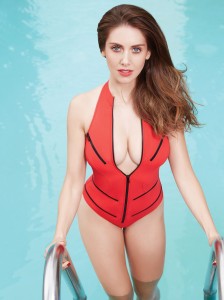 So the old saying goes that if March comes in like a lion, it goes out like a lamb. Well, last evening, I snowblowed about eight inches of snow. I don’t know how much fell overnight or how much I shoveled out of the end of the driveway this morning because I’m writing this Tuesday night. So I’m hoping the old adage holds true because I’ve had enough of winter at this point.

Anyway, it’s Wednesday which means that it’s time for us to do the links. Let’s kick things off with Alison Brie from her GQ Mexico shoot.

The daughter of the BTK serial killer is the focus of a long article about her coming to terms with finding out her father was a murderer. (The Wichita Eagle)

Israeli Prime Minister Benjamin Netanyahu made a speech to a joint session of the US Congress yesterday. Israel is likely to be a hot topic in the upcoming Presidential election. So that’s why Rand Paul is backtracking on wanting to cut foreign aid to Israel. (BuzzFeed)

A man talks about living with his feminist partner. Just because she’s a feminist doesn’t mean she’s a terrible person. That’s an unpopular opinion on the internet but he’s right. (Huffington Post)

Did you know that the way you use punctuation can reveal things about you? Maybe you should learn to use it correctly. (New York Times)

Local celebrity and Leafs Assistant GM Kyle Dubas explains how he uses analytics, both with the Soo Greyhounds and now with the Make Believes. (The Globe and Mail)

March Madness starts in a couple of weeks. I hope you weren’t planning on getting a perfect bracket. The odds of that happening are in the one in a few quintillion range. (Science Daily)

You may not have heard of Transcona, Manitoba, but wrestling fans know its most famous son. That would be the IWGP Junior Heavyweight Champion and Bullet Club member “The Cleaner” Kenny Omega. (Winnipeg Free Press)

I don’t think we can objectively say that music is getting worse nowadays but science can definitely show that music has evolved over time. (Medium)

House of Cards is back for its third season. It’s shifting away from the political idealism of its early days and is going full drama now. (Bloomberg)

So while America is focusing on lying newsmen, tax cuts, foreign threats that won’t affect them and more, the country is falling apart. America is currently on the verge of an infrastructure crisis.