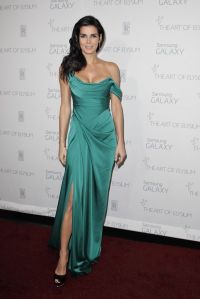 You know what the hardest part of doing my semi-weekly linkdump is? Coming up with unique titles that summarize the general theme of the links without being overly specific and time-sensitive. It’s harder than it looks when you’ve been doing two linkdumps a week for 6+ years while trying not to repeat titles.

Anyway, it’s time for the links. Let’s go a little off the board and start this post with Angie Harmon.

You either love or hate President Obama. That very well could change when he leave office. (The Atlantic)

The Academy Award nominations were announced earlier this week. The problem is that the Academy hasn’t gotten any better with recognizing anyone who isn’t white. (Al Jazeera America)

MP Sana Hassainia was present for 16 of 269 votes in the House of Commons last year. She says that’s because she had her second child in 2014. But given her job (and not insubstantial pay) is it alright that she missed that much of her job? (National Post)

December is usually a pretty good time for job numbers. Canada saw 54,000 new jobs added during the month and the governing Conservatives will be championing those numbers. They may not mention the 58,000 lost in the same month for a net loss of 4,000 jobs. (Rabble)

And just to give the Conservatives something more, here’s a loving profile of Prime Minister Harper. (iPolitics)

There’s a book about a boy who says he came back from heaven. Too bad that it was completely fabricated and pulled from shelves as a result. I don’t say “duh” often but it would be appropriate here. (Washington Post)

NHLer Jack Johnson might be making millions of dollars but he’s millions of debt. It wasn’t his bad decisions that left him in dire financial straits. It was his parents’ doing. (Deadspin)

New Jersey’s Izod Centre is going to close at the end of the month. A number of events are going to have to move as a result. (North Jersey)

The former Gawker golden boy Neetzan Zimmerman is out at Whisper after the company’s claims of being anonymous were exposed as false. (Capital New York)

Top Gear is back next week. They’ve done a little Lego trailer to get you hyped for the new season.

Regular readers know that I’m something of a mid-90s WCW fan (sort of post Bash at the Beach ’96 to Bret’s concussion at Starrcade ’99). One of my favourites was/is Scott Steiner. He was so intimidating that no one wanted to deal with him when he cut a shoot promo on Ric Flair during an episode of Nitro in 2000.