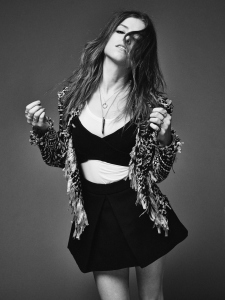 It’s Saturday once again, so it’s time for another edition of the Entertainment Link-Off. It’s been a busy week with plenty of big announcements. Anyway, the awards season is well underway and there are plenty of great flicks to check out in cinemas. Let’s start off with Anna Kendrick today. You can catch her in the flick Into the Woods, which is quite good by the way.

After the jump, a look at some Oscar surprises and snubs this year, George Lucas knows nothing about The Force Awakens, Seth Rogen has great taste in movies, Chuck Bartowski returns to TV, The CW is doing pretty well and let’s calculate your chances of finding a soulmate!

Oscar nominations were announced earlier this week. Here’s a look at the snubs and surprises from this year. (Slashfilm)

George Lucas is surely keeping his distance from the Star Wars franchise. He hasn’t seen the footage from Episode 7 and plans to enjoy the film as a fan. (Screen Rant)

Seth Rogen shares his inspirations for the Preacher series and let’s say that he has pretty good taste! I especially like his inclusion of Friday Night Lights and Short Term 12. (io9)

Chuck fans rejoice! Zachary Levi will be reappearing on network TV. This time he’ll be headlining another NBC project that goes by the name of… oh I dunno… Heroes Reborn! (TV Line)

While discussing about his new film Ex-Machina, Alex Garland reveals that Danny Boyle has some ideas with regards to the highly anticipated but not yet made sequel 28 Months Later. (IGN)

Bad news. Tom Hardy has dropped out of Suicide Squad. On the bright side, Jake Gyllenhaal is on tap to replace him. (The Wrap)

Looks like that Jump Street/Men in Black crossover is still possible! (MTV)

Looks like Showtime has an idea to do a spinoff on Dexter about Dexter. Umm what? (AV Club)

If you were looking for The Simpsons movie sequel, you may have already seen it without even knowing it! (Entertainment Weekly)

The CW is on a roll! Not only did it renew its entire fall lineup, it is also the only broadcast network to take home a Golden Globe! (Ad Week)

Watch a video timeline of all the X-Men characters. If you’re not too familiar with the comic lore, then spoilers beware!

The new Avengers: Age of Ultron trailer is a bit darker but it does show us a better glimpse of the Iron Man/Hulk battle.

So the song Hero by Family of the Year has been out and actually charted prior to Boyhood’s release. Thanks to being attached to the film and the trailer, it is experiencing a bit of a resurgence. Here’s a new music video which acts as a nice recap of the film without having to sit through 3 hours to watch the movie again.

Taken 3 may have recently hit the theatres just recently, but given the massive box office numbers, Taken 4 is on its way… all thanks to Jimmy Kimmel.

I love these honest trailers. This time they tackle Gone Girl.

The new gameplay trailer for Mortal Kombat X looks pretty awesome. It certainly helps that it also introduces fan favourite Kitana in the game as well.

Here’s a neat little short that discusses about the odds of finding your soulmate.

The second episode of the webseries David starring Youtube musician David Choi is out!