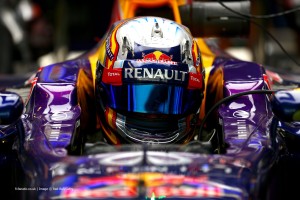 There were a few storylines to follow during the first day of the post-season test. Carlos Sainz Jr. was trying to cement his place in the Red Bull F1 family with a good performance in this test. Will Stevens and Max Verstappen were trying to get as many laps in as they could with their 2015 teams (assuming Caterham is still around and wants Stevens).

However, at the front of the field, it was still all about Mercedes. Williams’ Valtteri Bottas let the way by nearly half-a-second over Kimi Raikkonen’s Ferrari but all three Mercedes-powered cars were in the top four of the timesheets. This year’s fourth Mercedes team, McLaren, was trying out their new Honda engines while next year’s fourth Mercedes team, Lotus were sticking with the Renaults for one last run.

And about that new Honda engine. McLaren had converted one of their 2014 cars to be able to fit and run the new Honda engine but they didn’t get a lot of running in. A lot of learning had to be done by McLaren during this test and the team said they didn’t really anticipate putting any mileage in, hence test driver Stoffel Vandoorne’s participation in the test rather than one of the race drivers.

With most of the race drivers already on vacation, it was a battle of reserve drivers up front with Mercedes’ Pascal Wehrlein, a DTM driver by day, topping the time sheets.

The day was also notable for Force India giving the “info wing” a test run. That’s a small wing for on top of the air intake that displays the driver’s position among other info. It didn’t look like the display worked quite so well in the bright sunlight of Abu Dhabi as it made it hard to read the position number on the side of the wing. Perhaps a little more work needs to be done.