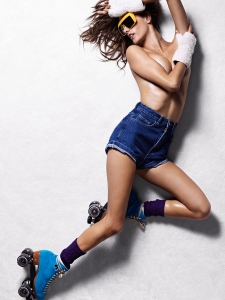 So I thought I was getting over that little flu or whatever I had this weekend and I started Monday by eating half a piece of toast and losing my breakfast. I think that actually helped me get better because it’s been steady improvement since then. If only the winter weather was so cooperative.

Anyway, it’s Wednesday and I’m under the weather so it’s time for some abbreviated links. Here’s Alessandra Ambrosio.

Bill Cosby was recently accused of sexual assault. Interviews with him are getting awkward now. (NPR)

Are the Republicans using Twitter to get around muddy election laws? (CNN)

And the Republicans are looking to change the electoral college in order to swing as many votes to the GOP’s side. (Think Progress)

Brisbane, Australia, spent $500 million less on security for the G20 summit than Toronto did. Their security budget was the same that was given to just the Toronto Police in 2010. (Vice)

How does a top American hacker get caught by the FBI? By making a stupidly easy computer password. (Daily Telegraph)

Hacktivist group Anonymous has turned their new attention to a new target. Anonymous is going after the KKK after they threatened lethal force to breakup the Ferguson protests. (Huffington Post)

When I was in university, it was a competition among people to get the most Facebook friends. Times have changed since then. For girls now, it’s all about Instagram popularity. (Time)

A Canadian woman gave birth to a baby girl while on vacation in the US. It only cost her nearly a million dollars as a result. (CTV News)

Just because Qatar was awarded the 2022 World Cup and is preparing for it under extremely controversial circumstances, that didn’t stop it from winning the rights to host the 2019 World Athletic Championships. What is wrong with these major sports organizations? (The Guardian)

GQ named Chris Pratt their man of the year. It’s about time that they got something right. (GQ)

Who wants some German rap about Twitch chat from a StarCraft II tournament? And why am I leading into everything in the form of a question today?