For the first time in 100 years, Russia held a Grand Prix motor race and for the first time, it was Formula One racing in Russia. And while the Bond film might be called From Russia With Love, there is no love lost between the two chief protagonists in the 2014 F1 World Drivers’ Championship. The fierce rivalry between the two led to a spectacular first corner confrontation that was the race’s only memorable moment as Lewis Hamilton held his nerve and picked up the win in Russia.

Despite the lack of action during the race, the opening lap was good for the highlight reel. Cars ran two, three and four wide down the wide straights on Lap One with drivers jockeying for position.

The biggest battle happened right at the head of the field. Hamilton led away from the lights after scoring pole on Saturday. He held the lead through Turn One but teammate Nico Rosberg used the slipstream to get by heading into Turn 2. However, with the entire race seemingly on the line in the first turn, the pressure got to Nico and he locked his brakes, overshot the turn and was forced to concede the position to Lewis.

The lockup gave Rosberg flat sports so bad that he had to pit for new tyres at the end of Lap One to deal with the vibrations. While that would ruin most drivers’ days, a combination of fresh rubber and raw pace allowed Rosberg to move up the field as other cars pitted for their one pit stop. Rosberg went 52 laps on his set of prime tyres to only lose seven points in the championship chase.

Apart from that, there wasn’t too much to this race. While the race had a few moments of action, all the passes seemed quite easy thanks to DRS and that also made it feel like there weren’t any real chases for position. Part of that might have been typical Tilke but it seemed as though most teams were tight on fuel because they were expecting a safety car so there was a lot of stretching fuel to get to the end. 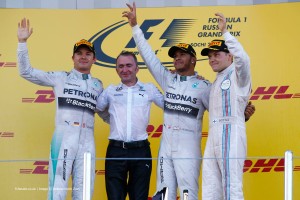 The win was Hamilton’s 9th of the season and the 31st of his career. The result puts him level with Nigel Mansell as the winningest British driver in F1 history. His win also clinched the World Constructors’ Championship for Mercedes. Teammate Rosberg finished in 2nd after the aforementioned change in strategy on Lap 1. Valtteri Bottas held his spot from qualifying to finish in 3rd.

The two McLaren boys rounded out the top five as both took advantage of Mercedes power and looked to cling onto a drive for 2015 with Button leading Magnussen home. Fernando Alonso crossed the line in 6th. Daniel Ricciardo led home Sebastian Vettel with the pair finishing 7th and 8th, respectively. Kimi Raikkonen came home 9th. And Sergio Perez rounded out the points paying positions in 10th.

While it’s still early days since the Jules Bianchi crash, Formula One isn’t waiting too long before implementing changes to safety procedures for sectors under double-waved yellows.

Charlie Whiting discussed the possibility of introducing what has been termed a “virtual safety car” under double-waved yellow conditions. The plan would mimic the current safety car delta times but would give a minimum time for a marshal sector covered by double-yellows rather than the whole track. Drivers would be required to drive a sector no faster than an indicated time. Presumably, there would be a five-second penalty for exceeding the speed limit.

The virtual safety car concept is similar to the Code 60 rule in sports cars. In WEC races, zones of the track are covered under a purple Code 60 flag which means that drivers must pass through that area on the 60 km/h pit lane speed limiter. It allows marshals to work safely without having to deploy a safety car.

While some have advocated for a Code 60 style of system, the problem is that you would have drivers racing to the sector start line before slamming on the brakes to lose the least amount of time getting down to the speed limit. While the minimum delta time leaves a little room for variance in speed, it does leave room for being slow and safe without putting the drivers in too much danger when slowing down for the yellow-flag zone.

So it’s been all of a week and we’re already seeing changes in rumours for next season’s grid.

All of a sudden, everyone’s cooled on the Alonso to McLaren rumours. Despite the fact that everyone involved is F1 thought that it was a done deal last week, now, people are hedging. Even Alonso said that he hasn’t signed a deal for 2015.

The rumours suggest that Alonso has three possible destinations in the immediate future. The McLaren option is still there but some are now suggesting that Mercedes is also a destination for Fernando. Presumably, a trip to Mercedes is dependent on Hamilton jumping to McLaren which would open up that seat. If Hamilton plays out his contract at Merc, that leaves Alonso without a ride for 2015. Apparently, a stopover at Lotus would bridge the gap which would leave Grosjean as the odd man out.

I doubt that the plan has changed any from last week’s rumour. I can’t see Alonso asking for a release from Ferrari without a backup plan at the ready. I’m sure Ferrari wouldn’t have had a problem telling Kimi that he should pack it in to get an Alonso and Vettel line-up. It’s a lovely dramatic storyline but I don’t see things changing.

The most important F1 story of the week is like that the in-season engine development freeze could return next season. The F1 Strategy Group approved it in a 15-3 vote. The three opposing teams were Mercedes, Williams and Lotus who will all have Mercedes engines next season. The rules change still has to be approved by the F1 Commission by unanimous vote before being elevated to the World Motor Sport Council for official inclusion in the technical regulations for 2014. 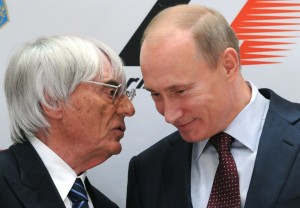 Love him or hate him, Vlad Putin was the subject of one of the funnier stories of the weekend.

Sky’s Ted Kravitz reported one of the more politically interesting stories of the week. Near the paddock entrance, there are some VIP parking spots. On Friday, the President of Russia had the closest spot to the paddock. Somewhere between the end of running on Friday and the same time on Saturday, Vlad was moved to P2 in the parking lot with Bernie getting the best parking spot. Say what you will about Vlad, in F1, he’s still second to Bernie.

Ted also noted that there was a conspiracy theory behind Daniil Kvyat’s P5 in qualifying on Saturday. He certainly couldn’t back up his quali pace on Sunday and ended the race in 14th.

The next round of the 2014 Formula One World Championship takes place in three weeks’ time. In a lovely bit of irony, we’re going from Russia (with love) to the good ol’ USA. It’s the third trip for Formula One to the heartland of Texas for the United States Grand Prix at the Circuit of the Americas in Austin, Texas.

Once again, this is a track that favours Lewis. In two races in Austin, he has an average finish of 2.5 with a win and a worst finish of 4th. Nico’s best finish is 9th with an average finish of 11th. Rosberg needs to find a lot of pace and maybe even a miracle if he’s going to be able to claw back points in the championship chase.