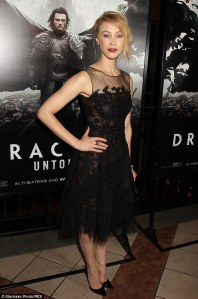 It’s Saturday again, so it’s time for another edition of the Entertainment Link-Off. There’s no notable releases in Australia this weekend, but the folks in North America can now catch Dracula Untold. The first of the craptacular monster movie series from Universal. It’s not all bad though. Luke Evans is a good leading man. Tywin Lannister is in the movie. Also leading lady Sarah Gadon is worth the price of admission. So let’s start off the ELO with her.

After the jump, The Flash meets his greatest foe a lot sooner than expected, Lego Batman is fast-tracked to the big screen, Woody from Toy Story can be quite scary, a hilarious honest trailer for Transformers 4 and listen to Taylor Swift cover a popular Aussie song.

Now we all know about Reverse Flash, the arch-nemesis of our superhero Flash. It looks like we would be seeing him a lot sooner than initially thought in the new CW series! (Screen Crush)

Lego Batman was so popular that WB is looking to fast-track a Lego movie spinoff featuring the ridiculously hilarious caped crusader. (The Hollywood Reporter)

Here’s a look into the Wolverine/Storm romance that didn’t quite make the cut in X-Men: Days of Future Past. (Yahoo)

Bill Murray has showed support for an all female Ghostbusters reboot, but Ernie Hudson doesn’t think it is a good idea. (The Telegraph)

Thank goodness! The Death Cure, the third and final entry of The Maze Runner series will not be split into two movies! (Digital Spy)

Good news. The Walking Dead has been renewed for a sixth season! Meanwhile, I’m still waiting for the fifth season to air! (Variety)

Ditto! How “Arrow” is getting superhero television right. (Buzzfeed)

We all know Calvin and Hobbes are always up to no good, but ever wonder how much their shenanigans would cost Calvin’s poor parents? Let’s just say it’s a lot. (Entertainment Weekly)

We all love Honest Trailers and the latest video focuses on Transformers: Age of Extinction.

Disney has recently released the teaser trailer for Brad Bird’s latest flick Tomorrowland. The short clip might not reveal much, but it looks damn impressive.

Love her or hate her, you gotta admit, Taylor Swift’s cover of Vance Joy’s Riptide is pretty darn good.