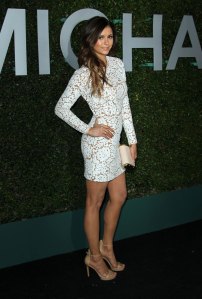 It’s not often that I run a bunch of sports links in one of my linkdumps but it’s not often that a new NHL season starts. It only comes around once per year and it gets pretty close to a national festival in Canada. Basically, it’s the Canadian equivalent to the start of the NFL or EPL seasons.

So let’s start this post off with a good Canadian girl. Here’s Nina Dobrev.

The story of the 2014 NHL offseason was the analytics boom. While fancy stats are common place in baseball and pretty common in basketball and soccer, hockey lagged behind those sports until now. (MacLean’s) I told my Leafs loving associates about things like Corsi, Fenwick and PDO last year and they ignored me right until the point where the Leafs crashed out of playoff contention and realized I explained what would happen all along.

The NHL’s move to Sportsnet has seen many changes. The biggest change is in the host’s chair which see Strombo replace Ron MacLean whose contentious relationship with NHL Commissioner Gary Bettman has seen him pushed aside. (The Globe and Mail)

For all the talk that fighting needs to be legislated out of hockey, it appears that the three minutes of ice time per game enforcer may be going the way of the dodo. Less than half the teams will open with an enforcer on their 23-man rosters. (CBC Sports)

A Forum Research poll (whose statistical validity is being questioned) suggests that Doug Ford and John Tory are statistically tied which would have seen Tory’s massive lead quickly evaporate. (City News)

While ebola is reaching epidemic levels in Africa, it could be tire company Firestone who is doing the best job in containing and treating the disease. (NPR)

You’re used to hearing about the sleezy underworld of youth sports politics but you thought that was the extent of terrible people there. However, fraud and theft from local Little League baseball associations has amounted to millions of dollars in stolen funds. (Vice Sports)

Adrian Peterson’s child abuse charges from last month seemed so out of character for him. However, behind the public image lies a very different man. (Star Tribune)

Al Michaels might be 70 years old but he’s still the best football broadcaster in the game right now. (Boston Globe)

Apparently half of women have a backup man at the ready should their current relationship falter. Maybe I should be glad that I’m single. (Philadelphia Magazine)

Have you ever wondered how awkward a Hollywood sex scene is behind the scene? Here’s a look at one that’s SFW-ish. (Gawker)

Maffew has graced us with another Botchamania special that’s all Scott Steiner clips. Who doesn’t want 16 minutes with Big Poppa Pump? The Genetic Freak! The Big Bad Booty Daddy!