Does anybody know what the first rule of motorsport is? DON’T TAKE OUT YOUR TEAMMATE! When you’re driving for a team, the worst thing that you can do is to take out your teammate. It doesn’t matter if it’s accidental or intentional, you won’t win any new friends in your garage.

But that’s exactly what happened in the Belgian Grand Prix. Nico Rosberg clipped Lewis Hamilton on an aborted overtaking move into Les Combes which punctured the Brit’s back tyre and ripped off the German’s front-wing endplate. The fracas resulted in both Mercedes being taken out of contention for the win and the season’s only other race winner, Daniel Ricciardo, picking up his third win of the season.

While the race started with Rosberg leading Hamilton, they didn’t enter La Source that way. Hamilton did what he needed to with a spectacular start to take the lead on Corner 1 of Lap 1. Sebastian Vettel grabbed 2nd off the start but a mistake at Les Combes handed the place to Rosberg. 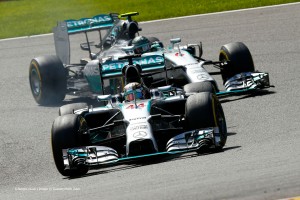 Lap 2 was the critical one, though. Rosberg tried passing Hamilton around the outside of the right-hander at Les Combes but couldn’t complete the move. As Hamilton took his line for the left, Rosberg didn’t back out quickly enough and tagged Lewis’s left-rear. The result was a puncture that ruined Hamilton’s race and left him out of the points and retiring early to save his car. Rosberg lost his front-wing endplate which reduced his speed and required a long pit stop to replace the wing which left him back in traffic.

The beneficiary was Daniel Ricciardo who was able to get by teammate Vettel and attach himself to Rosberg’s gearbox before the German driver made his first pit stop. From there, Ricciardo was able to storm out to a massive lead while the battle occurred behind him. Rosberg was able to claw forward despite picking up a piece of debris (part of a tyre or a banner ad) that clung onto the radio antenna and strung back towards Rosberg’s helmet. It didn’t affect his drive but it looked like it should.

With Rosberg’s race compromised by the wing damage and a vibration that forced an early second stop, it looked like he wasn’t going to have a shot at even the podium. However, a late call for a third stop allowed him to scythe through the field and mow down Ricciardo at a rate of better than three seconds per lap at times. However, as the new tyre advantage wore off, Ricciardo was able to hold on for the win but it was close for a while.

The win was Ricciardo’s third of the season and certainly shows that there might be some merit to the Red Bull driver development program now that they’ve got a successful driver who’s gone completely through their system unlike Vettel who had some help from BMW before his success. Rosberg’s second place allowed him to stretch his Drivers’ Championship lead to 29 points over Hamilton. And Valtteri Bottas rounded out the top three to score his fourth podium in the last five races.

Kimi Raikkonen scored his best finish of 2014 with a 4th. Sebastian Vettel won an epic battle for fifth ahead of Jenson Button. Kevin Magnussen did finish 6th but was given a 20-second time penalty for forcing Fernando Alonso off-track. Alonso came home 7th after damaging his front wing on the final lap. Sergio Perez finished in 8th. Ninth was Daniil Kvyat. And Nico Hulkenberg was the biggest beneficiary of the Magnussen penalty as he was able to continue his streak of points-scoring finishes in 10th.

We’re not done with the Rosberg/Hamilton incident yet. The stewards let that one go as a racing incident. I thought it looked like Rosberg thought Hamilton would give him a bit more time and room to back off but it was more negligence than maliciousness that caused the contact.

However, Hamilton revealed that in the post-race debrief, Rosberg admitted that he kept his nose in next to Hamilton “to prove a point.” Whether that means that Rosberg tried to hit him to take him out or Rosberg didn’t care to avoid the collision might be a distinction worth noting. Either way, Rosberg admitted to intentionally causing the collision so I can’t imagine the team is too happy.

Of course, if the Mercedes bosses are pissed off at Rosberg, there’s not much they can do about it. If you’re Mercedes, how are you going to punish your likely World Champion without making a mockery of the World Drivers’ Championship by handing it to Lewis? The way this season is going, I don’t think that team ordering them to not attempt an overtake will work. We’re reaching a point where Lewis and Nico could repeatedly Prost and Senna each other to the point that Ricciardo wins the championship through Mercedes stupidity.

It was an interesting week (or really only from Wednesday onwards) for the two teams at the back of the pack.

The new regime at Caterham decided that the best way to catch and pass Sauber and Marussia for the money positions in the World Constructors’ Championship was to bring in Audi LMP1 ace Andre Lotterer to give the team a boost in Belgium.

Oddly, though, Lotterer didn’t replace Marcus Ericsson but Kamui Kobayashi for this race. Considering that Kobayashi has been far and away the better Caterham driver, I assume that there was some financial consideration that kept Ericsson in the car and forced Kobayashi out.

Speaking of financial considerations, that was why Marussia changed drivers temporarily on Friday. Alexander Rossi was announced as the second driver alongside Jules Bianchi on Thursday. Max Chilton’s PR team issued a statement saying that he stepped aside “voluntarily” so the team could “sell” his seat to raise money.

Rossi got through first practice before Chilton was back in the car. It seems as though there was some sort of “contractual issue” between Chilton and Marussia that was solved during FP1. The whole of the F1 press seems to think that Chilton’s backer were slow with payment and pulling him out of the car encouraged them to cut the cheque to get Max back in the car. 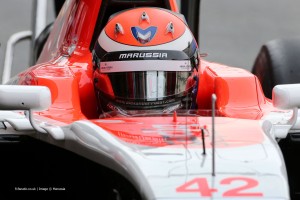 Amid all the Chilton drama, a rumour cropped up that a group of American investors are interested in buying Marussia. It seems almost fitting that the team has an American reserve driver that almost ran this weekend and now we hear about an American group trying to by that same team. With Haas F1 coming in a couple of years, we might see a whole lot of American interest in the coming years.

Of course, all the drama at the back of the grid did nothing to change either team’s fortunes. Lotterer was the first car out with engine troubles while Chilton finished 16th but he was the best of the new teams.

There’s also a rumour that the driver swap won’t be a one-time thing at Caterham. Formula Renault 3.5 championship leaders Carlos Sainz Jr. and Roberto Merhi are on Caterham’s short-list to replace Kobayashi in future races. Merhi has confirmed that he’s already run in Caterham’s simulator so he might be the first one to get a crack at F1 with Caterham.

There was also a rumour I read that indicated that Red Bull could be looking at buying seats for drivers in its ever-expanding junior program at Caterham. Red Bull was reported to be trying to get a seat for Sainz at Caterham around the British GP this year before they decided that they’d rather he concentrate on FR3.5 this year. With Merhi under consideration, though, it’s not looking like just a Red Bull deal as Merhi is a Mercedes Junior Team driver.

There was a little silly season news over the break. Max Verstappen, son of Jos, will be joining Toro Rosso in 2015 which will make him the youngest driver in F1 history at only 17-years-young.

Considering that Red Bull’s driver development program includes the aforementioned FR3.5 championship leader Carlos Sainz Jr. and GP3 leader Alex Lynn, Verstappen’s promotion to F1 comes as a bit of a complete surprise. While Verstappen is 2nd in European F3, he was also considered the hottest unsigned prospect in motorsport. It was believed that Mercedes was trying to sign him to their Junior Team program but the offer of an F1 seat made the difference.

In case you were wondering, there are three drivers whose earnings top Formula One. Alonso, Raikkonen and Vettel each earn an estimated $29.3 million for the 2014 season. I’d say that they’re earning every penny but it’s hard to tell considering how far behind their teams are behind Mercedes.

Speaking of Mercedes, Hamilton makes $10 million more than teammate Rosberg ($26.4 million against $16 million). Lewis is the 4th highest paid driver while Rosberg is 6th though I’d imagine Nico could be up for a raise soon if he brings home the championship. The only other driver with a win this season, Daniel Ricciardo, appears to be on the Toro Rosso pay scale. Ricciardo makes $1 million which is good for 15th on the grid. I’d suggest that he’s definitely earned a bigger paycheque next season. 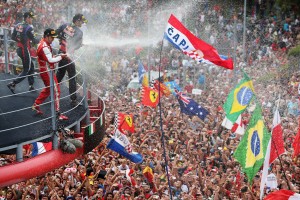 The next round of the 2014 Formula One World Championship is the fastest race of the season and the final race in Europe. The teams will conclude the final six races of the season in flyaway races a long ways from their bases in England, Italy and Switzerland. But before all that, it’s the other race that everyone wants to win. It’s time for the annual trip to Monza for the Italian Grand Prix.

While downforce played a bit of a role in Spa, there’s no need for downforce in Spa. Sure, the Lesmos and Parabolica could benefit from a bit of downforce but any speed gained in the corners from downforce will cost you too much speed on the straights to be of any benefit. So it’s a straight power battle unless there’s a hell of a lot of rain.

So with that being said, the only team that I’d give a chance of stopping Mercedes is Williams. We’ve seen that their cars work well when low-drag is the key. At Monza, a slippery car with low downforce will be the most likely to succeed. That should make Williams the favourite. However, twelve races so far this season tell me that my money should be on Hamilton or Rosberg.