Heading into Saturday night’s IndyCar 300 lap race at Iowa Speedway, Andretti Autosport had won four straight and five of seven races at the track. The other two races were won by Chip Ganassi Racing. For most of the race, it looked like CGR’s Tony Kanaan would end Andretti dominance but a great strategy call and a hard charge at the end made it five in a row for AA with Ryan Hunter-Reay taking the checkered flag.

The start of the race was moved up due to the threat of inclement weather but that didn’t affect the race very much. There was a red flag just after the 40 laps for some light rain but it wasn’t nearly as bad as some were predicting. As a result, the pre-race prediction of a scramble to the front by lap 151 of 300 never came true.

The race started with Scott Dixon on pole with Tony Kanaan alongside and Ryan Briscoe in 4th. The Ganassi cars dominated both qualifying and the race. While Dixon led at the green flag and through Lap 1, you can’t stop Tony Kanaan when the cars are unleashed. He only had to make one pass to get to the point but you knew that his hard charging style meant he was going to the front sooner rather than later. 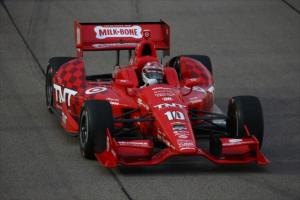 Kanaan led until the first caution (for rain) when Helio Castroneves took the lead on the exchange of pitstops and led for the next 34 laps. When Helio’s stint on point ended, it was Kanaan back out front again. All told, Kanaan led 247 of the 300 total laps of the race.

Despite his dominance, it all came undone in the end for Kanaan. A late race caution when Ed Carpenter chopped down and hit Juan Pablo Montoya bunched the field up for the final ten laps. During the caution, a number of cars farther back in the field dove to pit lane for tyres and a splash of fuel to push to the end of the race.

The first car off pit road was Ryan Hunter-Reay who looked a bit like Tony Kanaan in the way he charged to the front on the restart. In nine laps, RHR went from 9th to the lead as he carved through the field on fresh rubber. Kanaan was absolutely helpless for the second straight race as he saw a dominant race torn from him because of a strategy call.

The win makes RHR the first driver to score three wins on the season. However, he remains in 3rd in the Drivers’ Championship, 32 points behind Castroneves. Josef Newgarden was the better of the late-race chargers as he went from 11th to 2nd and felt he was a few laps from challenging RHR for the race win. For the second straight race, it was heartbreak for TK as he finished 3rd despite deserving the win.

Scott Dixon was 2nd behind his teammate at the final restart but held station with him falling two spots to 4th. Ed Carpenter wasn’t penalized for the Montoya incident so he held onto 5th. James Hinchcliffe also tried a late stop and was rewarded first oval top ten of the season in 6th. Graham Rahal made up eight positions from the start to 7th. Castroneves took the championship lead by finishing 8th. Ryan Briscoe crossed the line in 9th. And Charlie Kimball made it all four Ganassi cars in the top ten by finishing 10th. 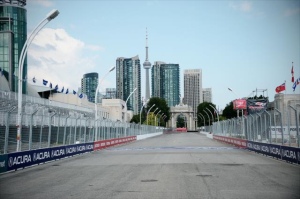 The next round of the 2014 IndyCar series season is the final doubleheader and final street course event of the season. The series make their lone trip north of the border to Canada for the 2 in T.O. on the streets of Exhibition Place in Toronto.

Since the merger, Ganassi Racing has won four of six races including a doubleheader sweep by Dixon in 2013. Seeing as he’s the only CGR driver with good road and street course results this season, he’s their best bet for a good result this coming weekend.

This season, we haven’t seen anyone really dominate on street courses. Will Power finished top two in the first four street races and missed the top ten in both Houston races as part of his cold streak that has seen him finish outside the top ten in four-straight races. Granted, if you remove bad luck, Simon Pagenaud would also be a favourite for Toronto. If you’re looking for a darkhorse, two podiums from six street courses means Carlos Munoz has quietly become a strong street course driver to go with his oval prowess.