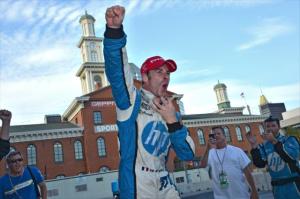 The Baltimore street circuit has given us some memorable moments and races in its previous two appearances on the calendar. It’s amazing that it’s been as racy as it has because it’s very bumpy and very narrow but, somehow, it results in a good show.

That was the case in this weekend’s IndyCar Grand Prix of Baltimore. The narrow city streets of Baltimore and tight corners resulted in Dallara being the big winner of the weekend as they’ll make a mint off of selling replacement parts. On track, it was Simon Pagenaud who kept his nose relatively clean en route to his second win of the season.

While I liken the race to a demolition derby, the race was fairly clean to start. After their controversial pit road run-in and penalty at Sonoma, it was Scott Dixon leading Will Power to the green flag. The pair would battle early with Power coming out on top. Sebastian Bourdais established an alternate strategy early which allowed him to move to the point as the Oceanic pair pit for tires and fuel.

It took until Lap 48 of the 75 lap race for all hell to break loose. On a restart, Graham Rahal tagged the back of Dixon’s car heading into Turn 1 which turned the hairpin into a parking lot. That was only the first in four successive cautions caused by restart incidents which highlighted the ridiculously tight nature of the Baltimore circuit. 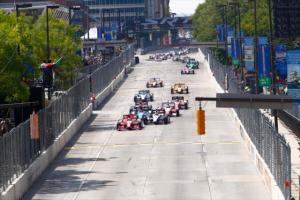 On the next restart on Lap 53, the championship was turned on its head. Dixon pulled out of line to make a move on Power but he did the same to pass Bourdais. Instead, Power collided with Dixon and put him into the frontstraight wall. While the damage was repairable, IndyCar didn’t return the car to the pits for repair so Dixon’s day was over early.

The next two restarts were also fairly short. Lap 57’s restart also made it one turn as Oriol Servia spun Bourdais into Turn 1 which clogged the track. The Lap 62 restart didn’t have a pile-up in Turn 1 but the hairpin at Turn 3 which led to another caution.

When the race finally resumed with nine laps to go, it was Marco Andretti who was able to survive well enough to lead the race. However, front wing damage left him easy pickings for Simon Pagenaud who made the pass for the lead into Turn One. His day wasn’t done yet as Sebastian Bourdais ran him side-by-side into Turn 7 but Pagenaud was able to hold his ground and the lead en route to the win. 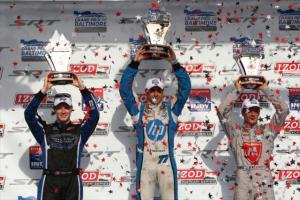 Pagenaud’s win was his second of the season and vaulted him up the drivers’ standings to third place. Josef Newgarden scored his best career finish and first podium by crossing the line in 2nd place. Bourdais picked up his third-straight podium on street courses with a third place finish.

Justin Wilson looked strong at various parts of the race until he was punted by Bourdais on Lap 62 but pulled out a 4th. Simona de Silvestro kept her nose clean and was rewarded with her first Top 5 since St. Pete 2011 to make it a happy 25th birthday. Charlie Kimball was the best of the Ganassi boys with a 6th. James Hinchcliffe stalled it in that Lap 62 caution but climbed back to 7th. Sebastian Saavedra looked like he was going to scythe through the field during the final stint but couldn’t get higher than 8th. Helio Castroneves recovered from some early incidents to score a 9th. Marco Andretti and his half of a front wing rounded out the top ten.

With IndyCar looking to end the 2014 season in September and teams unhappy with the six-month layoff between the 2014 and 2015 seasons, IndyCar is looking internationally to fill in the gap between seasons.

The working plan is for the IndyCar Series to go on a non-championship international tour to venues across Asia and the Middle East. The idea is to use these events to increase sponsorship revenue for the teams and grow IndyCar’s brand overseas.

Currently, Penske and Ganassi aren’t sold on the international series of races because IndyCar hasn’t presented much in the way of details. They’re also concerned as to whether these races will help IndyCar’s profile in the US.

Surprisingly, it’s the smaller teams who are in favour of this plan. Both Bryan Herta and Sarah Fisher saw the potential overseas tour as a positive. They see the races as a good opportunity to add sponsors and increase the value brought to current sponsors. I would have guess that it would’ve been the other way around.

With the P1 class of the American Le Mans Series disappearing as part of the merger of ALMS and Grand-Am into the United Sports Car Series, the P1 teams have to come up with a new plan for racing. For ALMS P1 championship leader Pickett Racing, it looks like IndyCar might be in the cards for next season. 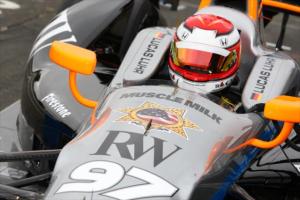 The team entered last week’s Grand Prix of Sonoma fielding a car for Lucas Luhr prepared by Sarah Fisher Hartman Racing. Luhr may have only finished in 22nd in his first IndyCar race (and first open-wheel race since running German Formula Three in 1998) after retiring with a mechanical issue but team owner Greg Pickett was very interested by his IndyCar experience.

According to Pickett, the operating costs of IndyCar aren’t significantly different from his current P1 costs. He would have to get some new cars and equipment but that would be required if Pickett Racing were to change classes to run in USCR. The fact that Pickett has an existing relationship with Honda (through Acura) in ALMS helps matters too.

I’m selfishly hoping that Pickett makes the move to IndyCar. Getting the car count up can only be a good thing for the series. That and adding a passionate racer-turned-owner to the series makes it unlikely that Pickett will close up shop if the going gets tough.

It’s not quite an IndyCar story but since he’s a Champ Car vet, I think that this is still relevant to this column.

Did you see Max Papis get slapped? On the last lap of the NASCAR Truck Series race, Papis was divebombed by Mike Skeen resulting in both ending up off track. For some reason, Skeen, his crew and his girlfriend thought it was Mad Max’s fault even though replays seem to show Skeen was entirely in the wrong.

However, post-race, Skeen battered into Papis with his truck and exchanged words while on track. When Papis parked the car after the race, one of Skeen’s crewmen tried climbing in through the window to assault Papis but was tackled by two of Papis’ crew members. Finally, Papis was slapped by Skeen’s girlfriend. Papis said that the slap dislocated his jaw.

And I thought that the IndyCar race was going to end in a fight but it was certainly nothing close to the Truck race at Mosport. And we all thought that Bristol was the track where brawling happened. It looks like NASCAR’s action tracks are the ones with right turns. 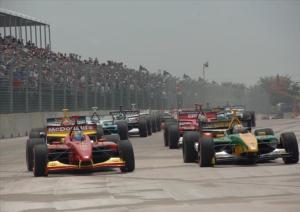 The next IndyCar Series race is a short five weeks away. That’s right! We have a month-long break between two races in the stretch run of the season. Randy Bernard did a lot of good things in his brief tenure as IndyCar CEO but this part of the schedule was not one of them. This is supposed to be fixed for next year but we’ll have to see what IndyCar brass come up with, especially with that international tour under consideration.

The next race is the Grand Prix of Houston and is the third and final doubleheader weekend of the IndyCar season. As such, Houston will host the third and second-last races of 2013. The last Houston race was a Champ Car race in 2007. Both Champ Car races held at Reliant Park were won by Sebastian Bourdais.

Given his recent run of success on street circuits, you have to think that Bourdais can break through this weekend. Graham Rahal finished 2nd in his third career Champ Car race at Houston and could ride improving form to a good result. And don’t count out Scott Dixon. He’s got to be hungry for a win or two after his bad luck at the last two races.