The Microsoft keynote event at E3 is about to begin and it doesn’t really matter. Over the last few weeks, Microsoft has repeatedly shot itself in the foot when promoting their upcoming Xbox One. They think that they can do no wrong with their next-gen console but the reality is that the can do nothing right.

Microsoft is walking into E3 thinking that they’re Justin Bieber, they’re on top of the world and full of swagger. They are Justin Bieber but everyone sees them as Justin Bieber, self-important douche, with a bit of Amanda Bynes’ delusional separation from reality.

As I’ve mentioned in a previous column, Microsoft is marketing their Xbox One as a console for the casual gamer by adding live TV viewing, Skype and fantasy sports integration to the console.

In case you missed it, Microsoft issued a press release last Thursday that effectively confirmed what Microsoft execs told the press and then immediately denied after the Xbox One reveal.

Among the things that we knew that Microsoft confirmed after saying that policies were still being finalized were the online check-in every 24 hours, a broadband internet requirement, game rentals are effectively dead, and the Kinect has to be connected to your console.

These things should all be fairly concerning for the average gamer. Not everyone has their Xbox 360 online and not everyone online has a fast enough internet connection for Microsoft’s tastes. If you’re GameFly, you’re hoping that your Xbox users switch over to PlayStation because you could quick end up out of business.

And I don’t care what Microsoft says, if hackers can turn on my webcam, I’m sure they can do that to a Kinect too. Not to mention that Microsoft was the first company to sign up for the NSA’s PRISM surveillance program in 2007. If Microsoft has been allowing the NSA to secretly spy on us for six years without telling us, I’m really going to believe them when they say that there’s no privacy concerns with the Kinect.

However, it gets worse. Used games won’t be banned by Microsoft because they’ve left it up to the publishers to set used games policies. That would be the same publishers that have been, at best, attempting to disincentivize the purchase of used games and, at worst, crush the second-hand market altogether. No wonder why EA ended the online pass system, the Xbox One will give them power to set restrictions on games without the single-use code. For the sake of balance, the PlayStation 4 will do the same thing. 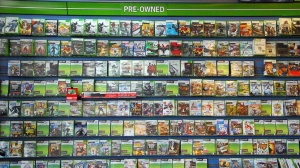 If allowed, you can still sell your old games but the system is skewed to the advantage of “participating retailers.” Yes, Microsoft is only allowing selected retailers to sell used games. Basically, Gamestop can still sell used games after being vilified for the last stretch as the cause of the financial woes of the games industry.

Private game sales and loaning of games is a little less encouraging. Loaning isn’t allowed yet. You can play a game on a friend’s console if you log into your account and check-in hourly. To sell a game, you have to transfer your license to play the game to an Xbox Live friend who has been on your friend list for at least 30 days and can that license can only be transferred once. Presumably, “participating retailers” won’t have that restrictions. I actually kind of wish I could gift games I’ve played to friends on Steam so I’ll give Microsoft a little credit for that but they’re still killing private used games sales.

On the plus side, you can share games with a family list. Xbox users are allowed to designate ten people as family and share games with them. Only one family member can play one of your games at a time so you can’t play CoD with cousins Billy and Suzie at the same time but you can with just one of them. How you designate family members and what stops you from putting ten friends on your family list hasn’t been disclosed yet.

You can even let anyone play any games tied to your home console. If your friends come over and want to play your game on your console, they can without any DRM issues. That’s a massive and revolutionary feature on the Xbox One that we haven’t had since… Oh, wait! We’ve always had that!

So what Microsoft has finally copped to is that some of our worst fears for the next generation of home consoles have come true. I can appreciate that legitimate money losers like piracy are a concern but that doesn’t excuse trying to end the second-hand market, the privacy concerns of an always-connected Kinect or the likely occurrence of server issues that leaves the Xbone unable to play games for some or all users.

The scary thing is that people are still trying to justify these so-called features of the Xbox One. Justification like having to be online to use Steam while ignoring that no other console in history requires me to be online to play games and that I use my PC for more than just gaming. Sure, there aren’t used games or games trading on Steam but I’ve also never paid $60 for a game on Steam because I can easily find great deals on games which is something we seldom see for console games.

My internet is catastrophically slow. I can’t game online without a ton of lag. So you know what I do? I don’t play MMOs and I don’t do much online multiplayer. I play single-player games and game offline. That’s done me pretty good my whole life. What Microsoft is doing is punishing me for having a terrible ISP so I can’t use the Xbone if I actually wanted to.

I’ve said it before but I’ll say it again. Microsoft is smart to shove this news before E3. The only places that will cover news about the Xbox One are gaming sites. Casual gamers aren’t going to know or worry too much about all the issues that the core gamer has with the Xbone because they don’t frequent these sites. That allows Microsoft to focus on the games which is all that the mainstream/casual media will cover, if they cover E3 at all.

So if I think that the casual gamer won’t care about Microsoft’s underhanded restrictions, why do I think that the Xbox One won’t win the console war against the PS4? Among the core gamer base, I’d be shocked if even half of current Xbox 360 users get the XB1. Treating people like thieves with check-ins and DRM isn’t a good way to appeal to people.

They could also be cutting out part of the casual gamer market. There’s nothing beyond exclusive games for most users outside of America who won’t be able to take advantage of many of these apps the Xbox One runs. Only 73% of Xbox 360s are online while only 68.2% of Americans have broadband internet. In theory, that could cut one-third of Microsoft’s user base out without being able to choose to buy it or not. That doesn’t include other parts of the world with spotty internet connections. You could easily start a campaign accusing the Xbox One hating the troops since I doubt that soldiers in the field have 24/7 broadband internet connections. 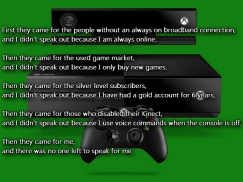 Most importantly, people talk. While Little Jimmy and his mother might not visit here or IGN or another gaming news sites, they do hear people talk. Twitter was abuzz with discussion about the console. One would imagine that the same talk would carry over to Facebook and the Xbox fan page which could then trickle down to John, the white-collar grunt, who games to unwind after ten underpaid hours on the job.

Microsoft is banking entirely on the uninformed public buying the Xbox One despite the consumer rights that the so-called features strip from the people who buy the system and that core gamers will buy the console to continue playing Halo. No wonder why Halo 4 came out on the 360. It was so people would have to think about giving up the story part way through if they don’t get the Xbone.

Microsoft ended their press release by saying that they would listen to our feedback and may change its policies as a result. However, between their announcement and this release, Microsoft had two weeks of very clear user feedback about their policies and they didn’t listen. The only thing that will get their attention is when console sales fall massively below expectations and targets. At the end of the day, the only way we can get Microsoft’s attention is with our money.