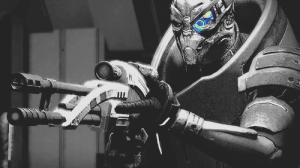 The discussion seemed to focus on Garrus Vakarian, Shepard’s trusty Turian sidekick, with both Hudson and Everman suggesting that there was plenty of potential for Garrus stories. Both said there were plenty of pre-ME1 stories to tell about Garrus’ time with C-Sec but Everman thought an overarching Garrus story that included his time as the vigilante Archangel would make a great game.

Watamaniuk thought Grunt could be the focus of a spin-off in a title that had a lot of melee combat as only the Krogan can. Walters wants to learn more about Aria, The Illusive Man and Kai Leng. And Gamble wants to look at Javik before entering cryogenic-freeze and adapting to the galaxy after the last Reaper War. 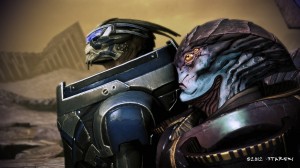 If you ask me, some of these concepts are more appealing than others. I did pitch a Garrus spin-off game some ten months ago. While Javik wasn’t one of my favourite ME3 characters, his story from 50,000 years before ME1 would be a great way for BioWare to stretch its creative legs as any technology or story decisions would be wiped out by the Reaper apocalypse so they could have choices without screwing up canon.

Walters’ choices aren’t particularly appealing because those backstories have been covered in Mass Effect novels and comics. Grunt’s story could be interesting, especially if it ran post-ME2 and parallel to ME3, but I wouldn’t call it a must-buy and I’m a massive Mass Effect fan.

There are a few other characters who would make good spin-offs that haven’t been pitched by the BioWare crew. A Jack origin story would feature awesome biotic combat and some intense story moments considering the past that she told Shepard about in ME2 that turned her into a biotic bad ass.

I wouldn’t mind seeing a Liara follow-up story that examined what she did with her life after the Reaper War. She went from being a naive archaeologist studying the Protheans to discovering the true history of the galaxy while fighting a war for the fate of all life in the galaxy. Now that’s she’s a battle hardened Asari scientist, I’d love to see what happens to her after the end of the war is won. 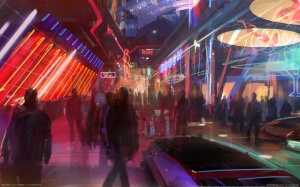 By the way, is anybody else worried that the brains behind Mass Effect don’t seem to know where to go with Mass Effect (don’t call it) 4? I thought they were doing a Dragon Age: Origins-esque sequel set in the future that didn’t deal with a galactic apocalypse. Now, it sounds like they haven’t settled on a concept yet.

I hope they weren’t shooting for a release in the next 24 months because I’m not certain it will turn out well. Going from no plan to finished game in about 22 months (assuming a Q1 2015 release) seems a bit rushed to have the perfectly polished game that BioWare needs to release to cleanse itself of the struggles of the last 18 months.

As long as a spin-off is just a way for BioWare to bide their time until ME4 and not the plan going forward, I can live with it. I’m still holding out hope for Mass Effect: Origins.

One thought on “Garrus Effect? Your Favourite Turian Could Star in a Mass Effect “Spin-Off””