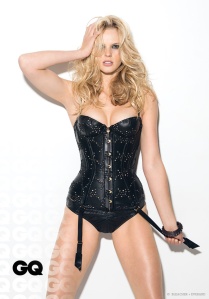 Sorry about the week starting off a little slow on posts. A lot of time went into last week so we’re a bit behind on this week. There are a couple of good gaming posts to close the week that I’m sure you’ll like. For now, here’s the most featured woman in SI Swimsuit history, Anne V.

The big story of the week is NBA player Jason Collins coming out of the closet to make him the first player in an American team sports league to “come out of the closet” as gay. (Sports Illustrated)

President Obama is having trouble getting his agenda through Congress. Compromising isn’t getting him far. He may just have to use his charisma to get his policy proposals through. (Washington Post)

The Harper Conservatives swept to power promising fiscal responsibility. Good luck running the on that when you’ve just lost $3.1 billion that was supposed to go to an anti-terror program. (CBC News)

If you visit George W. Bush’s Presidential library, be prepared for a little bit of revisionist history… Or is it something closer to Orwell’s 1984? (Gawker)

Back to Jason Collins for a second, ESPN’s basketball insider Chris Broussard went on a rant that could be taken as homophobic but must definitely be called excessively controversial. (Deadspin)

Don Cherry has caught a lot of flack for saying that female reporters shouldn’t be in the locker rooms (and you should watch the whole video because he tries to recover by saying that the players can’t be trusted around women). However, he has a reputation for being one of the most progressive men about women in hockey. Confusing, isn’t it? (espnW)

Let’s cheer up a bit with some hilarious classic WWF/E promo photos. (With Leather)

Given that Far Cry 3: Blood Dragon, it’s only fitting to run this feature-length profile of game developer and publisher Ubisoft. (New York Times)

I jumped from the NES to the PS1 growing up. That was an absolute jump in terms of graphics and power. That’s probably why I look at some of those games with such fond nostalgia. Anyway, here’s 19 signs that you were a PS1 addict. (BuzzFeed)

Anthony Bourdain did a live Q&A over on Warming Glow. It’s filled with plenty of nuggets of Tony goodness. (Warming Glow)

Somehow, I missed this video of Charlie Brooker breaking down all that was wrong with the US media coverage of the Boston Marathon Bombings.

What happens when Super Mario gets mashed up with Ghostbusters 2?